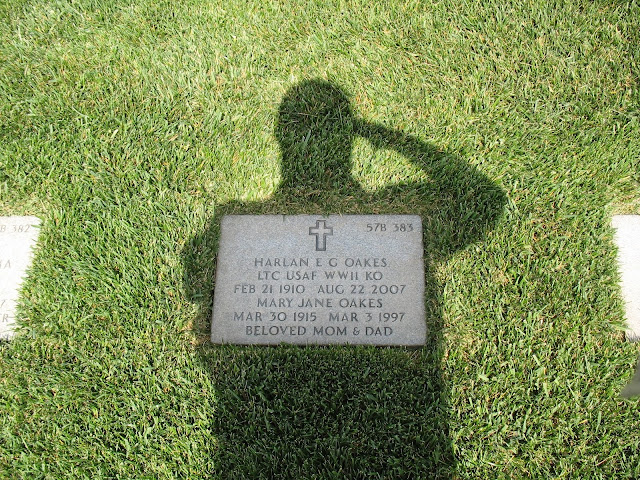 Today would have been my parent's 60th wedding anniversary.  My mother and father would be 95 and 100, respectively.  Mother always said she did not want to live to be "too old" though I'm not sure she meant "old" so much as "infirm".  She did live to be 81 but was bedridden the last 18 months of her life, felled by strokes.  That was the kind of infirmity she dreaded.  Mercifully, she died in her sleep.  She loved me unconditionally and it was wonderful.
Dad lived to be 97.  He's been gone three years now.  It's hard to believe as he was such a presence in my life, mostly an irritating presence, but a presence nonetheless.  I loved my father but he worried too much and he gave way too much advice.  It's hard taking advice when you're in your fifties...forties...etc.  I find myself doing the same damn thing.  The apple doesn't fall too far from the tree.
My brother called to remind me today but I already knew.  I'd been thinking about this anniversary for weeks.  We talked a bit about them; how much we miss them.  We both agreed it's amazing to be married that long.  Our parents married late and both had previous spouses but no children.  I suppose my husband and I can hit that number because we married 35 years ago and we're both only 50.  Why yes, it was a shotgun wedding...
There is a common wisdom that says one can never again be a child once their parents have died.   I have begun to think that is true.  I know it in the deepest part of my Id.  I know I can never again feel the warm comfort of my parent's arms about me, their kisses on my forehead, my father's hand holding mine.  I can talk to them but I cannot be with them.  And I really really miss that.
The older I become, the more I appreciate their wisdom, their sacrifices, the tragedies endured and the many gifts they gave me, not least of which are my values. As our parents leave us, the little irritations fade and the good things move to the forefront.  As Martha would say, "It's a good thing."

Posted by California Girl at 11:09 PM

Thanks for the deep and moving post. I wish I had some fond memories of my parents.

smiles. happy anniversary...T lost her mom a few years back...when we are in her hometown we will go visit and share stories...

Pat: I thought of you while writing this. I know everyone does NOT have happy memories. For that I am deeply empathetic. Thank you for commenting.

Brian: Thanks B. Sharing stories is always therapy and it does fill a void.

That was a nice post. My wife and I got married at 26 so I guess we could technically make it that long, but I'd better make some lifestyle changes pretty quick.

What a lovely picture and post. I lost both of my parents to heart disease while they were in their sixties, and Mama has been gone since 1993. She is still present in my heart. Daddy has been gone since 1979. But you know, the dates they left us are some of my life milestones. Things change when they are both gone and you are technically orphaned.

Lovely tribute to your dear parents, on their anniversary. I, too, was blessed with loving parents, for which I am very grateful.

You squeeze a lot of wisdom into a short post. And on so many levels, the photograph is perfect.

Im an orphan and a widow so know the feeling. I miss those hugs as well but never visit their graves, I prefer to see them in my minds eye, alive and happy and to remember them as they were. My inlaws are celebrating their 60th on the 5th November, quite a milestone isn't it?

The 28th of this month would be my own parents' 70th, if they were still alive. My dad died two days before their 28th, however, a year younger than I am now! My mom stayed around to "look after" my sister and myself until last December. Thanks for bringing up some of my own good memories by sharing yours. Very nice post... and I loved the photo's composition!

Dear Cap'n: I know exactly what you mean.

DJan: I never think of myself as "orphaned" but I have been wondering what I would do if my husband died. I realize how alone I would be and how much I depend on him emotionally.

Marguerite: Those of us fortunate enough to have loving parents are blessed. No question.

Alan: That is kind of you. My brother took the photo while saluting the gravestone. I find it quite touching.

Baino: I know you're on your way to Par-ee today but I often wonder about being both "an orphan and a widow". Must be very lonely at times.

Hi Foxy: That's a nice comment to make about your mother "looking after" you and your sister. Sweet. That is the one thing I look to my husband for: looking after. Hadn't thought of it in quite that way but you position it perfectly.

Your parents would have loved this post, Cali. :) You remember the things that are most important! Happy 60th to them!

This is a lovely tribute to your parents. I don't remember much about my parents' marriage. I was 9 when my dad died. It was his second, and my mom was 23 years younger than he; in fact, he had grown sons who were nearly the same age as my mom. You were lucky to have had your mom and dad as long as you did. My mom passed away when she was 72, the same age as my dad when he died. I still miss her very much...23 years later.

You are so right. "Once a parent dies you can't be a child again." You are so fortunate to have had your parents for so long. Both of mine were gone by the time I was 23. I would have killed for a dad that gave way too much advice.

How wonderful that you've managed to stay married in this world for so long. Wishing you many more years together.