from Pigments Through the Ages:
Red is supposedly the first color percieved by Man. Brain-injured persons suffering from temporary color-blindness start to perceive red before they are able to discern any other colors. Neolithic hunter peoples considered red to be the most important color endowed with life-giving powers and thus placed red ochre into graves of their deceased. 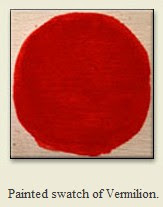 Vermilion
An orangish red pigment with excellent hiding power and good permanence. It's
a mercury sulfide mineral (cinnabar) used from antiquity through to the present though only scarcely due to its toxicity. Made artificially from the 8th century (vermilion), it was the principle red in painting until the manufacture of its synthetic equivalent, cadmium red.

Protective powers of the color red against evil influence were common belief. Objects, animals and trees were covered in red paint, warriors painted their axes and spear-catapults red to endow the weapons with magic powers. Some of the Australian aborigines abide by this custom up to the present times. Neolithic hunters and germanic warriors used to paint their weapons and even themselves in blood of slain animals. Roman gladiators drank blood of their dying adversaries to take over their strength. In other cultures, the newly born were bathed in blood of particularly strong and good looking animals.Red painted amulettes or red gems, such as ruby or garnet, were used as charms against the "evil eye". Wearing a red ruby was supposed to bring about invincibility. Red bed-clothes were customary in Germany up to the Middle Ages as protection against the "red illnesses", such as fever, rashes or even miscarriages. 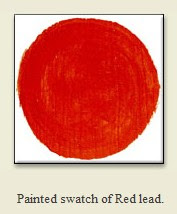 Red lead
A dense, fine-textured red pigment with good hiding power but only fair stability. Red lead was one of the earliest pigments artificially prepared and is still in use today. It was a favourite of Byzantine and Persian illuminators and commonly used in European manuscripts and paintings.  The name "Red lead" comes from Minium comes from river Minius located in north west Spain.

Red rose is the symbol of love and fidelity. According to the Greek legend red roses arised from blood of Adonis who was killed by a wild boar on a hunt. In Greek mythology red rose was a symbol for the cycle of growth and decay, but also for love and affinity. Red rose is dedicated to Aphrodite, the Greek goddess of love and daughter of Zeus and also to Roman goddess Venus. In Christianity the red rose is associated with the Cross and the bloodshed. 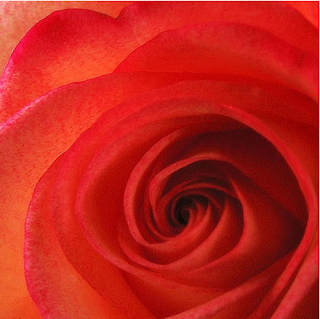 As fair art thou, my bonnie lass,
So deep in luve am I:
And I will luve thee still, my dear,
Till a’ the seas gang dry:

Till a’ the seas gang dry, my dear,
And the rocks melt wi’ the sun;
I will luve thee still, my dear,
While the sands o’ life shall run. 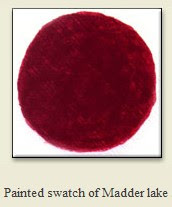 Madder Lake
It's a lake derived from the extract of the madder plant's root (rubia tintorum). It is one of the most stable natural pigments. It was in use by the ancient Egyptians for coloring textiles and then was continuously used until today. By the 13the century, madder was being cultivated on a fairly large scale in Europe, but there is not evidence of its use in medieval or Renaissance painting. Madder lake was most widely used in the 18th and 19th century, though never as extensively as the ruby-like lakes made from kermes, cochineal, brazilwood, and lac. Madder was formerly used in large quantities for dyeing textiles and is still the color for French military cloth.
Posted by California Girl at 10:10 PM

Wow. I actually learned something from your post! Very nice!

SL Studios: I'll take that as a compliment...I think.

Wonderfully informative and poetic as well!

Like the Burns poem! And did not know that about the brain injury...I feel I too, learned something here :)

I always learn something from your posts! :) I didn't know any of those things about the color red.

I love that poem by Burns...it's my second favorite after the Wee Mousie one. It's been a while since I read it and now I know where they got the idea for the song 'Ten Thousand Miles'. My favorite version is from Mary Chapin Carpenter. Beautiful song that never fails to make me cry.

love this post!! so much I didn't know about red... love arcane information.

and thanks for the rabbie poem.... 'tis a beauty!

I've loved red for most of my life. Never knew all of this! Love the info!!

Nice take on the color red - all sorts of info! And a Robbie Burns poem. Thx.

You can never go wrong with a Robert Burns poem!

Love this! It reminds me of color theory in Art School...A fine homage to my favorite hue...:)

wow! LOVED your take on the theme!

do they have these reds in a box of crayola?

Nice take on the theme - the encyclopedic approach!

Now who says the internet's a waste of time. You're right about red being important to Australian aborigines as well. Perhaps I should paint myself red to 'empower' myself for my interviews today?

A wonderful glimpse into the magical color that is red. Happy TT

i thought vermilion was a shade of green. why i thought it was like chartreuse, i have no idea...

Nice. And I appreciate your stop-by and looking at my current collection of red paints.