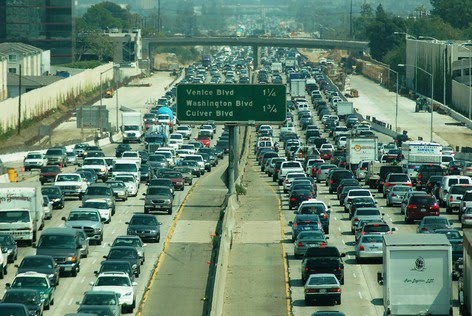 As I sit here watching the Los Angeles Dodgers fold up like a suitcase against the Phillies during Game 5 of the NLCS, I'm thinkin',

"Well crap!  I was born and raised in LA.  What don't I know about traffic?"

I spent many happy and unhappy hours on the freeways of Los Angeles, zooming along in the Sixties when the city was relatively uncrowded and crawling along in the Seventies as I drove from my first married domicile in Woodland Hills to a job on Wilshire Blvd.  It was only 24 miles but it was a guaranteed hour in the morning and 1 1/2 hours home,  if I was lucky.  We relied on the big AM radio stations to give us the freeway updates so we could try and go the fastest route, be it surface streets, through the hills, or even along Pacific Coast Hwy known as PCH to the locals.

During my senior year in high school and my first two years in college, I worked for my father during summer break.   Our family home was also in Woodland Hills.  His office was on Hollywood & Vine.  He taught me the ins and outs of driving the freeways, often keeping to the slow lane because, as he explained, so many cars got off and on you could actually move more quickly.    If there was an accident alert on the radio, he'd take Ventura Blvd. into North Hollywood and pick up the freeway.  Sometimes we'd drive over Laurel or Coldwater Canyons into the West Hollywood side, then east to his office.

Dad's office building is still there.  It's a landmark from an earlier time.  My memories are sweet.  I grew up in a magical time, in a city where everything really seemed golden.  I learned to drive in the toughest traffic city in America.  I am not always a good driver but I can negotiate in traffic and I do drive defensively.  That is the secret.  Always drive as if the other guy is going to make a mistake... not in your favor.

As the DJs might have said, once upon a time, "Time for a musical interlude from one of our favorite performers..."

Nobody does it better than JT.


This just came to me and, since no one else has it up, I'm posting. A true classic!

Whoa! LA traffic! You are a brave BRAVE girl. You couldn't pay me enough money to get into that mess. Well...maybe you could. But it would cost you a LOT. ;-)

I am glad I don't have to face that kind of traffic every day!!
Ohhh, James Taylor! ::sigh::
My entry is here, have a wonderful day.

And I'm used to JT's original arrangement of "Traffic Jam" ever since my favorite radio station in the late '70s would play it every day while I drove home from work. This version was as refreshing as a cool breeze blowing in the car window.

I think London got it right with the congestion zone. Shame they didn't invest in improving public transport to compensate the reduction in drivers...

Growing up in Northern Jersey was pretty much the same deal. Never try going east between the hours of 7 and 10 am and never head west between 4 and 7!!!!!!

Honestly... I know people (I'm sure everyone does)that would never EVER leave LA. Why do they do that to them selves?.. -J

I was "lucky" enough to experience LA traffic about 16 years ago. I was on vacation and I do believe I spent more time actually IN traffic than doing anything vacation-like.

i remember the first time they sent me to cali...they warned me abou tht etraffic, but really...wow. loved the JT vid! got me toe taping this morning.

Loved the video and think I would fold up into the fetal position if faced with LA traffic!
I am a traffic sissy!

Now that is a serious traffic jam....can't imagine driving in that. Where I live you can plan what time you want to arrive before ever leaving home/ha and not even consider any delays.....

back in the late 80s my f had a job offer in LA, I accompanied him on the second visit the traffic was a deal killer for us! we were living in connecticut at the time and used to having lots of things nearby and comfortable with a lifestyle that was heavy on walking and biking and light on driving.

happy theme thursday! may all your drives be smooth as silk!

Just think, Cali Girl, you didn't have to contend with people on their cell phones talking, texting...can't imagine what new levels of excitement THAT brings to L.A. traffic!

Love that J.T.! Especially when he's singing that jazzy, bluesy kind of song....love Steamroller Blues, too!

You DO know traffic, don't you! A couple of years ago two friends and myself were in California for a wedding. We had a free day and drove up the PCH...absolutely lovely...especially for us Ohioans!

For those of you who've already commented, re-visit the post. I've added the classic road rage cartoon of all time! I laugh every single time I see it...and I identify!

While attending art school, we lived in Hollywood. Whatta place - I've blogged a few stories about that time. Later we moved to Santa Monica and worked in Beverly Hills so we were fortunate to need only surface streets.

I had driven down from Oregon and planned to meet up with a friend in San Diego at a certain time. I forgot to factor in traffic in LA into my schedule. I hit LA traffic at 4pm on a weekday. I nearly ran out of gas on 101 south trying to get through it...

Wow, I don't believe no one mentioned the Goofy video. Awesome choice

I'm glad you were able to find the cartoon! That always makes me laugh, too! Happy TT!

Love the JT! I was "damn this traffic jam" in Dallas a couple of weeks ago... two hours on 635 from the Hillcrest exit to the Marsh Lane exit. Seems a porta-potty truck turned over... HazMat teams had to clean up the poop before we could move on... damn that traffic jam! LOL! Tyler traffic is really nothing to complain about in that light.

I dunno about LA traffic being the worst. In the course of his career my Dad drove in every major metropolitan area in the US on business, and he always swore that Boston was the worst city to drive in. Tangles, weaving, wandering, narrow streets following the patterns set in colonial times, no discernible one-way street system, multitudinous traffic circles (or roundabouts, or whatever you want to call them), a freeway system built for 1950s traffic and unable to accomodate greatly increased traffic levels later in the century... That was bad enough, but from the '80s to 2008 you also had to deal with the constantly-shifting detours and major disruptions of the Big Dig. Driving in and around Boston has always been a mojor disaster, and I'd pit it against LA for the title of the worst traffic any day.

The Disney movie is great! As a pedestrian, I know all about being up that lamppost with the cars snapping at my heels!

Haha I thought you meant Justin Timberlake! I think Sydney is a 'baby LA' frankly, that first shot looks like peak hour going over the bridge! I've learned a few sneaky 'back routes'on my way to work. They're not really quicker but at least I'm moving!

They still do that - give alternate routes during the traffic reports.

I do admit to avoiding the 405 at all costs!

Ha, in the late 60s, my cousin, who was trying out for the Dodgers had moved there and my dads first trip was spent driving in circles it seemed.

Went back when my sister and I took our kids to disneyland in the 80s...luckily we took a bus and stayed across the street. Going back to the airport sunday am, traffic was bumper to bumper.

Uh, way too much traffic and commuting, to be sure.

If you survived driving in L.A., you could probably drive anywhere. The traffic is a big problem, here, too, with all of the crazy Cajun drivers, who drive way too fast. Love the videos!

Love that Goofy video - it reminds me of my mother when she drove.

I want to listen to the James Taylor song, and I will, really, in a minute -- but I got sidetracked by the Eagles - Best of My Love. Ahhhh.