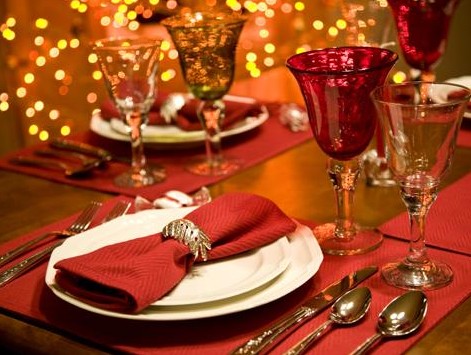 My Christmas dinner was in the planning stages at Thanksgiving.  It's always easier to think about the next holiday meal when I'm in the middle of a current one because my mind is full of food ideas, appetizers, desserts, side dishes, etc.  My husband has remarked, on more than one occasion, my family is the only family he knows who will talk about their next meal while eating the one in front of them.  I doubt it's true but it makes him happy to think so.

Not my Christmas table but...somebody's! (forgot to take photos ack!)
Christmas dinner was no exception.  My friend and her husband were in town for the holidays.  We wanted to share dinner with them and their eldest son who lives here.  She and I began planning a meal for the eight people we expected to serve:  my husband, two sons, my MIL, my GF, her husband and son.  I asked if her other son was joining us?

"No" she said.  "He doesn't want to have to "make plans'".  She rolled her eyes.
My table fits eight, I have a fine china service for eight, crystal  champagne goblets for eight and I ordered a standing rib roast with 3 ribs...perfect for eight.  I'd bought it on sale at Thanksgiving.  It was in the freezer.


A few days before Christmas, my younger son's girlfriend wanted to know what time we were eating so she could eat with us after her family's meal.  Huh?  This girl is barely 5' tall & very petite.  I told her five o'clock.  She didn't think she could make that.  Crisis averted.

Wednesday, my GF came to the office and said her mother was flying in from N.M. unexpectedly.  Was that all right?  Of course.  Now I had nine for sure, ten if my son's GF showed up.  I called the butcher.
"You'll need a bigger roast" he said.  "That rib roast won't serve ten or even nine."   He cut me a new 7 lb, boneless roast.  I left the other in the freezer.
The table was set for nine.  It was tight but manageable.  Yesterday, my son advised me his girl wouldn't make it and I relaxed.  The table looked awesome.  When our guests arrived, they brought food, wine, appetizers and two large boxes of Rocky Mountain Chocolate apples.  They own a franchise.  Their eldest had his young Golden Doodle along.  We expected that.  Next person through the door was their younger son.  Did not expect that!    He had either not been invited to dinner at his GFs' home or he'd changed his mind.  Either way, we were now ten.
I hadn't had a drink up to this point.


I scrambled to set another place at the table and let the menfolk figure out where the extra chairs, stools or bench could be found.  I served the food from my kitchen island and everyone squeezed in together.  One of the boys said "Grace" (literally) and the guys started eating before the women had finished serving.  Sound familiar?  The food was delicious, could have been hotter but it made it to the table and into their mouths without complaint.

I had several glasses of red wine.  I was grateful to sit down.  I was grateful we were able to fit around the table.  It was a motley crew of three generations; four, if you count the dogs.  It all worked out.
My advise to you is:  always make more food than you need on a holiday.  It will save you lots of grief.  Oh, and while eating our dinner Christmas night, I was already thinking about New Years.

Posted by California Girl at 4:49 PM

ha glad you were able to work it out through all the additions...i am sure it was lovely and also great to finally sit down...smiles...hope the new year treats you well...

Amazing how red wine can expand the table and settings... I am so glad it all worked out. People don't seem to realize that a drop-in can be very disconcerting to the hostess... but you did great!

I alway make way more than I need...mainly  because I love to eat leftovers for a few days after all of that preparation!  Your meal sounded delicious and fun!  A Rocky Mountain Chocolate franchise?  Oh my.  :)

Sounds like you had a great meal.  I'm never any good at getting everything done at the same time or at figuring out how many servings each dish will make.  I'm glad it all worked out for you. Happy New YEar!

Quite the adventure! Glad you made it through.  :)

LOL!  I can TOTALLY relate to this post, CG.  We had phone calls and texts adding folks on Christmas morning!  Love your rendition of the day!!  Great post!  blessings ~ tanna

This was the first time I recall NOT doing part of my dishes the same night.  The next morning...biggest mess I've seen in years.  I took half a day to clean up.

Holidays are always an adventure, one way or another.  At least we didn't have a Griswold Xmas or worse.

Better to have too much than too little!  Leftovers.  Yum.

Yes, the treats she brought from RMCF were just sinful:  decorative dipped apples, a variety of truffles, white chocolate covered pretzels, treats for the dogs (white chocolate on dog bones).  You just cannot stop eating it.

happy new year to you too.  is the book out yet?

LOL!  Sounds a little like ours, but our family has grown to 25+ so paper plates and "sit where you can" is the norm.  Hope you have a wonderful new year.

Sounds awesome and frankly, I love the random drop ins - necessity being the mother of invention, I've brought outside tables inside in the past. Somehow there's always enough to go around. Sounds wonderful. Hope you had a lovely Christmas and wishing you everything you desire for the new year.

I have always admired people who can make room at the table for a spontaneous guest - it seems to be the epitome of gracious hospitality.  No one cares if things aren't perfect, what matters is the spirit of food as a gift.  And good company.  The boys' tablemanners make me laugh - it's the same in my household.
All best wishes to you and yours for the New Year !

Hi Deborah!!!!  Happy New Year.  I hope you are doing well.  Are you in France or Canada now?  I'm guessing France.  It's too damn cold over here.

Hi Ldelegal!  Thanks for visiting and commenting. 25 people...I'd have to turn the living room into a dining room.   Happy New Year to you.

Helen Helen Helen,  miss you so much.  You celebrate New Years & Christmas in summer so you can bring the tables out or in, right?  I can just see everyone outside on the deck at 20 degrees.  Well, nobody would stay too long.

I'm in Belgium, actually!  Came here to spend Christmas with 2 of MFB's kids, although we've done a house swap and are ccomfortably on our own but within walking distance of the family. Back to France in a couple of days, where it will be a lot sunnier than here.  Just read your post recapping 2010 - nice to have that overview of your life.  I'm so glad things are going well.

Sounds lovely.  The travel we're now doing is not unlike what you do in Europe.  We drive to places we want to see.  There are so many wonderful places within a one or two day drive.  Flying is so unpleasant and unpredictable now.  It's much easier to drive.

Happy New Year.  I wish you the best.