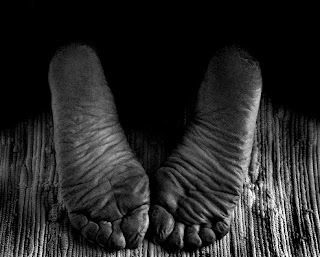 Wrinkles...everybody's got 'em; it depends to what degree.  How you feel about them is a different matter.
As a child of the Fifties and Sixties, I never thought I'd grow old.  Boomers have a Peter Pan complex.  It's an ongoing challenge to advertisers as they experiment with  marketing methods appealing to our vanity and sense of entitlement.  We should look young, feel young, act young.  And that's okay...up to a point.

Our parents raised us to believe we'd have a better life than they did during their Depression-era childhoods.  For the most part, we did;  as children, anyway.  I think we had, predominantly, decent upbringings in our respective suburbs, cities and rural areas.  Schools delivered better academic results in those decades;  expectations of manners, customs, rules and religious observances were more rigid.  I won't apologize for mythologizing my youth because it was so care free.  It is, perhaps, the reason we were surprised, angry and rebellious when our ideals proved to be so much fantasy, like the man behind the curtain in the Wizard of Oz.

Viet Nam is the key turning point for the Boomer generation.  It's the first deep wrinkle in our heretofore benign lives.  The involuntary draft; friends going to Viet Nam; some not returning.  Vets returning with shattered lives, shattered limbs, Post Traumatic Stress Disorder, and nobody to welcome them home.  Our country recognized the 40th anniversary of the shootings at Kent State in April this year.  It is not a pleasant memory.  It's still raw.  It still resonates.

I ask myself why I feel entitlement with respect to my body and face?  After all, I did nothing to deserve them but I did spend many years working to maintain what I had by playing racquetball, tennis, jogging, etc.  It was fairly easy and I thought it would last.  But it didn't.   I hit my late forties and my body began to suffer as I, in a characteristically Boomer way said, "My body began to betray me".  I had one hip replacement, then the other.  One knee needed replacing and I stopped playing tennis.  I became depressed and angry.  I drank too much.  I bloated.  My face began to sag and get some wrinkles.  I became even more angry.  You see, I had taken it all for granted.

I see this in my peers.  We have this silly sense of entitlement to things we enjoyed so effortlessly as kids, teenagers, young adults.   We think it's supposed to last but nothing lasts, as Frost said so eloquently in his poem, "Nothing Gold Can Stay."

My mother and grandmother believed in growing old gracefully.  I wasn't sure what that meant when I was younger but I have a sense of it now.  We need to like ourselves more, criticize less.  We need to feel good about getting up each day, rather like the little girl I posted on my other blog.  She has the answers and she's only four!  If you haven't see it, you should.  I have nothing against plastic surgery and, if I had a lot of money I might very well have my chin lifted.  But, that isn't going to happen so I'd better get comfortable with this face.

Will Rogers had some pithy comments on aging:

Posted by California Girl at 2:05 PM

This sure gave me a lot to think about...not that I wasn't thinking about it already. It ended on such a nice note- the Will Rogers quotes. Now I feel much better...Really!

some great closing quotes there...i want to grow old gracefully as well...i would rather travel the roads with wrinkles than be stuck at home anyday....

A very wise and beautiful post. I love that last quote. I don't think I've heard that one before. It says so much in such a few words. Great TT post.

Yes definintely an attitude of entitlement ensues in the 'west' although have you noticed how no matter their trials and tribulations, the Asian complexion ages well by western standards? Hard work and a hard life for some seems to actually preserve youth. I don't think I'm capable of 'growing old' gracefully but I'll try. And frankly,after being widowed very young, I consider every day over 35 a treasure, wrinkles not withstanding.

The Peter Pan complex...now isn't THAT the truth!

Very thought provoking post! I think that I still have the Peter Pan complex! :) Cheers to a happy weekend, cher!

It's a cold, hard reality when you wake up one day and face...

Thanks for the reality of wrinkles

Yes it is important to learn to grow old gracefully because it sure does beat not growing old at all. Everyday is a great day and everyday we grow older is an even greater day.

Sometimes I think of all the people who died at a younger age then I am and I know that they would have loved to have made it to my age, even with all of my warts, wrinkles, farts, burps, CRS problems, and all the other things wrong with me. But then sometimes I worry about how they have that saying that "Only the good die young!" So does that mean that I am bad, and then I know that I am Bad, Bad to the Bone, which I think means good. Must be suffering from that CRS thing again. Plus I do have the Baby Boomer attitute in that I am still pretty young and won't be old until I am in my hundreds.

I am still a hot beautiful babe, well at least in my mind, and as long as I do not look in a mirror, then I can keep thinking that.

I'm a pre-boomer (born in 1941) so I guess I'm just happy to still be alive, able to move around, love my partner, and feed the birds. Thoughtful post. I didn't know about your hips and knees, that's a lot to take into account. Blessings to you.

Growing old gracefully...that's a phrase I haven't thought about for a while and one I especially like. I am now pondering exactly what it means, and I am going to interpret it as meaning to appreciate the present by accepting the graying hair/wrinkles and by being glad I am still here...healthy, happy and choosing to be botox and plastic surgery free.

Everyone: no matter what I say, I'm going to keep coloring my hair! at least until it looks so phoney nobody will be fooled. :)

Thank you for a lot of things here. I saw the video of the little girl the day you posted it and shared it with several friends and family. The power of appreciation and gratitude, wow.

I relate to everything you wrote, except my jury is still out on the plastic surgery thing. I do think if a characteristic is distracting to a person's sense of self esteem, and they have the means, they should do what they want. I guess it just really bugs me that the beauty industry has been so successful at convincing us of what they think beauty is.

When I was in NY, I really felt my age, maybe for the first time like that. I wasn't as old as the ladies in the museums who were meeting up for their weekly outing. And I wasn't as young as the pretties on 5th Avenue in their killer high heeled ankle boots-sandals. I got worn out from just a few hours of walking and didn't spring back the next day, or the next, or the next. I tripped and fell on the sidewalk and wondered how long it would be before I might break something, like an old person, in a fall like that.

My mom was wonderful about aging too. It's now that we need that modeling, and we are so lucky.

Will Rogers is a genius.

This was poignant as all hell from beginning to end.

Really wise and thoughtful post. It bears re-reading.
I'm trying to grow old gracefully - embracing the wrinkles and the grey hair is not a problem - but gravity seems to have got so much more powerful around these parts. Everything is heading south and that's not so much fun.

A nice thought provoking post. I guess I am growing old very gracefully. I had some ladies a couple of weeks ago thinking I'm nearly twenty years younger than I actually am.

I'm so very late!!!
I so much enjoyed this post. There is a resonance here. Summing up our generation makes it sound more important than I've been seeing it these days. I think a hit of nostalgia and sentiment is good for me. thanks. -J

please visit to get Shakira back...
many thanks!

My face held up pretty well for a long time and now it just seems to be getting saggier. I know all about that drying up and leaking bit!

Great post, CG. I'm working on the "gracefully" thing. I'd have to admit, I'm still stuck in the anger at feeling betrayed by my body. Dammit! I hate to confess a sense of entitlement... but, I think you may have hit the nail on the head. To growing older gracefully... cheers.