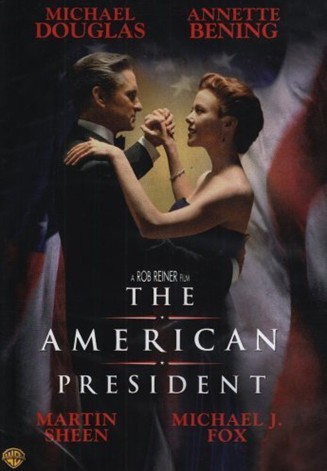 Sixteen years after its release, "The American President" is still topical.  If it were released today,  it would be reflective of our current political landscape.

As a story, this has it all:  a well paced plot, a problematic love affair, dirty politics, ethical dilemmas, altruism vs practicality, etc.  Written by Aaron Sorkin who went on to adapt this as the great television series, "The West Wing", the movie has legs...good lookin' ones too!

There are so many "moments" that resonate.  Here are two of the best.
Scene set-up:  In order to placate his Right Wing opponents, hopefull improve his favorability ratings and smooth the way to re-election, the President decides to sacrifice an environmental bill his lobbyist girlfriend, Sydney Wade, has diligently worked to pass.  This decision comes after a lambasting from his political adviser played by Michael J. Fox.


Who is right?  I don't know but the dialog is great.  Somebody should have run and re-run this movie for the Obama Admin last year when they were taking the "high road" as it were.

Sydney learns of the renege on the part of her boyfriend, the President.  She breaks off their affair very succinctly.


"Mr. President, you have bigger things to worry about than losing me.  You just lost my vote."

Scene Set-up:  The Prez delivers the speech we've all waited for; the speech his administrative advisors have begged him to unleash.


Perhaps someone will suggest to the inner circle at 1600 Pennsylvania Avenue this film may be streamed any night on Netflix.

Posted by California Girl at 3:12 PM

I love Aaron Sorkin's writing, mainly due to my sister's fascination with The West Wing. She's shared several episodes with me. I've never seen this movie, though, and I plan to watch it ASAP. I didn't watch the second video because I was afraid of spoilers, so you just caused a case of "bloggus interruptus." Hope you're happy! ;-)

this really is a great movie...it came on TV not too long ago...it touches on several great things...

Foxy: you were right not to view the 2nd video. If you liked "The West Wing" (my all time fave tv show) you'll like the movie as it was the nucleus of the Aaron Sorkin dynasty.

Brian: You are so right and that is it's secret.

I love Aaron Sorkin and West Wing is also my all time favorite TV show. I would have voted for Bartlett...I want a president like Jed Bartlett. I thought the movie was cute, but the West Wing is great. The intelligent dialog, the moral dilemas, the dedication...damm that was a good show!

Hi! C.G.,
I just recently, watched this film along with Douglas/Paltrow in "A Perfect Murder" which was part Of a group Of Douglas/Paltrow films that I received for Christmas.
Thanks, for sharing!
The videos too!
DeeDee ;-D

West Wing is one of my all time favorites, too. The quick, dynamic and wit-filled exchanges between characters was so very stimulating. I don't believe we have had any other series come close. I miss Toby, Josh and CJ. Of course, you know I loved Ainsley, too. ;)

Thought the movie was good, too... but, not WW.

#1: how often did I think along the same lines, "how wonderful it would be to have a president like Jed Bartlett."

DeeDee: You're welcome. I just happened to watch the movie the other night for the umpteenth time and was struck by how timeless are the messages contained within.

Tanna: I keep searching for another show like this. Nuthin'. I learned something from this show and I cried alot. I found it idealistic but beautifully so. Martin Sheen actually came to our area to stump for Howard Dean in 2000 (or was it 2004?) and I went to see him speak. He's an ardent political activist and it was fun to see him. He came off much as his character. He's a well spoken, well-educated man.

I loved this movie! I also saw it not too long ago, it is very relevant to what goes on today. Add to that the fact that Annette Bening is in it (whom I love!) and it's very high on my list!
Great post! have a great week!