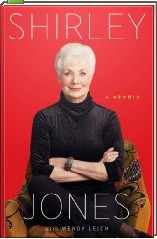 In an autobiography that should have been titled "Jack Cassidy  My Sick Passion". three quarters of this book is about her first husband, his womanizing, his bi-sexuality, his indifference to his four sons, his substance abuse.  And she can't get enough of the guy while she recounts his cruelty, egomania, jealousy of her success and his big dong.

You heard that right.  The guy was well-endowed with a capital "D".

Shirley Jones proceeds to destroy any and all ideals we may have about her...and not in a good way.

My MIL bought the book, read it and gave to me.  As a long time lover of musicals, my favorite being "The Music Man", I thought I'd be reading about Robert Preston, Gordon MacRae, Burt Lancaster, her co-star in "Elmer Gantry" and her Hollywood experiences.  If those are your interests, don't bother to buy the book.  They are all footnotes.

Instead, we get blow-by-blow descriptions of her sex life with Jack and his with others.  No spoilers here.  You'll get an eyeful if you read reviews.  What she does is her business, but some things are not meant to be shared.  She leaves a legacy of embarrassment to her sons and grandchildren.

Suffice to say, I would have subtitled the book:

"If you want to be disappointed, read this."

Posted by California Girl at 10:12 AM

What a shame. I loved her in The Music Man and Oklahoma.

Dong. Such a silly sounding word but I think it's faded from use.

Not from Shirley's lingo

Had it been well written...? Nah, I'd still be grossed out.

Some bios are excellent. Burt Lancaster has one that is beautifully written and entertaining. I love Hollywood bios & history. I just try to steer clear of the sordid. In this case, I had no clue.

Thanks for the honest review, Cali. I will definitely skip it! :-)

For God's sake the woman is 79 years old, she must need the money to expose what a cad that Jack Cassidy was! They had kids together for God's sake & they are alive and they have kids, what a terrible memoir to have penned, does she think that others want to know about only her SEX LIFE???? Why can't people who were great as actors and actresses keep their big mouths shut? really no one give a tinker damn about it but to write it for your kids and grandkids to squirm over is just tasteless...Count me out over ever reading anything like that..Gone are the days when Ladies act with any class, give me Jackie O and Sophie Loren, they would have never written such rubbish!!!!!!!!!!!!!!!

I did not get the feeling she needs the money but she might be more discreet about THAT. I'd rather she slept w/ Burt & disclosed a romance than the silly crap she made public.