Great screen kisses came immediately to mind when I read this week's thematic subject: kiss. Too many to include so I'll just cover some of my all time faves. 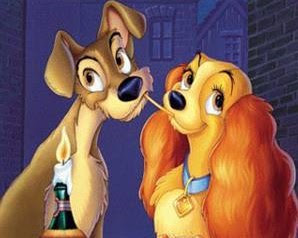 The sweetest most adorable kiss ever was in "Lady and the Tramp". 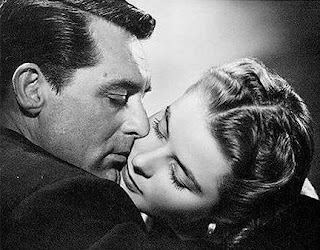 The longest movie kiss ever filmed (probably up to that time) is between Ingrid Bergman and Cary Grant in "Notorious". Roger Ebert wrote, "The production code forbade a kiss lasting longer than three seconds, and so Bergman and Grant alternate kissing with dialogue and eye play, while never leaving one another's arms. The sequence begins on a balcony overlooking Rio, encompasses a telephone call and a discussion of the dinner menu, and ends with a parting at the apartment door, taking three minutes in all. The three-second rule led to a better scene; an actual 180-second kiss might look like an exercise in slobbering."

All I know is, I'd like to have spent two minutes in Cary Grant's arms.

Then the iconic scene "From Here to Eternity". It's still hot. 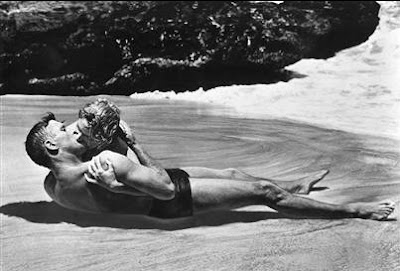 One of the great movie endings is the New Year's Eve scene from "When Harry Met Sally"; memorable lines and a memorable kiss. 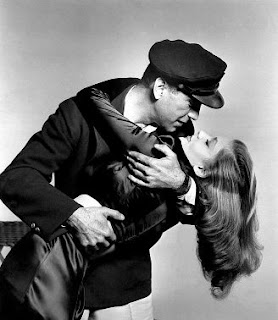 Watching two people fall in love on screen is electric. "To Have and Have Not" gives it up in spades. Whew! Lauren Bacall was one gorgeous dame.

Steve: What did you do that for?

Slim: It's even better when you help.

Now, this is not the scene I wanted from "Gone With the Wind". That scene comes at the end of the first part of the movie after Rhett has helped Scarlett, Melanie, her newborn baby and Prissie escape the burning of Atlanta. He leaves them on the crest of a hill overlooking Tara as he explains he's joined the war effort on the side of Confederates and he asks her to kiss him as a soldier going off to war. She complies momentarily then pushes him away. That was probably the scene over which most women swooned back in the day.

I'll settle, instead, for a funny scene from "GWTW" below when Rhett doesn't kiss her. . .

Oh Rhett!
Posted by California Girl at 7:21 AM

What, no Luke and Leia sibling make-out in order to make Han jealous?

Awesome selection, especially Bacall's lines. How long has that one been stuck in my head?-LOL!

Just pucker up and blow!

I love that Notorious kiss, too. Steamy. And WOW! that pic of Bogey and Bacall is just fabulous!!!

Lady and the Tramp was the first love story I fell in love with as a girl and I still think it's one of the greatest. I keep hoping for a tramp to come along but so far I've had no luck. Maybe I should just rescue a puppy.

i am glad Lady and the Tramp made the list...too cute. Love when harry met sally too...need to go watch that again...

You've got me thinking about incredible movie kisses now--how 'bout Al Pacino giving Fredo the Kiss of Death in Godfather 2 (I think)--pretty potent stuff there!

And my husband and I were just discussing the ick factor of that Luke and Leia kiss.

p.s. let me not forget the kiss at the end of "Sixteen Candles," swooooon.

Good choices, all! What bonehead sat down and determined that no kiss should be longer than 3 seconds on film?

The scene: Slim (Lauren Bacall) kisses Steve (Humphrey Bogart): I am not familiar with this one, but their dialogue is funny.

watching dogs kiss in cartoons is cute, but it looks slobbery in real life. lol!

Hi! C.G.,
Great selections!...especially, the ones of Humphrey Bogart and his baby. I also like the photograph of Grant and Bergman.(and their films, but of course!)
Thanks, for sharing!
California Girl, I have provided the link that you were looking for on your other blog.
Take care!
DeeDee ;-D
booksandacupofcoffee

Great collection! And the Bacall lines from To Have and Have Not are classic. She may not have written them, but she's the only one who could have said them!

Had not seen that photo of Bacall and that other guy... great choices, thanks! -Jayne

Of course Casablanca comes to my mind, one of my all time favorites! I also liked the more contemporary, "Say Anything" with John Cusack!

Love the Bacall quotes. I think they also worked so well knowing they had an off screen relationship. It used to be a rule that couples couldn't share a double bed on screen either! Great choices (except Meg Ryan)

I just happened to see a kiss today - from Eurotrip. It was quite a long and passionate one until they found out they were kissing their twin brother/sister. I don't really know how it happened, but clearly not intentionally. Not one of the kisses you would put on your list, I guess :)

What, no Colin Firth?

What about Tom Hanks' anaemic kisses in Philadelphia?

Great choices there! What about "The Princess Bride"?

Rememeber the line: “Since the invention of the kiss, there have only been five kisses that were rated the most passionate, the most pure. This one left them all behind.”

I totally left another comment somewhere today that said "Oh, Rhett." I wish I could remember where it was!

Willow: Yes, Grant & Bergman were steamy. I've been asked why not Bogey & Bergman in Casablanca but I like these two chhoices w/ each of them in another's arms more. I wanted to use "As Time Goes By" as the music back but did not know how to embed to play when clicking on the link.

IQ: I know. So darn sweet. Puppies are good!

Brian: Lady & Tramp, a childhood movie of mine. Have your children seen it? When Harry Met Sally never gets old. It's timeless.

Leah: I thought about the crime and gay angles but decided to stick with conventional romance between famous film couples (incl Lady & Tramp) Yeah, Luke & Leia, ugh. I must have blocked that out.
Coincidence you brought up "16 Candles" and John Hughes passed yesterday.

VE: Hollywood, land of pervs, fruits, nuts and dumb asses. I can say that because I'm California Girl, born and raised.

Debo: I love it when she says "It's even better when you help". Wish I'd said that to some of the clowns I dated.

Books: Thank you. I visited my other link last night and still couldn't find it. If you see this, refresh my memory as to what I was commenting on or asking about.

Roy: Probably true. I can't think of another dame who'd deliver them with her sly feline approach and throaty voice.

JA: You're teasing me, right?

otin: I've never seen that, I think. However, I loved the movie he made with Kate Beckinsale where they searched for one another for 10 years after she wrote her phone number into a book he wanted and left it with a book seller and told him if they were destined to meet again or him to find it, he would. Cannot think of the name of that but what a romantic film.

Baino: You don't like Meg Ryan? You're the first person I've heard say that. Not that you aren't entitled to not like her. She's just always so perky, bubbly, innocuous...back then anyway.

Minka: Is Eurotrip a movie? Sounds weird. Very weird...like Angelina & her bro tonguing yrs ago inf ront of a camera at an awards show. I believed they did it for shock value but it was still a creep out.

Cinnamon: I'm out of the demo for Colin Firth. Sorry. As for Mr. Lancaster, I met him when I was about 20. He was the best friend of my best friends' father, a producer. He came to the door of their home, I answered it, and in walked this old guy in overalls asking for "rollo". Took me a minute to know it was he. You could have knocked me over. I then saw him at Pepperdine Malibu, where I attended college, running track. I spoke to him and he was quite nice. He looked better in track shorts than overalls. He was still old tho'. hahahaha!

Kris: Nawwww. I answered that one in my reply to Leah.

Wings: Another great one I missed! I'm especially piqued for missing the great scene in Bull Durham" between Costner & Sarandon, w/ dopey Tim Robbins in the middle wondering what's going on. You can see that on: http://megancahalan.blogspot.com/

Megan: See response above and the one I left on your TT post!

Gone With the Wind
is my All-Time Fave!!

Have a Bright, Bold, and Beautiful
Weekend ~~

Cal. Girl- Fantastic post! I love the way you wrapped the story around the videos. Great videos, by the way. Have a sunny weekend! Cheers!

Laura: "GWTW" is still my all time favorite as well. Looking forward to another great LT original.

Marguerite: Oh, you're so sweet. Thank you. It's sunny today (Sat) sketchy tommorrow. We may drive to Portland, ME tomorrow to see "Julie Julia" on a large screen.

Imagine A World Where You Could Only Kiss For 3 Seconds!
verification ="hotpoto"

What great kissing moments! Thanks for the memories.

Great selecton of kisses! When Harry met Sally has to be one of my favorites, it's honest and beautiful. Just right :-)

'Notorious' is one of my all-time favorites! I watch it whenever I see it in the listings.

'French Kiss' is my favorite Meg Ryan movie. When she's asleep on the train and she rolls over and kisses Kevin Kline thinking he is "Charlie" and "Luc" instantly falls in love with her.....ahhhhh! I think I've watched all or a part of that movie a hundred times!