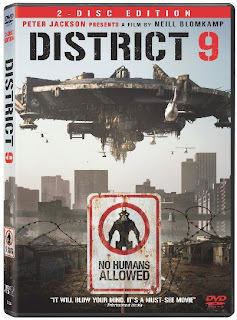 Until the Academy Awards this year, I had never heard of the movie, "District 9". I was downloading movies of interest to our Netflix account when the film came up for its first award.  I added it to the list.

My husband and I viewed the movie this weekend and it literally took my breath away.  It is not what it seems; not overblown science fiction, not a cheap thriller or creature feature. This story has depth, emotion, pathos, moral choices, political content. It's about discrimination, racism, isolation, persecution, genocide, torture. It's a futurist morality play that echoes our mutual pasts.  Boy, is that scary. 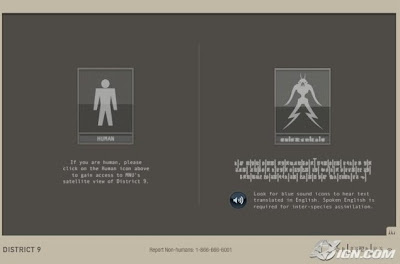 What does this have to do with signs, you ask? The dvd opens with a sign of side by side images, one that looks like a men's bathroom logo, the other bug-like and unexplained.  Unlike the video game screen shot above,  there is no writing on the movie screen shot to tell you what to do or why you are staring at these images.  We eventually tried highlighting one and found ourselves on PLAY". 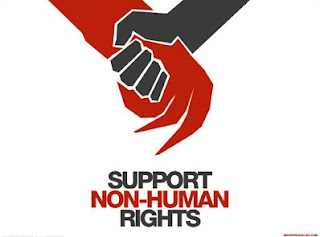 The importance of the signs is made clear a bit later.  Without destroying the movie for you, let's just say it's a must see for anyone with a thinking mind.  It isn't pleasant and there is no fairy tale ending.  The director manipulates the audience with skill, shifting emotions back and forth between characters.  No clear hero or anti hero although at times they come close. 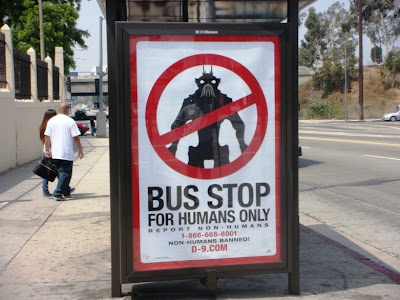 Some of the signs used in the movie were also used as a means of advertising in certain cities.  The signs apparently went viral.  More importantly, it's what they reveal about the content. 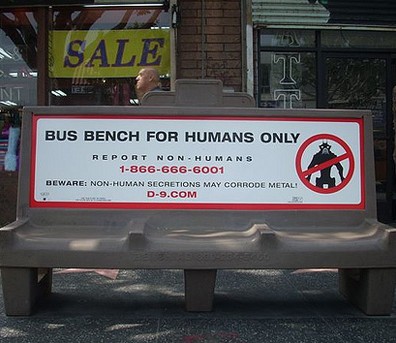 Oh, I have to see this movie now! I love sci-fi anyway, and you have made me want to see it. I'll put it on my Netflix right away. Thanks!!!

wicked cool movie...i was pleasnatly surprised...and a sign of things to come?

I'm adding it now! I shy away from sci fi...don't like far out movies...this one sounds interesting....thanks for sharing!

Hum....Not my sort of movie but this does look thought-provoking.

Very interesting...I'll consider it next time we have movie night!

We are a scary species.

Deb, I had heard good things about the movie but then it kind of slipped off my radar. After your review, I'll definitely rent it.

NOTE TO ALL: This movie is not for the faint of heart and DEFINITELY not for children.

I watched this movie a while ago. The fact that it takes place in Johannesburg (and was filmed there) says a lot about the intended message of the movie. How the aliens in the movie were treated exactly mirrors how blacks were treated under apartheid. This is very much a "lest we forget" movie.

Thanks for the heads up, I'll put in on the queue... and watch after the kids go to bed. -J

I will watch this - but I'm waiting until I'm housesitting for one of my siblings. They all have those monstrous wonderful flat screens!

The signs intrigue. Yet to see it.

Loved the film, very satisfying to watch. I saw it when it first came out and it has really stayed with me. What I find remarkable about it in particular is that for all the giant robots and explosions and action there was something so quiet about it.

Cali it's a great movie and interesting that it's a South African effort. I was in Capetown during the apartheid years and these signs are all too familiar only replace 'aliens' with 'blacks'

I am a Netflix addict and rented this movie a couple of months ago. Like you, I was completely blown away. My favorite movie & book genre happens to be Science Fiction, and before watching it, I expected it to be the typical (yet interesting), exaggerated sci-fi story about alien invasion. I was pleasantly surprised to discover that District 9 was nothing like that.

Very thought provoking. And the ending definitely left itself wide open for a sequel. I hope they explore that in the future. I would like to see a fairy tale ending.

Thanks for sharing your thoughts on it! Great movie! We should start tossing movie suggestions each other's way! :-)

Roy, Art, Baino & Rohzi: appreciate all your comments. The apartheid thread became so much larger, didn't it? I thought of all the nations who've instigated this type of behaviour against others. The Americans did it to the Indians, the slaves, the Japanese Americans during WWII, the African Americans up until recently and so on. We are not blameless.

Hi! California Girl,
I must seek this film out too...because of your very
"intriguing" review of this film.

That advertisement on the bus stop bench is kind of...scary.

By the way, Cole Scott's photograph remind me of one of artist Georgia O'Keeffe's painting.

Thanks, for stopping by and sharing too!
DeeDee ;-D

great take on the theme

yeah, yeah, i'm terribly behind....just wrapped up a week+ literally at the movies!!

i thought district 9 was brilliant