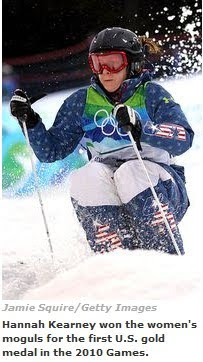 It's a party four years in the making for 23-year-old Hannah Kearney from New Hampshire, who slashed through the rain and down the moguls Saturday night -- a remarkable run that gave America its first gold medal of these Olympics and denied Jenn Heil the honor of becoming the first Canadian to win gold on home turf.  espn.go.com 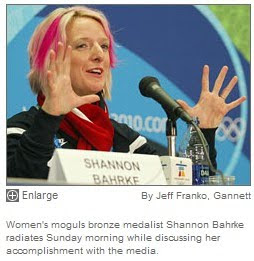 Bahrke Wins Bronze in Freestyle Skiing
Her bronze will join the silver medal she won at Salt Lake City in 2002, not to mention two world championship medals and an overall World Cup title.
"To come back to my third Olympic Games and bring home my second Olympic medal is just, like, I can't really fathom it," Bahrke said. "Hannah talks about when it will sink in. For me, having the Olympic silver medal from '02 hasn't really sunk in. I look at it and I'm like, holy smokes, that's mine, that's so cool! And now I have another one to put next to it."
Bahrke, 29, has said she will finish the World Cup season and retire from competitive skiing. Her performance Saturday and throughout this season suggests she's leaving with plenty left.
"I'm going to be really sad to let it go, but what a way to let it go,"   usatoday.com

Jump off a hill in the morning, do some cross-country skiing in the afternoon. That's what goes into the Nordic combined, a sport that's been part of the Winter Olympics since 1924.  And on Sunday, an American finally won a medal.

Johnny Spillane snagged the silver and Todd Lodwick narrowly missed joining him on the podium, finishing fourth. Spillane nearly got the gold, finishing a mere four-tenths of a second behind Jason Lamy Chappuis, who was born in Missoula, Mont., but has always raced for France.  by Jamie Aron AP Sports 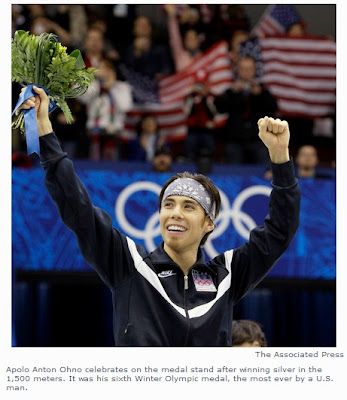 That's when an ending straight out of a Hollywood screening room spliced into the action. The second two Koreans tangled skates and careened into the wall on the last turn. Ohno glided to a record-setting silver medal and American J.R. Celski – a 19-year-old who grew up idolizing Ohno – won the bronze.

Ohno's second-place finish behind Korea's Lee Jung-Su gave the 27-year-old Seattle native six medals over three Winter Olympics, the most ever won by an American man.  from The Oregonian    oregonlive.com 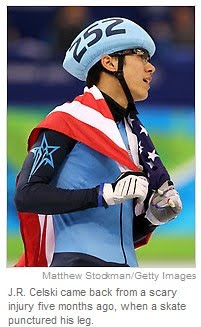 Back in September at the Olympic Trials, Celski crashed, leaving him with a huge gash in his leg that went all the way to the bone after the tip of his skate got lodged in his leg. The road to recovery has not been an easy one for Celski, but was undoubtedly worth it after fulfilling a lifelong dream of winning an Olympic medal.  by Marissa Poulson   Scottsdale TV Examiner

VANCOUVER, B.C. — The day after J. R. Celski secured the bronze medal in short track speedskating’s 1,500-meter race, he met with reporters at the media center here and admitted that five months ago, when he removed his left skate from his right knee at U.S. Nationals, he wondered if he would die.

Celski said he came one inch from cutting a major artery in his leg, the result of which, well, he did not want to think about. He cried that night but never lost consciousness, as blood pooled on the ice.  by Greg Bishop nytimes.com 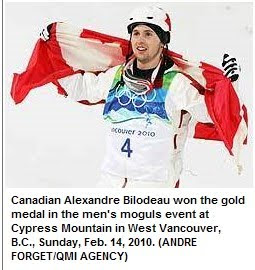 Alexandre Bilodeau is Canada's golden boy.
The 22-year-old Montreal native made history Sunday night, winning the men's moguls to become the first-ever Canadian athlete to earn a gold medal in an Olympic Games on home soil.
After finishing 11th in Turin four years ago, Bilodeau bounced defending Olympic champion Dale Begg-Smith — a Canadian ex-patriate who competes for Australia — to strike gold Sunday and send waves of relief across Canada.
No Canadian won a gold in either of the previous Olympics held here, 1976 in Montreal and 1988 in Calgary.
Bilodeau's gold was Canada's second of the day Sunday and third overall in the Vancouver 2010 Games.  torontosun.com

US Takes Bronze in Men's Freestyle

Bilodeau posted a score of 26.75 to edge Australia’s Dale Begg-Smith by 0.17. Wilson was a half-point behind Begg-Smith with a 26.08, powered by the highest air score (5.46) among the 20 finalists.  skiing.teamusa.org

Posted by California Girl at 8:22 PM

nice. thanks for the recap...been catching some of the video on nbc but it is mostly old...

Thank you! I wanted to watch Apollo Ohno skate Saturday night, but I couldn't stay awake for the final and forgot to check the newspaper yesterday. We watched a little of the pairs figure skating last evening with GD Lauren. She was fascinated, especially with the costumes! She's almost 4. :)

The Olympics have been so exciting! After getting off to a somber start, things are looking up. I thought of you when New Hamphsire's Hannah went gold!! Her little pigtails flying! How cool was that? Can't wait to watch Ohno again! This stuff keeps you on the edge of your seat with sweaty palms and a racing heart... do you think we burn any extra calories? LOL! ~Tanna

It has been exciting. I loved the moguls and Apollo.

It was so tragic about that luge rider. It kind of put a damper on the whole thing for me.

On the more serious side, I'm glad to see the best win,be it an American, a Slovene or any one - so much work and effort has been put in their achievements you cannot but respect that!