The first night of our recent trip, we drove to the beautiful city of Portsmouth, N.H. staying at a restored 19th century hotel, Wentworth by the Sea.  As with all great hotels, it has substantial history.   In 1905, the Hotel Wentworth as it was then called, housed the delegations from Russia and Japan to conclude an end to the Russo-Japanese War known as the Treaty of Portsmouth.   Before and after that, it was a summer retreat for the well-to-do. 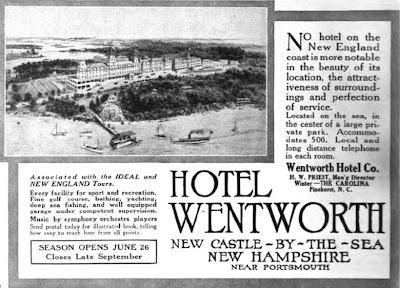 Advertisement Scribner's Magazine 1915
The hotel closed in 1982, fell into disrepair, was rescued from demolition in 1997, renovated and reopened in 2003. It is so lovely, even in Winter, you have a sense of what it must have been like in days gone by. It's also one of the grand old wooden ladies, i.e. wood structures, from the Gilded Age. There are three in New Hampshire, the Wentworth in New Castle, the Mt. Washington Hotel at Bretton Woods and the Mountain View Grand in Whitefield. 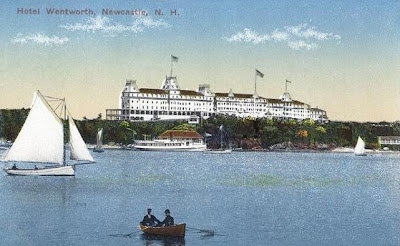 1906 post card of the Hotel Wentworth
We had a lovely room with a view of the lagoon.  The hotel sits on a spit of land, up on a hill, with a view of the ocean to one side and an inlet lagoon on the other.   There is a marina on the bay side, still tying up boats after more than a hundred years.  The golf course too is vintage, opened in 1897 and enlarged by Donald Ross in 1921.

After the Wentworth, we made our way up the Maine coast into Camden.  One of the first sites we stopped for was a beautiful point out on the water, overlooking Penobscot Bay. 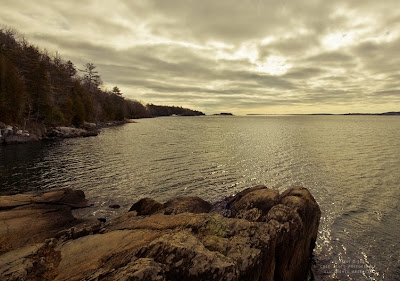 On a point between Camden and Rockland overlooking Penobscot Bay
Posted by California Girl at 9:38 PM

Looks like from an old movie... and your photos - as always - are great.

That is one gorgeous place! I'll have to remember it the next time we travel to New England. Lovely seascape, too.

Sounds like you had a bon' ton', cher! Beautiful!!

More more . . this is the area I want to see on my 'BIG' trip. I have so many friends on the East coast and every photo whets my appetite. We have a Portsmouth and a Camden . . I think we colonials were particularly lazy at naming the places we invaded!

our town just lost the ol' Yankee Drummer hotel to the wrecking crews. While not nearly the granduer of the Wentworth, it did well in its day...

And just have to sigh at the bay shot here...tranquil...