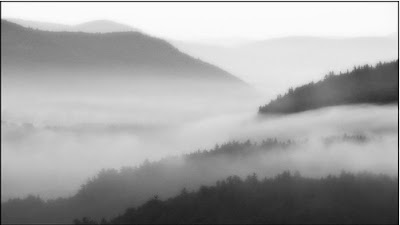 We had dinner with friends last night.  They are our closest friends in N.H. and we are at opposite ends of the political spectrum which  is often a topic of discussion among us.  We don't avoid politics but we don't necessarily seek to discuss them.  However, the topic of the current administration arose last night before dinner.  My friend's husband asked me

"What do you think of the current administration now?"  His tone betrayed his irritation.

"I don't think there's been enough time to tell yet."

I  listened to him denounce the bank bailout, the economy, proposed health care reform and the other usual suspects.  I politely disagreed citing facts such as Bush setting up the TARP program, the economy tanking two years ago (the recession officially began in '07) and so on.  I threw in the repeal of Glass Steagall Act under Clinton, the implementation of NAFTA, deregulation under Reagan and Bushes I and II.  I referenced facts I'd researched for my blog Women of A Certain Age and the post I'd written on this topic.

While I was pleased to have these tidbits at my fingertips, I knew they'd make no difference in his thinking just as his opinions make no difference to mine.  He eventually did say he feels that all politicians are just that:  politicians.  He is losing faith in the system.  He sounded despairing of significant changes for the better.

My husband is feeling much the same way about one of our congressional representatives, Carol Shea Porter, because she has approved stimulus spending on road projects in our area that epitomize wasteful government spending.

In thinking over the conversation this morning, I realize how polarized we have become and why it interferes with the necessary decision-making required to make changes the country so desperately needs.   Ongoing discussion and a willingness to listen are critical to overcoming bipartisanship.  If the politicians are indeed nothing more than that, it's up to us, their constituents, to demand more from them, to make them accountable.  We cannot do that by "dropping out" but by "tuning in" to "what's goin' on", that is, if we really care.
Posted by California Girl at 5:34 PM

Here is how I see it: Government is a giant machine and the people who we elect are just tiny little parts in the way it goes. Putting a new president in is like putting new parts in a car. The car still runs, almost the same as it ever did. There may be a knock or ping here or there, but the car will keep running with very little change to the average person. People have their opinions and no amount of discussion is going to change someone elses view. I think it is good to stay away from politics or religion unless you are in the mood for a fight!

Somehow - perhaps through too much violence, too much strife and an ever quickening social and cultural makeover - discontentment has been gather momentum since the 1960s.

It's too simple to stereotype but it does seem the rightwing and conservative Christian camps want "things as they once were (or imagined)."

Progressives seem uncertain of the goals that were once cherished.

Adding to the confusion is an ever expanding population, complete with troubles and woes unseen a few decades ago.

Then there's government, pouring about 50% of the Federal budget into a military complex that Eisenhower warned us to control.

Facts reveal a new power, with the muscle to get their way - that in some ways is more powerful than our government - the development of large corporations.

Our schools are broken and so too are much of the infrastructure we once thought was near perfect.

Against that backdrop (and many other issues) discontent is spreading - discourse is mostly that of frustration while people choose sides based on irrational reasons, distorted media info, myths and talk radio hyperbole.

I just don't know if we can rally around a common theme at this date.

I think I'll feel a whole lot better once health care/health insurance reform is passed, as long as it has some sort of public option available. If that doesn't happen, I'm going to be sorely distressed. Otherwise, I agree, it's a bit too early to pass judgment.

"wasteful government spending", 'bout sums it all up. And NAFTA is a joke. What ever happened to "by the people, for the people"? Or should that be "buy" the people? It's high time we shed the wool from our eyes...

Being open to discussion and compromise is as difficult in politics as it can be in marriage, but with less hope of satisfaction at the outcome. You're absolutely right that it is the only way to work together but it takes a lot of commitment and a genuine desire to move away from the past. The world has such hope for the United States and we continue to watch and listen with interest.

Cali you make so much sense. Of course we're all 'set in our ways' and most of us have pretty definite political opinions but the world is changing. The old idea of voting the way your father did is no longer. We're a global community and this polarisation is so destructive. It stops each side from at least contemplating the voice of the other. I have the Libran curse . . no nothing to do with sanitary items . . I see the side of both arguments so clearly. The problem is resistance to change. Change is painful and some are more resilient than others but the time for change is now. Never more so than since the 60's. I hope there are many dinner debates around all our tables and that a little of each of us rubbs off on the other. Does that make sense? I'm beginning to think I know more about US politics than here at home! Cheers :)

Yep, this sounds just like my brother and me...we are polar opposites. He used to send me all kinds of crap emails until I started matching him one for one.

I have no idea what he thinks of our President, but I can make a wild guess that his opinion has a lot to do with race, since he is also a bigot. This little tidbit also might give you a clue as to how he feels: he flew his ten-foot high American flag at half staff for 8 years while Clinton was in office, and he has a framed picture of Ronald Reagan over his desk.

I guess you can see why we don't discuss politics when I see him.

Despite all this I still love him and he is a good man. He just has wrong ideas.

you make great points. tuning out is scary because we lose our voice and still have to live with the repercussions. it can be disparaging at times, looking at the mess. sometimes we just have to start with one piece before we move on to the next. it takes many hands though and we can not afford to lose them to apathy.

Otin: that's a good analogy but I keep hoping someone will design a Prius model and change the paradigm.

Bill: I'm now going to go slit my wrists. I bet our parents had similar thoughts about discontent in the Sixties. Gotta keep the conversation going.

Pop: I saw a crawl during a moring news program that says the U.S. will pay out more in SSI than it takes in over the next two yrs. (SSI is Soc Security)

Subby: wasteful government spending is ongoing and the only people who can and should demand accountability is US.

Deborah: marriage vs politics, both are tricky. this is another good analogy.

Baino: well, perhaps we should start focusing on your country for a bit. I'd like to hear more about your health care system.

Susan: your brother sounds like my dad. Signed framed photo of Reagan when the Prez, hard right literature everywhere. We had some knockdown fights, I can tell you. Dad would watch the "liberal" news sources as well as the right wingers. He had a very quick mind but was rooted sometimes in a lost agrarian concept. I respected him even when I didn't agree (which was 90%).

Brian: despite the old "turnon, tune out" adage, I think alot of Sixties folk stepped up their awareness of govt. Nothing was ever again the same for us Boomers.

California Girl, oofah that's a tall order! There's so many pieces to the puzzle....

I'm not for slitting my wrists ... but I do agree with George Carlin's remark, "We're circling the drain."

Also, it's a myth of having a voice in government... that only works if you connect directly with your elected representatives. That's why lobbyists are successful ... they connect and bring their ideas of how to do something. Representatives work with those that offer positive solutions (not necessarily moral or ethical solutions - but simply solutions).

Unfortunately, many of the rightwing and religious groups understand the process all too well - they bring large numbers of voters AND their positive solutions to whatever is up for congressional vote... and their elected representatives respond accordingly.

What doesn't work ... angry voters who offer only criticism without workable solutions or doable answers. Also, it is a rare day when a single person (excluding billionaires) can influence an elected representative.