Of Fathers, Birthdays and Presidents 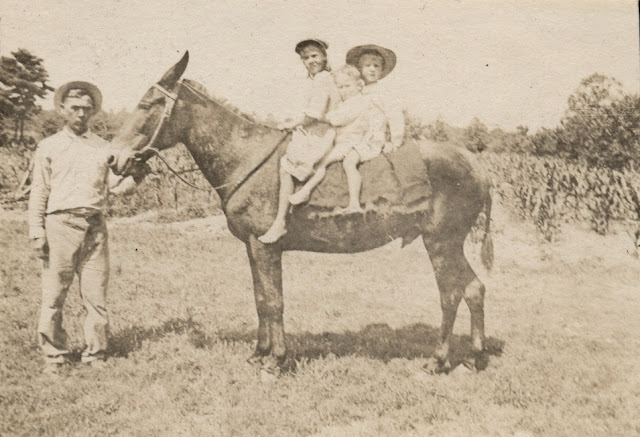 Dad (in straw hat), his sister (in front) a cousin & their Uncle
down on the farm in Southern Illinois   ca. 1918
﻿Yesterday would have been my father's 101st birthday. Hard to believe. He was born in 1910,  very much a turn of the century time in this country. William Howard Taft was President. Neither the telephone, the refrigerator or the zipper had been invented.  The Titanic would sink when Dad was two years old.  The U.S. was changing from a predominantly agrarian society to a manufacturing one. People who could no longer subsist on farms were moving to the cities as were immigrants making their way to the "land of opportunity". My father grew up on a farm in southern Illinois on the banks of the Ohio River. He always remembered it with great fondness and longing. They were poor but not starving. His father was an anomaly in those days:  he had a college degree in horticulture. His mother had been a milliner in the city of Chicago but his father moved her to the farm. She was, by all accounts, not happy about it. 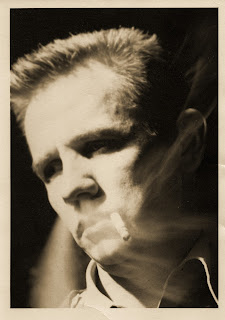 Dad moved to Chicago to work for Florsheim Shoes in the advertising dept. He worked as a "paste up artist" which meant he cut and pasted drawings and words to sheets of paper in the form of a print ad. These were given to the newspaper to be typeset. It was 1929; he was 19 years old. He vividly recalled the stock market crash. His workspace in the Florsheim building was below street level, with those tiny grated windows looking onto the sidewalks at people's feet.  He remembered a jumper landing outside.  He watched his money carefully from then on.
Dad put himself through colleg,e taking night courses at Northwestern University. He never finished and it always bothered him. He eventually went to work in a new industry: radio. He was selling national advertising air time to big ad agencies for a company that represented radio stations across the U.S. and Canada.  The business was in its infancy and he was there.
Dad smoking (he'd quit by the
time I was born) ca. WWII.  When
I was little, I thought he re-
sembled Frankenstein's Monster!
The United States entered the First World War, "the war to end all wars" to which it was mistakenly referred, in 1917.  Of course, the war reparations act led to a second world war.  As a result, my father enlisted in the Army Air Corps for WWII. By then, he'd moved to Los Angeles to start his own rep firm.  He walked away from the new business and beginnings of stability at the age of 31 to defend our country. It took him quite a few years to recover what he'd lost.  By then, he'd been married and it had been annulled; a fact I didn't learn til my mother died.  He kept it a secret but it explained much about him and his breaking his engagement to my mother and his melancholy.  But, that's another story. 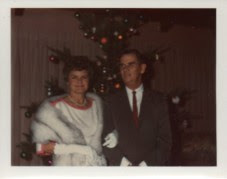 Dad and Mom were married in 1950 and together til her death in 1997.  He lived another ten years without her, on his own, in the lovely quiet area of the Central Coast of California, where they retired.
He died during a lunch of take-out Chinese, sitting with his caregiver, a lovely lady named Isabel. He had a heart attack and could not be revived.  I remember all the times we ordered Chinese take out or he'd take me to China Town in L.A..  It was his favorite food and I was happy he was enjoying it at the end.

Mother and Dad at Christmas time  circa 1967


I flew to CA immediately and set to work on funeral arrangements, along with my brother, as well as the celebration I wanted to have at his home.  The turnout to Dad's service was amazing.  My brother and I thought maybe twenty five at the most.  We probably had closer to 60 and a bunch of my friends made the trip up as well.  That meant so much to me.   My brother and I gave eulogies; mine was about how crotchety Dad was but how loving and kind too.  He was a mixed bag as are most of us.  We gave him the military funeral he'd planned for and it was so moving.  He had full honors with an honor guard, the flag folding, taps and a 21 gun salute.  I'll never forget it. 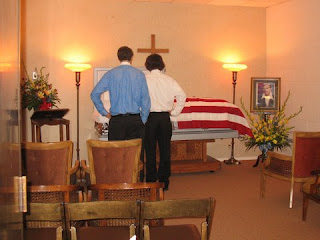 My sons pay their last respects to PaPaw
He and my mom left my brother and I, my two sons, his two daughters and, so far, a granddaughter.  My brother and I think of him often.  We can laugh now at things that were not so funny when we were young.  I wish I could tell him that. 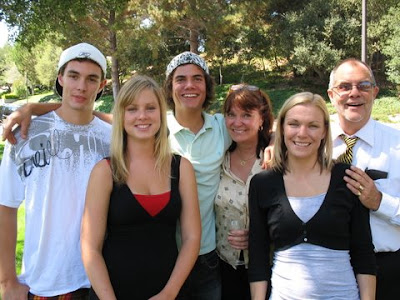 Posted by California Girl at 2:46 PM

Awww. I love that photo of him smoking, so modern for its time. Yeh I miss my dad like a limb. It's strange, no matter how old you are or how old they are when they die, the pain is no less.

Ahem... Just to clarify - Alexander Graham Bell patented his telephone in 1876, and there was an interstate telephone network up and running by 1890.

That is just the sweetest post about your dad. :)

The photos are all amazing.

Cute that he died eating his favorite Chinese!

What a touching tribute to your father. I related to your comment about his being complex as most of us are. My Dad, too, but he's still alive and kicking at 94. He talks about all the change he's seen in his lifetime. Thanks for sharing your memories.

Roy: Starting with you because, Oh God!, I was copying bits from a timeline, decade of 1910-20, and that was on there. I paused thinking it sounded late but was in a hurry. Goes to show you can't believe everything you read on the internet and it behooves me to do my fact checking with more thabn one source. Thanks for the correction!!!!! I'm chagrined.

Brian: you are a sweetie. I love it when you write "smiles" which you do all the time. You must be one happy guy. We already know you're a super dad & husband. xo

Baino: I can actually remember finding that photo in his dresser drawer. It was probably a 5x7 or larger. I kept staring at it thinking it couldn't be my dad. Not sure how old I was. Old enough to go through the dresser drawers, that's for sure! It is rather a cool photo.

Betsy; Thanks. I clashed with my father for years. OMG, did we have our differences, especially politically! I really disappointed him when I became a screaming Liberal. hahaha!

Grandmother: Thanks and congrats on your father reaching 94. I'm not sure I want to be that old but I guess I'll know more when I get there. Dad said your perspective about dying changes as you age.

CG thank you for this very eloquent window into your life. Your dad saw so many changes in his lifetime. So have we. I admire and respect that he sacrificed to protect and serve his country in the prime of his life. This was a beautiful tribute to you dad.

enjoyed your post - Your Dad had a good long life. My parents left me when they were in their sixties. There is much about our culture to be found in between the lines of your story and the big events of his life. Stock market crash, WWII. thanks for sharing.

Tanna: Dad did see many changes. I am sometimes astonished by the events he was privy to and some of the people he met as a young man. He said you could shake hands with the great baseball players in the old days. They were not kept away from the crowd. He met Babe Ruth & Lou Gherig when they played the White Sox. I mean, wow!

Lisle: What really amazes me is how little we know our parents. We don't really know their lives at all because they never tell us. I was flabbergasted my father had been married during WWII and never told anyone. My aunt, his older sister, would have been the one to know but she was gone by the time he told me. He said he was "ashamed" the marriage had been annulled and I think it broke his heart. So sad.

Something we have in common, D. My dad was born in 1890. He was 63 when I was born. Unfortunately, he passed away from lung cancer when I was just 9. He was uneducated, but he was a hard worker and a good man. I wish he had lived until I was an adult so I could have known him better.

Here's to fathers and their little girls. :)

Susan, I thought my parents were old! Your dad was 63 when you were born...were you a change of life baby or was your mother younger? Those were usually the only reasons that happened back in the day. I am so sorry he did not live past your 9th year. It must be very hard to lose a parent at such a young age. Thank you for sharing this.

That was a great tribute to your dad! The things he must have seen in his life. The advances that he witnessed! The photo of him smoking is a classic...
Great great post!

Such a nice tribute to your dad!
We have so many similarities in our lives, as I think we've noticed before.
My mother is from Southern Ill,(I think it's Southern- Dixon) and worked in an advertising agency in Chicago. Your father started out as a paste-up artist and so did I. I think we've already discussed some of our other similarities.
Barbara