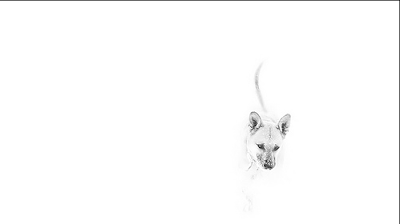 As you can see by the B/W photograph of our dog, Dewey, we are having a big winter storm today. Some (CNN) are calling it the "biggest storm of the year" although I don't know if they mean this year or last year or the winter portion of the year or what. The New England states were not hit nearly as hard as those in the Mid-Atlantic. Having lived in Virginia for many years, I know how tough it is for them. Their transportation departments are ill equipped to deal with heavy snow conditions so the cities usually throw up their hands and close down. As I understand it, today is the first time in six years that NYC schools closed. Ah well, one more snow day more or less won't hurt anyone. And it is so pretty.
Posted by California Girl at 3:04 PM

I am soooo thankful to be in a warm spot, though there is a "cold front" moving in today... it will be nothing like this! Thank you so much for stopping by my blog and your wonderful comments. Put Tyler on your calendar for a spring visit sometime and stop by for coffee on the porch!

While Texas is not exactly on the way to California from NH, I've been thinking more and more about taking a trip to visit Austin, which I've never seen. So, if I did, I would let you know and would definitely meet you for coffee. Wouldn't it be interesting to meet fellow bloggers?