The Kindness of Strangers: In Memoriam

This post was originally published May 6, 2009. Today we learned this man, so kind, so beloved by all, died this weekend and we are saddened by his passing. 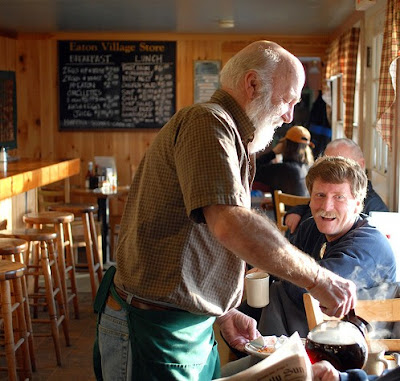 This is a photograph of a man in our town who runs a wonderful little coffee shop. When we first moved here, our entire life savings were on hold for two weeks til the bank "cleared" it for transfer. We had, as I recall, about $110 in cash and we ran through that right away. In those first two weeks, we found office space and set up shop working in the main village. It was lunch time, we were hungry and I took a stroll down the main drag to find a restaurant and order a meal to go. All I had was my credit card.

The first restaurant didn't take credit cards. Only cash. Same with the second restaurant, same with the third. I kept thinking I was in small town hell and I wandered into this fella's place. It smelled like a good old fashioned lunch counter, thick hot cheeseburgers with grilled onions, homemade berry pies, strong coffee. He asked for my order but I told him my story first. No sense wasting his time if his policy was the same as everyone else. He looked me up and down and said,

"I don't take credit cards. What do you want to eat?"

Seriously. He took my order, made our lunch, gave it to me in a paper sack and told me to pay him when the bank transferred the money. I think it was about $11.00.

When the money came in, I was in his place like a shot. We've been friends ever since.

My husband took this photo of him recently in his new place. He is much beloved.

In all the years we've moved around, I've had wonderful encounters with people, particularly in smaller towns. This is one of my favorites.

Posted by California Girl at 10:28 AM

This made me both happy and sad. First, for the glimpse into the life of a wonderful man, and then sad that he has passed on. Thanks for introducing us, Cali. You were both blessed.

I love this, GC. The world will be a little dimmer without him I suspect.

smiles. what a cool man eh? i am sorry for his passing...we need more people like that in this world...

Lovely story! He sounds like a really kind human being! RIP

What a wonderful story. Being kind has such an impression on us, doesn't it? Love that.

That is so sad. People like him make the world a much better place.