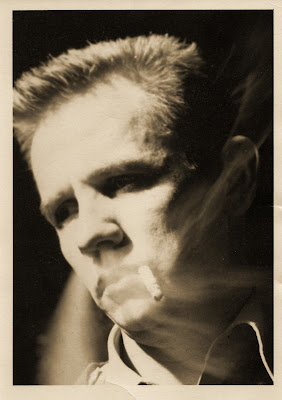 I love this photograph of my father because it doesn't resemble the man I knew in any way shape or form.
The man I knew smoked only an occasional cigar and drank an occasional sherry or glass of wine, barbecued weekends, loved Chinese food and take out, and dressed like Don Draper every work day of his life because he was an ad man.
This photo was probably taken when he was in the USAF during WWII.  The hair cut, the shirt, the hard-ass look.  I thought this was Frankenstein the first time I found it in the drawer of his high boy dresser.  I was probably 7 or 8 and it scared me to death.  He had to reassure me it was just a photo taken when he was young and he was definitely not a monster! 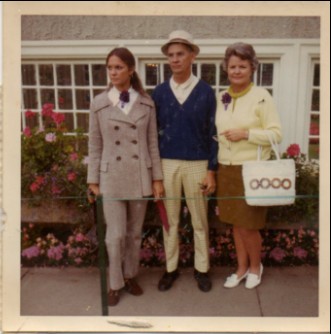 I remember my father is as a loving but stern, old-fashioned man with a very rigid set of principles.  He was born in 1910, another era light years from the Sixties when I was coming of age.  We did not see eye to eye.  Yet, he instilled his faith in God, his work ethics, his frugality and his loyalty in my brother and me.  We are the better for those things.

Dad loved an occasional cigar, a pancake breakfast with bacon on the side, a good walk, his dog(s), nature, God and country. He was never so proud as when his two grandsons were born.  I think they were the light of his old age. 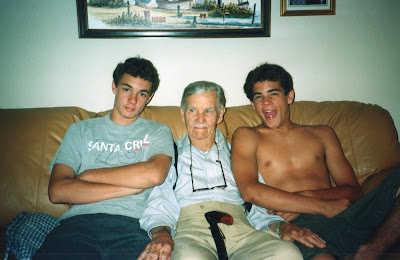 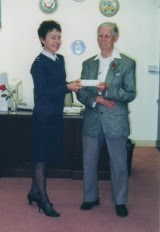 He was nutrition and supplement minded before it was fashionable.  He read the Rodale books and followed a predominantly naturopathic road when I was young.  I remember him ingesting Tiger's Milk, fish oil, B supplements, high fibre food, whole grains, raw honey.  He walked that walk.  He lived into his late 90s and was still mobile.
Dad presenting retirement document to a retiring Colonel Vandenburg AFB, 2004

For those of you old enough to remember, "My Dad" sung by Paul Petersen on The Donna Reed Show

For those of you about to be new fathers...

Posted by California Girl at 11:38 AM

So very nice to hear from you.  How are YOU doing?  You had a very tough year last year and I know it takes a long time to recover.  I hope you are healing from the losses.  I hope you are well and happy.  Thank you for the sweet comment.

That is such a cool picture and he truly lived a long life.  I think most of us girls had a crush on Paul Petersen at that time.  We always watched The Donna Reed Show with our parents.  I think I need to eat more fiber.  Oatmeal Cookies sound like a good way to do this.  That is the only way I can eat oatmeal, it has to be a dessert.  As a child when my tonsils were so bad that my throat was swelled up so much, the only thing that they fed me was cooked oatmeal and after years of eating it while being sick, I just cannot eat it in that form.  I would truly have to be starving before I would eat it.

Anyway it is so funny to look at pictures from when we were teenagers back then.  It seems like it was so long ago and those are different people in those pictures but then the memories come back and we realize that was our life.  I think I was almost a teenager before I had a picture taken in color.  I think all the previous pictures were in black and white.  Even most of my senior yearbook was in black and white.  Nowadays I think you would have to search very hard to find any black and white pictures in a yearbook.

Your dad saw and lived through so many changes in his lifetime.  If you think about it so have we.  But your dad's life had to be so amazing.  You were so blessed to have him for such a long time.  Such wonderful memories you must have.  Very blessed indeed.

Thanks Tanna.  He'd probably be surprised by the number of times I've written about him.  We fought all the time!

This is a beautiful tribute to your Dad, CG.  Just beautiful.

I'm surprised you were able to see it.  I have been goofing with it the past 30 minutes determined to find a video of Paul Petersen singing "My Dad".  The one good one I wanted to use has been disabled.  I finally found one that shows the 45 playing while he sings.  But, the first one gave the back story from the show.  It aired in 1962.  I actually remember it.

I love this post! Your dad was new age before new age was even born! Thanks for introducing us. I am honored. :-)

Brian, my dad was anything but a tough guy.  He once told me he only weighed 125 lbs going into WWII.  They had to fatten him up!

your dad sounds like quite the guy...that first pic def makes him feel tough....ha cool pic of you as well...happy fathers day to all the dads in your life...