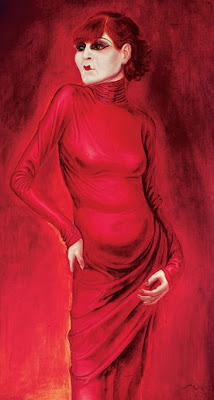 Wilhelm Heinrich Otto Dix, Germany 1891-1969,  is widely considered one of the most important artists of the Neue Sachlichkeit.   Thanks to the Brown Shirts, also known as the SA, much of his work was destroyed after Hitler's rise to power.  At the time, he was best known for harsh depictions of the Weimar Society between the world wars...


"...which in particular attached Germanic national myths which had been sculpted on the ideals of militarism and human sacrifice for country...and stood in contrast to the Weimar Republic's response of hedonistic escapism in the face of impending social chaos and economic doom." from"Addicted to the Trauma of Realism" MadamePickwickArtBlog

Portrait of the Dancer Anita Berber 1925


Dix paintings showed "art so tragic it borders on the comic. Its the surreal and fantastic looking, finding aesthetic form within an idiom of graphic depiction.A visual representation bordering on the burlesque, of straddling a new art zone between the romantic and reproductive, the product of modern warfare and its unlimited power to depersonalize and defigure the human spirit." MadamePickwickArtBlog 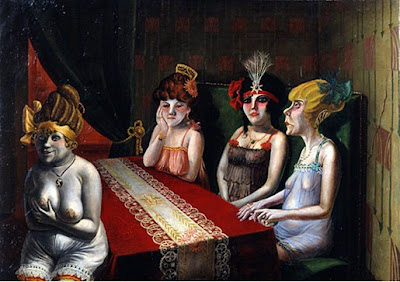 The Salon 1921
There are numerous half-nude female models, signaling an unrepentant, usually unflattering fixation on female breasts; Dix often seems to have equated women with dumbness, whether brute or weak. But he could be intermittently sympathetic, especially concerning the downtrodden or the creative, as evidenced by early portraits like “Working-Class Boy,” which calls to mind Alice Neel’s paintings, and “Unemployed Man,” and by later ones of the poet Iwar von Lücken and the philosopher Max Scheler. A borderline case is the rarely exhibited “Two Children” from 1921, whose subjects seem innocent and open, despite strangely deformed features, and is more Diane Arbus than Neel.    New York Times 3/11/10
Most astonishing about his work are the variety of styles in which he paints. He explore new genres over the course of his career changing his style continually. 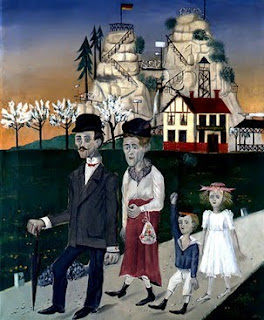 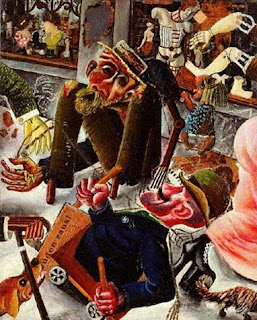 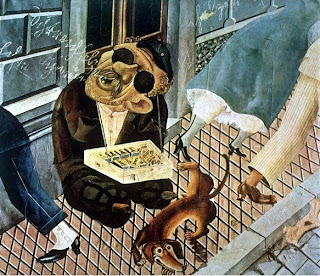 
As with most German artists of his generation, Dix’s formative experience was World War I. He emerged from nearly four years in the trenches physically unscathed but psychically scarred. He attempted exorcism with “Der Krieg” (“The War”), a suite of 50 mostly masterly etchings published by Nierendorf in 1924. They convey a searing sense of the physical horror of war — most prominently wounded and rotting flesh — that remains unmatched in the history of art."    New York Times 3/11/10 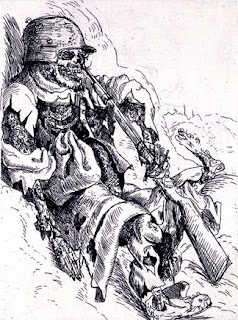 Dix’s fifty prints that make up "War" are absolutely horrific and utterly terrifying. The pieces are smaller and darker than Beckmann’s, and more frightening. While Beckmann’s war takes place at home, on the streets and inside houses, Dix’s war is fought in the trenches, where soldiers become rotting skeletons, bodies hang from barbed wire, and even the survivors are battling death. Using different techniques, including etching and drypoint, Dix, who earned the Iron Cross in WWI, relates the hellish nature of war in gloomy panels that, taken together, would make one scary graphic novel — and are just as relevant today as when he made them in 1924. In "Soldiers’ Graves Between the Lines," the moon casts an eerie shadow on the dark night. Two skulls appear to be drowning in the earth in "Buried Alive." In "Shock Troops Advance Under Gas," four ghostly figures are charging forward in gas masks, evoking current fears of bioterrorism. There appears to be no relief in sight for the troops in "The Second Company Will Be Relieved Tonight." Several pieces show soldiers dancing with grotesque women, some of whom look like ghosts. In "The Madwoman of St.-Marie-à-Py," a lady erupts, a dead body at her knees. The "Dead Man" from St. Clement at first could be sleeping — until you look closer and see his brains oozing out of his head. Don’t rush through this powerful room; walk through it several times, take a seat, and breathe in the horror. It’s an exhilarating yet paralyzing experience.   This Week in New York 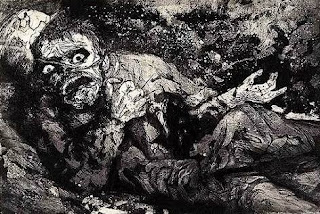 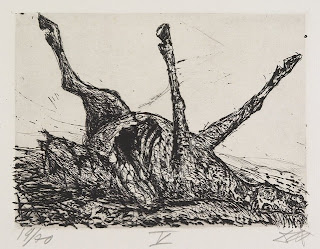 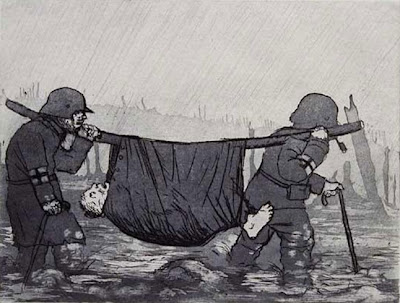 As German painters often still do, Dix believed that the medium’s entire history — especially the German part — was available for his use. He painted in the small-brush smooth-surface manner of Albrecht Dürer and looked to Lucas Cranach for inspiration. With contemporaries like Christian Schad, he contributed to a perverse new style of realist painting, called the New Objectivity (Neue Sachlichkeit) that emerged in 1926. wikipedia 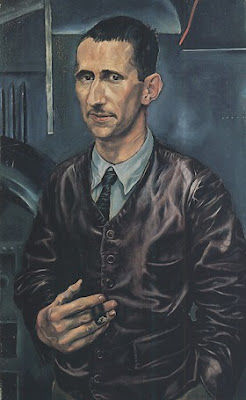 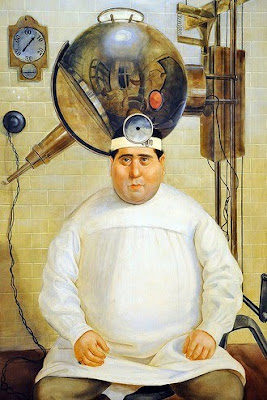 "Otto Dix created this painting titled The Seven Deadly Sins in 1933. It is an allegorical painting representing the political situation in Germany at the time, and was created immediately after the Nazis had Dix removed from his teaching position at the Dresden Art Academy. 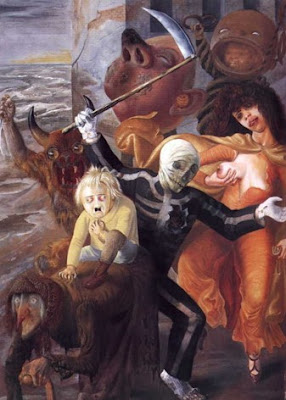 The Hitler Nazi regime destroyed many of Otto Dix’s paintings after the 1937 exhibition, ”Reflections on Decadence”. He must have been incredibly prolific. There are hundreds of images on the internet. 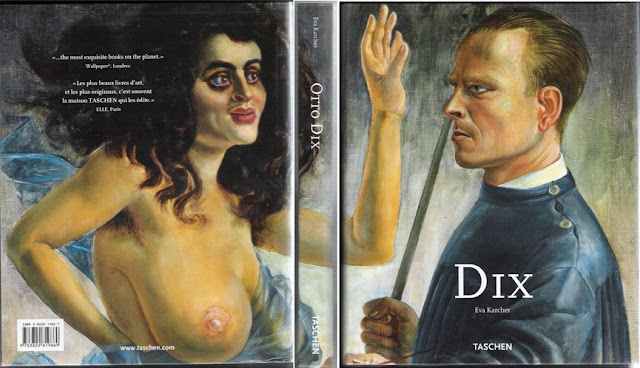 Posted by California Girl at 10:49 AM

oh you added some...interesting symbolism again...something about the one with the doctor...

Hi! C.G.,
This was an extremely interesting post and very detailed, well researched with very interesting paintings on display...I feel that artist Otto Dix's paintings are very brutal, but yet very honest paintings.

Being an artist, I must do further research on artist Otto Dix...By the way, I read in a book about film noir that the Weimar period...was the period that open the doors...leading to film noir.

I also subscribe to the Sentinel (A Film Noir Quarterly Newpaper) and they were featuring a series on German (Directors) immigrants and I think that the Weimar period was mentioned in the articles.(I will go back and reread the articles.)

Brian: lost your first comment because I kept re-writing and adding to this. I put so much work into it, I finally decided to make it my TT, with the "Brown Shirts" as my connecting theme.

DeeDee: According to all the research I did, Erich Maria Remarque was influenced by the "Der Krieg" (the war etchings)when he made "All Quiet on the Western Front" and Fritz Lang was influenced while making "Metropolis" also the title of a Dix painting. I see many influences in his work.

Tony: this man was so ahead of his time. I agree, he's very contemporary and his themes are appropriate today. His influences were, obviously Goya & his etchings on war, Cranach whose work obviously influenced "The Seven Deadly Sins" and others. He was/is a magnificent artist and I'm just now learning of him.

creative tie-in to tt with the brown shirt reference.

i'm always moved (and haunted) when i encounter works by dix...the cleveland museum of art has a couple of his pieces. I'm racking my brain trying to think of where i recently came across several of his works - i know it wasn't the neue galerie in nyc although i would have loved to have known about the show - looks like it was in nyc in june when i was there - but boy, talk about one intense show! dix and beckmann!!

did you perchance see it? I'm confused.

kimy: I sincerely wish I could see it, but, no. I heard about it on CBS Sunday Morning and was so blown away by what they presented I had to delve into his work and I just kept going...

Mama: Yes. If you really like his work, look it up on google images. there are hundreds and they are fascinating in their scope and genre variety.

This was extremely informative. I'm so glad I came by early to check it out!

Thank you for this. I am an image freak and it is always interesting to discover new artists. A gfreat take on TT.

I am german - and yep - the color brown is not a famous color in german history.
didn't know the painter (and wouldn't want to have one of his pictures hanging in my living room....)
thanks for this excellent research!

Fascinating post! I'm off to dig up more Otto Dix. The woman on the book cover looks just like Helena Bonham-Carter!

Wow...I've never heard of him! Very interesting! And what IS with all those droopy boobs? haha

Angel: Thank you for that, I'm glad you came back too. I spent 3days on this. Why? I became fascinated by the story, the art, everything.

Annell: I thought so.

Claudia: I couldn't believe I'd never seen his work nor heard of him. His work is disturbing, thought-provoking, colorful, frightening and emotionally charged. The influence of other artists upon his work amazes me.

Bets: I know! He must have known alot of older women.

I plan to see that show this weekend.

Alan: I really hope you re-visit this post and tell us about it. I would love love love to see the show but it's not gonna happen.

Yes this is so very interesting! Definitely scary view.

What a brilliant take on the theme and that was a really interesting post. I, too, love lessons in art history. Thank you!

Love the post, it is like a really good meal - satisfying, filling and a pleasure to experience. But unlike the said meal it has left me wanting more.

Lyndsey: Thank you for visiting and welcome!

Betty: Thanks for the compliment. Art History minor, here.

Alan: That's high praise and I appreciate it. I so wish I could see this exhibit. One of my commentators (not sure of the right word here) is going this weekend, lucky fellow.

hey yes i did see this blog u did on Dix and it made a reminding impression on me.. very powerful stuff. thanks for looking at my art and all your comments by the way
:)

lani: Thank you for visiting!

Paul: Nice to read you. I thought you might like this.
"Powerful" is indeed the word for Dix.

I like your work very much. It's a
pleasure to remark.

All I can say is "Wow!" Of course I never let that stop me. Those are some powerful images. I'd like to take a peek into this guys head. Amazing...
thanks so much for sharing with us, it was totally interesting.