The Mad Men Are Back 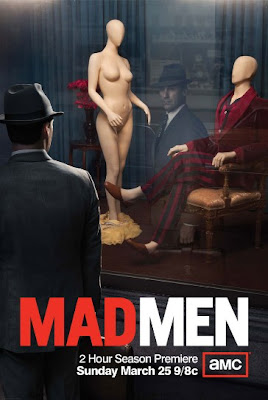 Getting my fix while the show has been on hiatus due to contractual disputes between the creator and the network (or whatever) has forced me to renew my acquaintance with a show I originally deemed a "very well written soap opera dramatization" of the early 1960s.  I have greater respect for the writing and character development and psychological turmoil of said characters sent against the backdrop of the turbulent Sixties in which I was growing up.


I may be an addict, but I'm now an informed addict.

Posted by California Girl at 10:23 AM

that's what happened to it!...we just got a satellite dish and i have been looking for it. They do the 60's so well. i have only seen the show a few times but i know addiction is possible.... i watched my parents play that era....and the show is right on!

Netflix carries all 4 seasons in instant streaming.  It may be carried elsewhere too.  Viewing the series second time around has given me a better grasp of the nuances in the characters.  I previously thought some characters 2 dimensional but they were fleshed out to 3-D as the seasons progressed.  Compelling show.

ha have you seen all the hub bub over the billboards for the show...it was all over the news here today...still have yet to see any of this....

I heard the advance publicity in NYC was going to be spectacular BBs around Times Square and in the subway tunnels.  These folks do some of the best marketing around.  There just aren't many shows who can go on hiatus for 18 months and come back with an audience.

oh great. i was wondering when Mad Men would be on again. I hate it when there's so much time in between seasons. I hadn't heard about the dispute. Interesting.
Nancy

Here we are, willing to wait.  Hollywood should take this to heart & deliver better programs instead of churning out crap for consumption.

I am an addict, too. I can't WAIT to find out where they take it now, after all this time. Sally must have grown up!

It is one of those shows that never spoke to me.  I've never watched it.

I was thinking the same thing last night as I watched Episode 1 Season 4.  Those kids will be unrecognizable.  I'm wondering if Betty's moods will even out and if Henry Francis will still be madly in love with her.  Then, there's the Joan/Roger thing.  Also, if you look at the preview posted, there's intimation of a relationship btwn Don & Peggy.

We can't all like the same things.  I love episodic soap opera style shows if they are well-written.  Another show I loved was "The West Wing".  I watched it religiously; reruns too.

Thank you for visiting and commenting on my blog.  I hope you return!