The Art of John Brack 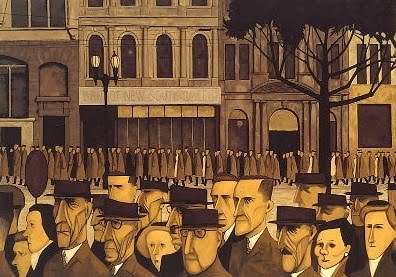 Collins Street 5pm by John Brack 1955
﻿﻿Months ago I did a Theme Thursday on the artist, Otto Dix, with whom I was previously unfamiliar.  I spent days doing in-depth research because I was so taken with his work.

Recently, on iGoogle, "Collins St. 5 pm." popped  up under Art of the Day.  Again, unfamiliar with this artist, I wanted to know more.  His work brought that of Dix' to mind because of his unusual portrayal of people, his use of color, his depiction of everyday life.  He's one of Australia's most famous artists.


By the age of 16 years, John Brack was working in an insurance office in Melbourne, one of a crowd of daily commuters who trod the pavements to and from their offices. On one occasion in the city, he saw a Van Gogh reproduction in a shop window, and he was so captivated by it that he enrolled in night classes at the National Gallery School. He went on to paint Collins St, 5 p.m. (completed in 1955, and acquired by the NGV in 1956). It is a graphic example of his ability to observe and to communicate not just a scene, but its mood. It is a compelling image. It invites us to wonder about it. John Brack’s intention was to have the painting work on different levels of meaning while appearing deceptively simple   dgdesignnetwork

Unreal City
Under the brown fog of the winter dawn
A crowd flowed over London Bridge, so many
I had not thought death had undone so many.
T. S. Eliot, The Wasteland, ‘The Burial of the Dead’, 1922

Brack first achieved prominence in the 1950s. He joined the Antipodeans Group, which protested against abstract expressionism, a genre whose notable artists were Jackson Pollock, among others. 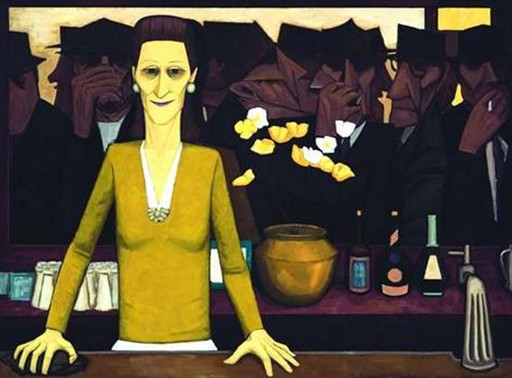 ... The Bar is widely regarded as the companion piece to Collins St, 5p.m. The painting marks a time in Melbourne when hotels were forced by law to close early (first introduced during World War Two and continued until 1966 when 10 o’clock closing became the norm). The phrase ‘six o’clock swill’ was used to describe the behaviour of patrons who crowded around the bars to get a last drink before closing time. In this work, John Brack cleverly uses the device of a mirror behind the bar to make it possible for us to see both sides of the bar at the same time. We stand with the patrons facing the barmaid as she waits on her customers. She looks tired and seems resigned to deal with this unruly crowd and the urgency of their demands – ‘One more beer over here, love!’  dgdesignnetwork

"The Bar" struck me immediately with it's similarities to one of my favorite Manet paintings, "A Bar at the Folies Bergere". According to Wikipedia, John Brack's style was notable for his use of drab colors in his early works.
. 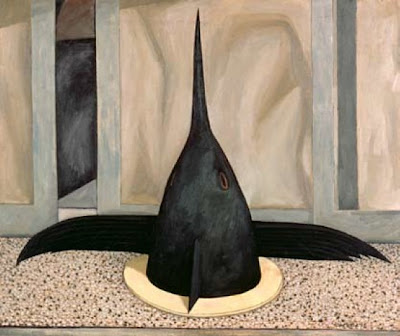 I find "The Fish House" disturbing. But I love "The New House". My favorite painting is this one. It reminds me of a Fiftie's ad for a men's clothier. 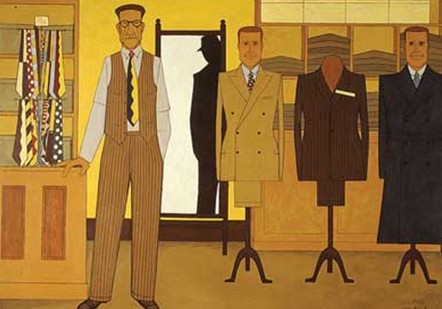 The 1930s was the era of the Big Bands and Swing music. In the late 1960s it was ballroom dancing competitions which prompted John Brack to create a series of works. He was intrigued by the willingness of human beings to try and master absurd ritual movements to a strict dance tempo. What was this strange behaviour really about? Brack’s stunning use of fluorescent colour highlights the theatricality of these farcical events. In the painting, Latin American Grand Final (1969), Brack can stay behind the canvas no longer, and he paints himself standing at the edge of the dance floor continuing to observe. 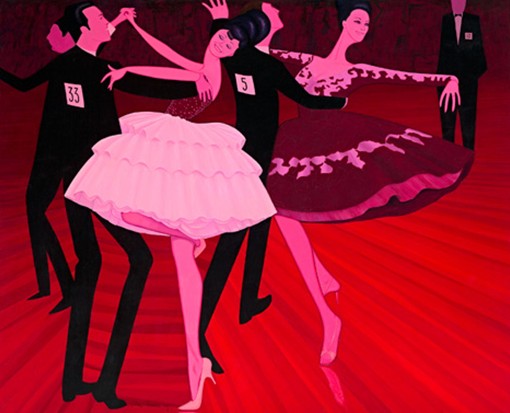 There is so much more to see. His style changed with the times but he remained unique. The National Gallery of Victoria in Melbourne held a major retrospective of his work in June 2009. It was the first in twenty years. For more information and insight into his work, there's an excellent NGV Education Resource. 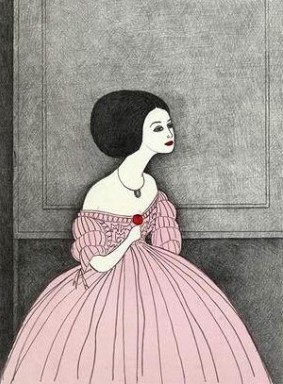 Posted by California Girl at 7:55 PM

thanks for the head's up on brack -he's new to me, but his work is hauntingly familiar...

my new fav artist find is the german artist katharina fritsch...i'm on a mission to find some of her work first hand (opposed to simply looking at other people's snaps - altho that's good till whenever)

Hi! C.G...
After reading your post...I approached my comment box like a blank canvas.[Translation: So, many thoughts on this artist Brack, that I'm unfamiliar with, but now I want to learn so much about...with your introduction to him through your very informative post.]

By the way,
His painting Collins Street 5pm [by John Brack 1955] reminds me Of a poem by a fellow blogger/poet name Claudia, and how man/woman goes through the same mundane motions in a punch the clock-like fashion.
[All Of His Paintings Are Beautiful and very interesting:
My Favorites: Collins Street 5pm Men Wear,1953 The Bar,1954 and Latin American Grand Final 1969]

So, much information to absorb when it comes to his artwork...Yes, I'm familiar with artist Otto Dix's artwork, but not with artist John Brack's art-work yet,[with "yet" being the operative word.]

C.G...I enjoyed viewing and reading this "journey" through artist John Brack's life and times.
Thanks, for sharing the links too!
Cont...

"Brack first achieved prominence in the 1950s. He joined the Antipodeans Group, which protested against abstract expressionism, a genre whose notable artists were Jackson Pollock, among others."

Hmmm...I didn't know that there was a group Of artist that protested artist Jackson Pollack and other abstract expressionist artists' art-work.

Personally, I like Pollack's art-work...Please! someone help me try to locate one Of his [Pollack's] painting(s) in my attic.

I love his work, thanks for sharing this.

The bar is a great work of art, so telling about his time!
Thank you for displaying the Iris. Would you like me to send you a smaller version of it by email so you can get the whole flower in the sidebar? Need to look if I have your email... Just let me know:)

I have never heard of or seen his work. Love it! There is something appealing in the straight lines and tone on tone. I agree The New House is delightful and even though it seems stark or maybe even stiff, there is a warmth in the couple that makes me smile. :)

Yea,He's New To Me.Yes, An Interesting Style.I Will Investigate Him Further!

Soon as I saw the first pic I'm like? Collins St? There's a Collins St. in Melbourne. Sure 'nuff the memories came flooding back. I remember studying him at school. Almost a simplistic art deco look to his work but definitely iconic.

Your post... and the comments were enlightening about Brack. Love his works.

THANK YOU for your thoughts this morning. I can't speak for Amanda, but I'm going to enjoy loving on these two little guys! I can tell you did a great job raising yours! blessings ~ tanna

Fantastic and informative post! I was not familiar with Brack, but I will be on the look-out for him. The first painting is remarkable. The automaton-like people in the background might be how his former employer, the insurance company, viewed its customers. I love how he reduces the human face to their simple geometric form, yet he manages to make each face unique.

Thank you for sharing your research with us.

I enjoyed this - it's good to learn about an artist through someone else's research! He was unknown to me, too, so you've obviously done a service to him and all of us by introducting him. And I always appreciate seeing art about which I do NOT think 'coulda done that myself'.

I agree with Dutchbaby - I thought immediately that Collins St. was probably a portrayal or inspiration of his own monotonous march with the drones to their cubicles before art hit him over the head with a reason to be expressive. Great post - thanks for the introduction to a very cool artist.