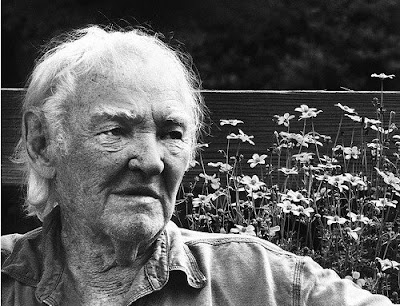 My husband's father died in his sleep early Monday morning. He would have been 85 next Monday.

He was many things to many people but most of all he was my husband's dad. His passing leaves my mother in law, his daughter and my husband and one brother, now 90 years old.

In late May, he had a stroke which left him paralyzed on one side and unable to communicate. Most of the time he just slept. We are grateful he did not linger. His robust life had already been diminished by Parkinson's and his quick mind, razor sharp, was gone. He understood things but it took a while. He could still tell a funny story but it was too often the same one. The stroke destroyed even that, leaving just a wisp of the man we all knew.

Our friends have been wonderful, calling, emailing, each remembering a different story about the him. Our oldest friends knew him from waayy back. He was quite a character. He was athletic, he was funny, he liked to party and boy, could he dance!

I choose to remember him as "Big Daddy", the nickname I gave him God knows when. It pleased him. He always referred to himself as "the red headed kid at the bar" even when his hair turned white.

Portrait of His Father by Cole Scott, Summer 2008
Posted by California Girl at 4:40 PM

Our family lost my husband's father this year too...it was a deep and specifc loss from our lives! Also, I LOVE the title and explanation of your blog...I'm on this journey too!

I am sorry for your loss, but also moved by your tribute!

Very sweet and kind tribute to what sounds like a life well lived. RIP Big Daddy.

What a loving tribute. Lost my mother (90) this year and even though expected it is still very difficult. My condolences.

A very loving and beautiful memorial to your father-in-law. I am glad he did not linger long, but long enough for everyone to prepare. You and your husband's family will have my special thoughts this weekend.

sorry to hear about your loss. touching post. my wife lost her mom about 18 months ago. was difficult. her dad was up the other week, sharing stories and tears. my heart goes out to your hubby and his family.

What a beautiful tribute to a wonderful man. Your love for him really shines through. Hope that your son is doing better, now. I will keep you all in my thoughts
and prayers.

Sorry for your loss in the family, and that was such a touching tribute to him. Lots and lots of love came through and shows that he will be really missed.

Almost 8 years since my father passed away and sometimes you still think about how you want to say something to him or ask a question, but then you remember you cannot. They live on in our memories and hearts.

I hope all is well with everyone there and may the next few weeks be blessed.

A warm and loving tribute for "Big Daddy".

Meg: Welcome and thank you for the comment. My condolences to you as well.

Otin: Thank you. that is a nice compliment.

Nancy: Thank you Nancy. He's in a better place now.

Bonnie: Thank you. I am sorry for the loss of your mother. I think of mine almost every day.

Pop: Thank you. Yes, we were really hoping he'd go quickly. My husband would come home from the nursing home, his stomach in knots, after seeing his father in that post stroke condition.

Brian: Thank you. My sympathy to your family over the loss of her mother. Your children are still young and I imagine you think about their not knowing her as they grow older. My sons were 8 & 9 when my mother died. It hurts.

Marguerite: Thank you so much.

Mrsupole: Thank you for sharing your own story. I know exactly what you mean. I just talk to my folks anyway and wait for an answer to come through.

How are you faring from your operation? I didn't expect to hear from you this quickly!

Susan: Thank you and hugs back.

What a lovely tribute! I'm sorry for your loss, but at the same time am happy to hear that he didn't have to suffer too long!

A warm and loving tribute for "Big Daddy".

IQ: thank you so much. We'll be toasting him tomorrow on what would have been his 85th.

Skye: thank you and I agree. It's a blessing.

Jazz: just went on your site and was almost blasted off the page by the radio. Now I need to spend some time there and figure out if you are promoting a radio station or are a serious blogger...or both!

Hi! C.G.,
Please let extent my condolence to you, and your family. And I can only "echo" what the other commenters have said, and that is
what a very "thoughtful" and
very "loving" tribute to your father-in-law.

Take care! and just like Mrsupole said, God Bless! (you, and your family.)

Thanks Books, we're having a get together at the house tomorrow (Monday) night. We'll all lift a glass to his birthday and friends are bringing food and I'm cooking and I hope it makes my husband and his mother happy as they are both grieving a great deal right now. No matter how much you prepare, you're never prepared.

Correction: Please let [me] extent my condolence to you, and your family
California Girl,
That is nice...I guess reflecting on good time shared...may help ease the pain of loss. But, like you, I have recently suffered a lost in my family.
Therefore, I don't think that the pain can ever be "eased," but we must learn to reflect on the past, live in the present and in order to move... C.G., that sounds like a great quote..."No matter how much you prepare, you're never prepared."

Beautiful tribute. Sorry for your loss; it sounds like you were lucky to know him.

I just wanted you to know that I am thinking of you and your family and that I hope all goes well tonight.

Celebrating one's life and the time you spent together is such a wonderful tribute and says so much about what a wonderful person he must have been. The loss of someone is great, but the joy of having known and lived with that person as a part of your life is even greater.

We can only be with you there in spirit and we are sending you our well wishes and blessings from God for you on this day.

I Am Sorry To Hear Of Your LossX

Lovely tribute and brilliant photo.
My thoughts and prayers are with you and your family.