Betsy's post with a photo of a vintage pink car started me humming "Pink Cadillac" by Bruce.  I then thought of Aretha singing about her Pink Cadillac on the "Freeway of Love" which led me to thinking about Mary Kay Cosmetics and the Power of Pink.  I googled the word "pink" and was astonished to find out it's intrinsically linked to the word "Cadillac".  Thus, my TT is all about pink Cadillacs.

When I was a little girl, my fashionable grandmother worked for Bullocks Wilshire and later Hinshaws as head buyer in couture.  She always drove a pink Cadillac.  She bought a new one every few years.  So chic.

A '59 Caddy was the first car a high school friend of mine could afford.  Unfortunately for him, it was pink which is why he could afford it!  He was teased mercilessly but that car is probably the best remembered of  all our cars today.  I'm told he still misses it. 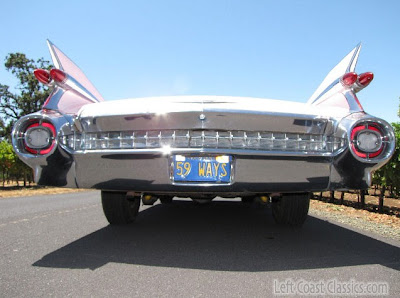 Aretha is the first one to come to mind when I hear the words "pink Cadillac".  I think it's just because I love Aretha.

But let's face it, NOBODY ROCKS IT LIKE THE BOSS!  I saw this tour @ Hampton Roads in 1984.  He was so friggin' hot.  It still makes me fan myself.  Watch this video and you'll know why.

Mary Kay Ash, founder of Mary Kay Cosmetics, rewards her top producers with a Cadillac painted the iconic Mary Kay pink.  Ironically, this brief bio on the life of Mary Kay is done in black & white with just a bit of pink tinting where required.

Let's not leave out Elvis. According to Wikipedia, Elvis bought his first Cadillac, a 1954 model spray painted pink.


On July 5, 1955, Elvis purchased a new Cadillac Fleetwood Series 60 in blue with a black roof. Having mentioned a Pink Cadillac in the song Baby, Let's Play House, the first song recorded by Elvis to appear on a national chart which made #5 on the Billboard Country Singles chart in July 1955;[1] Elvis had the car repainted by Art, a neighbour on Lamar Street. Art designed a customised pink colour for Elvis which he named "Elvis Rose," but the car kept its black roof. Once the car was finished Elvis gave it to his mother Gladys as a gift.

According to another site, the roof was repainted white after a traffic accident in Texarkana. 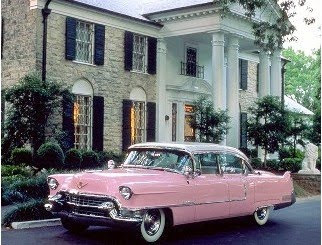 The famous pink Cadillac in front of Graceland
I'm postin' early.  It's Cinco de Mayo and as a self-respecting native Californian,  I'll be out among 'em.
Posted by California Girl at 4:01 PM

have a wonderful cinco de mayo! cool stuff on the caddys...i think they are cool pink or otherwise...and the BOSS does bring the house down!

Happy Cinco de mayo and happy TT! Mary Kay is not exactly huge here in the UK, but I did spot a bright pink MK car on my way to work this morning. Unfortunately it wasn't a cadillac.

Great shot of cadillac in front of Graceland!!!!
I thought of Mary Kay, when pink topic came up!!! She is famous for pink in my book!

BTW, yes, Evan was giving me "the look" to put the camera away! LOL! Very observant of you.

That is one GORGEOUS car! What a bunch of fun stories about pink Cadillacs. I had a pink car once, but it wasn't a Caddy.

Loved this tribute to pink cadillacs. Bruce? After one of his concerts the world just looks different. Hope you had a great Cinco de Mayo. Happy TT.

I had forgotten about those pink Mary Kay cars! Love that Caddy in the last pic.

Hot or not, Bruce looks very 80s in that with the pink. Now I cannot condone Pink except on the cadillacs...

wonderful pinky post! Glad I could help inspire you! haha.
Love the pink caddy...and hey, Barbie drives one, too!

mine is up..
I appreciate your input!

When I drive to see my eye doctor I pass by a house that has one of those Mary Kay Pink Cadillacs parked in front of it. I have heard you really have to sell a lot to get one of those. I have never tried any of her products and cannot say anything about them. But pink Cadillacs definitely make a statement about the person driving them. Somehow they just look so cool.

Happy Cinco de Mayo to you. Being of Mexican descent I am not sure why I never celebrate it. But then I barely celebrate any holiday so it is nothing new. But I do celebrate the Fourth of July, that was a big holiday in our family. Thanksgiving is my favorite holiday of all because I always want to give thanks for being able to be an American. I think I am gonna go make me some tacos and enchiladas for dinner. Yummy, I love eating Mexican food. And if you ever get to try Tres Leches Cake then you will know that you are in cake heaven.

My post for Pink, close to my heart, is up here.

Love it! LOVE it! Hard to pick a fave here ( song or car ). Happy belated TT and Cinco de Mayo :)