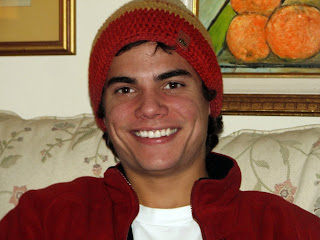 Bryan, my wonderful first born son, went to see Bob Dylan in concert for the first time Tuesday night and he was blown away.  He excitedly called his father the next evening to tell him it was...

"...one of the best experiences of  my life" and he "couldn't believe he (Dylan) was real."

He went, in part, because of his father's undying admiration for Dylan.  He wasn't sure if he'd like the music or his singing but came away with an appreciation for all, particularly his musicianship.  He told my husband

"I really wished you were there but I felt like you really were there through me."  My husband was thrilled.

Bryan is a self taught guitarist and he's very good.  He bought a second hand guitar his senior year in high school and began to learn via computer programs on the internet.  By graduation, he was so into it, we bought him a week's stay at an acoustic music camp on Lake Winnepesaukee where he ate, slept and learned the ropes from hundreds of devoted bluegrass musicians from around the world.

Since then, he has taught himself electric guitar and now plays in a group in the city where he lives and goes to college.  He sometimes performs solo, singing and accompanying himself on his acoustic guitar.  When my father died two years ago, he left his harmonicas to my sons.  Bryan began teaching himself harmonica listening to Dylan and Stevie Wonder.  He made a harmonica holder out of a coat hangar, then broke down and bought a professional one.

My husband and I have surrounded the boys with music, mostly the rock n' roll we grew up with.  They  appreciate music from our era and have an eclectic selection on their ipods.  I am proud of my son's courage to get up there and perform.  Takes guts and a certain amount of confidence which I certainly don't have!

His favorite song from the live concert the other night, "To Ramona".

Posted by California Girl at 2:43 PM

Kudos to your very talented and soulful son!

Wow! That was fast. I didn't expect anyone to be on right now...altho' I don't know why not. Did the new one post to your site or to Blogger?

nice. so cool to see kids take up arts and to be able to share a small peice of that with them. great job mom (and dad of course).

Thank you Brian. He's interested in everything and it's wonderful to watch or, in this case, hear about his discoveries. He's my beautiful first born.

I understand you're proud of him ;) I'm a Dylan-fan, too. Recently bought his new album "Together through life"

He's a good looking boy too! My son is also musical. He's a drummer but has an aptitude for other instruments and loves it. He's only truly happy on stage bless him, not that it happens a lot. I've never been a huge fan of Dylan but his longevity in the business deserves respect, he's definitely left his mark. Have a great weekend.

Very awesome! He's cute too. Am I allowed to say that? If not then let's just forget this every happened. =)

I wish that I could do what your son can do!

Well, my son could probably kick his butt in World of Warcraft.

My first born loves Dylan, too, but he's a lot older...34. He has always been into classic rock. Dylan, Clapton and Springsteen are his music heroes. Isn't it amazing the way successive generations become enthralled with their music? It makes today's "rock" music pale in comparison.

I forgot to say that it is wonderful that your son is a self-taught musician...they're usually the most soulful ones.

A BobCat Is Born.

I have to tell you that if I could have any talent/gift in the world, it would be to belt out a soulful song while accompanying myself on guitar! Oh, how wonderful for Bryan to be so gifted. And, how it must warm your heart for him to enjoy his gift.

fun times, for sure! ....and what a handsome young man!

you sound very proud of him

So nice that your son loves to play music. Dylan is a good classic role model for musicians. I wish that you would record some of his stuff and post it. I'd love to hear it!

DT: how is the new Dylan album? I suppose that's why he's touring?

Baino: whether or not you enjoy Dylan's voice, his contribution to folk and rock are undeniable. The poetry of his work from the Sixties and early Seventies is genius prolific.

IQ: He is cute! Say it all you want! He has a smile that takes you in.

Megan: I'm guessing that is a video game? Thank God we went through that stage quickly. They drove me crazy!

Susan: He is rather soulful. He is writing his own music. No verse that I'm aware of, just the tunes.

Tanna: my husband shares that wish. He would so like to have had a singing voice. He doesn't.

Cole: We sure did. xoxoxo

Lettuce: I am. I truly am proud of him. He's becoming his own person and I like that person
a lot.

Marguerite: He's coming hom3 for 3 wks during the Holidays. Perhaps I can record him on my phone & upload to the computer? Oi. I'll have to learn something new.

I saw Dylan twice and loved it. Kudos to your son for being self taught, I'd never have the patience. It's so wonderful to have that gift to make music.

I am glad it was such a big hit for you all.

When our kids share an appreciation of the music that meant something to us, its a special connection. How lovely that he called to let you (and his dad) know how thrilled he was by Dylan.

Kate: My piano teacher, who was also my minister's wife, wouldn't let me improvise. I had a good ear and after hearing a song once or twice, would play it but not according to the music sheet. She totally killed my musical interest.

Abe: it is heartwarming to have your child love what you love but I'm sure you know that.

Deborah: ditto what I said to Abe. He is a terrific kid; loving and expressive.

Also, be sure to enter the giveaway on A CUP OF JO today!!