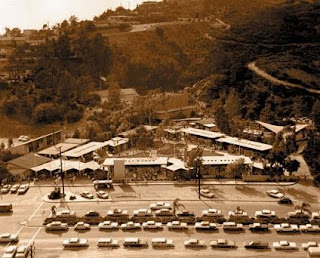 My summer vacations were spent in Laguna Beach, California, one of the most beautiful communities in the world. My grandmother began this two week tradition in the late 1940's and my mother continued it after she and my father married. From the time I was born, we spent two weeks in August in a house on the beach in my favorite small town.


Our trips were like those of many other families. We had our routines: favorite restaurants, motor boat rental to travel round Balboa Island, the Fun Zone, the Pottery Shack, the Jolly Roger restaurant, Victor Hugo restaurant (coat and tie required) and always the Laguna Festival of the Arts.

The Festival of the Arts is a tradition that began in 1932 as a means of drawing attention to this small art colony following the '32 Olympics in Los Angeles. It began as a grass roots event with art exhibitions, plays, parades and its biggest hit, the Living Pictures Show. Created by a local artist and vaudevillian, the Living Pictures Show featured people theatrically made up and costumed, posed within a giant frame, replicating famous paintings. 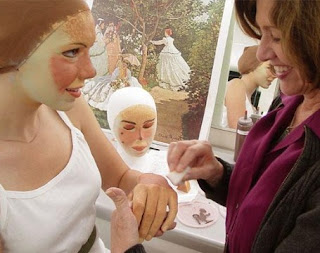 The tradition continued, evolving into the now world famous Pageant of the Masters. Mother took us to the Festival each year, fostering a love for the paintings and sculptures by the local artists. We were encouraged to buy a piece of art each year, many of which were extremely affordable. 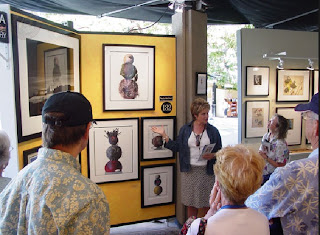 Artistic display at Festival of the Arts 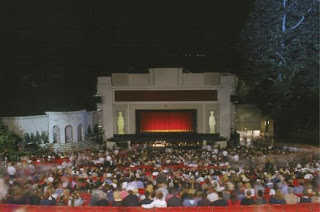 The Pageant itself, showcased by the 1960's in an amphitheatre, was a spectacle of light and dark, color and shadow, a perfect mimicry of great works of art with absolute stillness on the part of the stage participants as the tableaux flow by.

Affordable and available to all, the Festival of the Arts runs from July 8 - August 31, 2009. General admission is only $7.00, a bargain! The Festival is situated on six acres, features over 140 artists who are "rigorously juried" according to their web site "to demonstrate and maintain high aesthetic standards." The 2009 theme is "The Muse" featuring works by Paul Gauguin, Maxfield Parrish, sculptor Anna Hyatt Huntington, Monet, Vermeer, Frida Kahlo, Lalique and so many more. 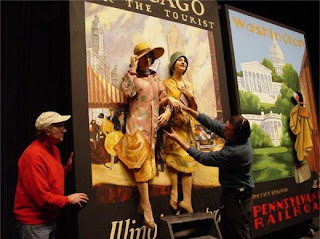 Setting up a living art tableaux


It's impossible to convey the exquisite precision of these recreations. Suffice to say they have to be seen to be understood. My memories are vivid. We went every year. I consider myself lucky. 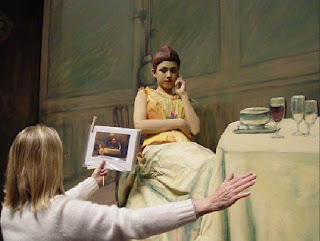 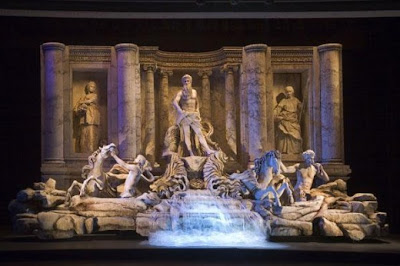 This looks like a fabulous festival! I'd take Laguna Beach any day. Very interesting post and great photos!
I left an award for you on my last post!

I wouldn't have minded buying a bunch of property in Laguna Beach back in the 30s of 40s and having it now...

Interesting and great!!! Thanks for sharing:)

very cool...so much to do, your pics are great especially the living sculptures...way cool...

I absolutely adore these tableaux. With my interest in the Impressionists and their muses I wish I could see this.

What great memories your parents were able to give you. A nice festival, too, to run for such a long time.

Such beautiful photos. I would love to see Laguna Beach any time of the year but especially during this Arts Festival. It looks amazing.

What a great festival! And how lucky are you to live close by? Great post on the theme.

Wow...what a great festival! A two week vacation tradition...that is just wondeful! As far as the festival, I think an Art Festival would be my favorite. I love that living tableaux the best!

Oh, that sounds wonderful! Wish I were close enough to attend.

What great memories you must have of your summers at the beach!

That IS a bargain! Looks like a wonderful place to be.

Awesome on the living art! And Maxfield Parrish is a favourite. And for a price cheaper than a film, to boot! Way more entertaining than a movie :)

Love the living tableaux (there's a theater exercise that uses the same idea) and I love that your parents encouraged you to buy art--what a wonderful way to foster a love for art.

I love art Festivals. The living picures are just gorgeous. Now how did they get those horses to stay so still (kidding)

So very very cool. I'm with Baino; I love the tableau--they've done several of those at my daughter's lower school, and they are amazing.

I wish my family went to festivals like this when I was a child!

i love the pics and that you're playing "center field" my dad and i almost danced to that song at my wedding. and it's the little guy's current fav

Jiminy crickets. My sister LIVES in Laguna, why hasn't she said anything about this?

Awesome, California offers so much artistic outlets, for everyone to enjoy. I love going there to visit my son.

wow these are amazing - I remembering coming across the Victorian passion for these, reading Edith Wharton - I didn't know the art was still alive.

This just looks incredible. How lucky you were to have such experiences. I would love to attend this festival. It's on my list!