My husband sent the followingexcerpt to me this morning. It's from the web site Rotten Tomatoes. The article is about Guillermo del Toro, the director of "Pan's Labyrinth" who was, apparently, offered the director's job for a Disney remake of "The Wind in the Willows".

But one of the projects del Toro spent time on in 2003 was a Disney adaptation of Wind in the Willows that was to mix live action with CG animation, and the director explained why he had to leave the helm. "It was a beautiful book, and then I went to meet with the executives and they said, 'Could you give Toad a skateboard and make him say, 'radical dude' things,' and that's when I said, 'It's been a pleasure...'" 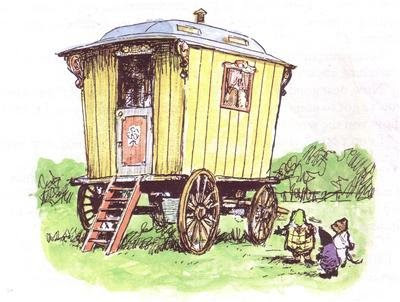 I dunno. I can't see it either. Toad on a damn skateboard? Why don't they just fly him to the moon? Oh, no, that's "Toy Story".

They might as well take Winnie the Pooh and make him a glue sniffer. The hell with honey!

Original illustrations for "The Wind in the Willows" and "Winnie the Pooh" by e.h. shepherd.
Posted by California Girl at 4:12 PM

Those Hollywood producers are either plain old nuts, or they were never exposed to literature when they were young.

Winnie a glue sniffer? What would the bees be doing then?

Maybe it is just my overall immaturity, but every time I hear Winnie the Pooh, I think of mr. Hanky from Southpark! LOL!

yeah. hard to modernize many classics and still get the same feel. don't know that winnie was the one sniffing glue here...maybe the pitch guys and their skateboards...

Were they freakin' out of their minds?!!! Why, why, WHY would they want to go and ruin it like that? To appeal to today's electri-fried brain youngsters? Ugh! Just hand me the book and a cup of tea with honey, please!

I agree and am happy that Mr. Del Toro left the project. I understand that Tim Burton is doing Alice in Wonderland, now that's a movie I want to see.

I think some of these producers have no clue what people read, because they don't read themselves. Thus all the terrible movies not making any money, because they are not worth paying to watch.

We are having an awesome summer in Richmond ~~ thanks for asking :)

Cool weather is always nice in the dog days of summer!!

Hope you are doing well...
I do have some new paintings I did yesterday in my shop. They are more of some deep Fall colors ...
Take care, and talk to you soon!
Laura