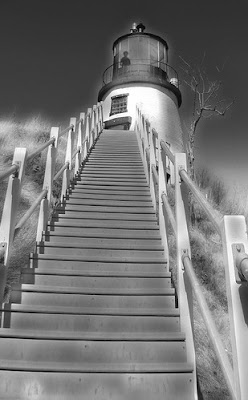 My husband is struggling with the question of what to do about his parents. They are in their eighties, living alone in a large house on several acres of land. They live on social security and a bit of savings and their health is precarious. His suggestion for the past year has been to get a reverse mortgage and use the money to live and stop worrying. His mother refuses to do so The Keeper colescottphotos.com
and this is at the crux of his frustration and fear.

Without going into details, he has a strained relationship with his folks. He has been a very good son, providing hard work, financial advice and emotional support. They are not easy people; too self involved most of their lives. There is no money. They spent it all years ago. His sister hasn't seen them in over a decade. But he has been there for them and now the decline is in full swing and he does not know what to do.

His mother claims she wants to bequeath the house to he and his sister; a nice gesture but not practical or realistic. Sadly, he cannot talk with her about it because she stubbornly refuses or claims she's too weak to discuss. We have talked about moving in with them but I just don't see me doing it. I think it would destroy our marriage.

I feel sorry for my husband because I understand the responsibility and sense of obligation he feels. I went through it with my father in his last years He was so stubborn. It was unbelievable!!!! Dad had money and he wisely gave my brother and I a series of powers of attorney to oversee it if he could not. But he was still a handful. Being 3000 miles away did not help. The year he turned 92, while he was still in fine shape, I found a beautiful level care facility of independent bungalows on an old estate with nine acres of trees. Dad refused to leave his home. He fired every home helper. He drove til he was 95 and my brother took away his keys. He ate little, refusing to spend money at the grocery. At 96, the cantankerous behaviour ceased. He was depressed and too feeble to resist. I was finally able to implement a routine. His last 18 mos were spent with 24/7 care by two loving sisters. He had good food to eat, lots of outings, his daily walk and was clean and happy. It cost $70k annually to take care of him at home but I had power of attorney and I felt it was money well spent.

My in laws have no such savings or hopes of this lifestyle. They refuse to give us power of attorney or any legal oversight. Without that, I am not sure what will happen. Everyone faces this. Few of us have the luxury to hire care for family members. If parents knew what a burden they place on us by refusing to give up control, would they still do it?
Posted by California Girl at 7:46 AM

And, so, I consider my own exit strategy. I've seen stubborn up close and personal. It is not pretty. One of my greatest concerns is that I not become that burden to my own children.

Recently, in a very nice neighborhood close to here, an eighty plus year old couple left on their own terms. Some consider that a sin... I'm not so sure.

Difficult place. Difficult decisions. I feel for you both.

ummm...you find yourself in a tough position, making tough decisions. don't have a whole lot of wisdom to share here other than my hopes and prayers.

hope that i find myself prepared when my time comes for my children to take care of me, but i'll probably turn into a crotchity old man...

I'm sorry you have to deal with such problems. I'm sorry anyone has to, really. I also wonder what will happen to me at old age. I hope I won't be a burden to my kids, but I'm not sure I can prevent that from happening. Is anyone?

I understand your frustration. There is so little one can do until people at least acknowledge that they do need help.

For my own part, I'm determined *now* to try and avoid traps I've seen both my own parents and other elderly people get caught in; but who knows if 70+ me will still be able to think the same thoughts as 50+ me...?

Tanna, Brian, Minka & DT: The most common thread is wondering what we will be like when it comes our time. A big consideration is to be more flexible and considerate of our families. Just an attitude adjustment would help! I have no desire to become caregivers to my in-laws. They are very difficult people. Of course, as they fail, well, that may become another story.

I really sympathize with your husband. I just came back from a weekend with my parents who are struggling. I am the only child. My dad has dementia and my mom is having to pretty much run everything. The hardest part is his stubborness to try to do things he is not able to do (drive, mow the lawn, fix things etc). These things were the heart of him so it is a bitter pill to swallow. It's hard to watch them suffer this way.
My heart goes out to you and him.

Sometimes old folks will do just what they like and it's hard to change their minds or even live with them.
I hope I will not be a big burden to anyone but circumstances will dictate.

My husband is at your same crossroads...word for word. I never faced it because my parents chose to end their own lives @ 64. While devestating at the time (and for the next 20 yrs trying to understand it) I now appreciate what they chose....It's hell either way and I hope you both come to the terms of accepting this challange.

This post is remarkable for the amount it covers. I have a friend who went through some of this with her in-laws, including a middle-of-the-night call because her husband's Dad had fallen down outside, crawled to the phone, and asked that they come over - the son called 911. Some months later he agreed to go into a care facility, not neglecting to announce that his money would be going to the Church (presumably because the Church hadn't suggested that he go into a care facility). This is so hard. My parents live on their own, my father is a wonder at this point. I may need to move in eventually which scares me as my relationship with my mother is not the best.

DV: pretty soon you will have to make some decisions because all options will be gone.

Keats: We all certainly hope this. I drive my sons crazy now!

Holly: I am shocked and saddened by your revelation yet gratified you choose to share with the rest of us. This is one terrible extreme and it has to be God awful for you. I hope, in the twenty year interim, you've come to terms as best you can and are healed as much as possible. My prayers are with you.

AS: It should not be a lonely road. There are so many people dealing with this now and so many more hotlines and outreach groups to whom you and your friend can turn. My dad fell many times and one neighbor called social services. He wasn't demented but refused to have accompaniement on his walks. I have lived on the opposite coast for so long...I remember that call from the neighbor and how she berated me.

Dad finally became so depressed and just helpless enough he had to have someone in the house. Once he did, the dependency grew. He was a lamb his last year and that is saying ALOT.

thank you for writing this very important fact about life today...I, just yesterday, was trying to " convince" my 81 yr old mother perhaps to sell her home and consider assisted living somewhere closeby as, since her colon surgery, she cannot walk nor take care of personal needs...she is adamantly against it and either gets angry or too tired to discuss anything! I am so frustrated, I know exactly how you feel and what you are talking about....

Linda: I hear you. You will, sooner or later, have to make some decisions against her will. If she is unable to care for herself, Social Services may get involved whether you want them to or not. Depending on her/your financial status, you may be able to afford a nice level care facility. They are much less like prisons now. I work in advertising and am beginning to see nicer ones all the time. Of course, they are not inexpensive. If she has assets that can be sold, best to find one she can afford and get her in while she's independent. they are much less expensive that way. Of course, if she's like my father...well. You'll have to wait til she no longer can make decisions on her own.