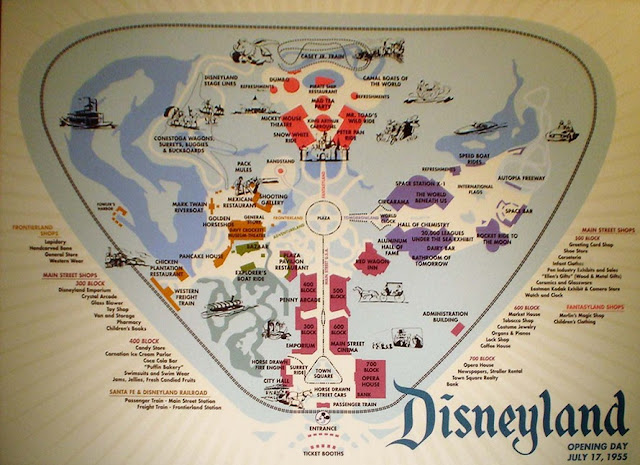 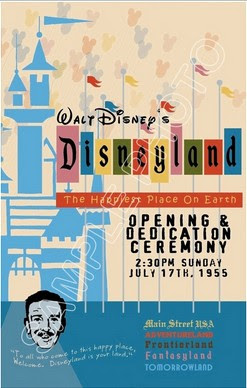 This brings back memories from the "happiest place on earth" as Walt Disney liked to call his Magic Kingdom.  Disneyland opened in Anaheim, CA on this day 58 years ago.  There had never before been anything quite like it. Walt kept it simple:  Main Street USA, Fantasyland, Adventureland, Tomorrowland.

What kid couldn't remember that?

I first visited the park within a year of its opening.  My father worked in the broadcast industry;  the original ABC studios were across the street from his office on Hollywood & Vine.  ABC helped finance the park.  One of their early hits was "Disneyland", later to become "Walt Disney's Wonderful World of Color" in 1959.  At that time, ABC was a fledgling network taking on the mighty CBS & NBC, competing for advertisers, viewers and loyal media buyers. As a national broadcast rep, Dad helped sell advertising onto the network working with buyers in LA, NY, Chicago, etc.    He was regularly spiffed with tickets to Disneyland and we went every year from the time it opened.  He'd take us out of school.  He hated crowds and waiting in line. 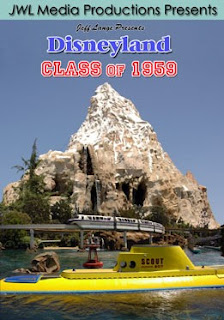 As a kid, one of my favorite rides was the Autopia.
We'd pretend we were real drivers in real cars.  We could steer,
we could brake, we could bump the car ahead of us.   The track was enclosed and safe but we always felt we had control.  It was amazing! 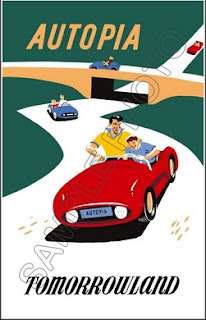 My childhood and teen years are wrapped up with Disneyland.  After I was old enough to go without the folks, a gang of us would go to ride the attractions during the day and dance at night.  They had dancing pavilions and it was fun.   They also had strict dress codes.  Boys had to tuck their shirts in. No mini skirts on girls.  We could wear shorts during the day but if we wore a skirt or dress it had to come to the middle of the knee.  Of course, we thought that was stupid.

Many Southern California high schools held their Grad Nights at Disneyland, including ours. The park would close to the public at dusk and reopen around 8pm as busloads of graduating high school teens arrived, unloaded and took over til dawn.  It was unbelievable.  I went to three grad nights with three graduating boyfriends. Lucky me!

When our boys were young and we'd just moved back to San Diego from Virginia, we took them to Disneyland.  It's a rite of passage.  By that time, the evil emperor, Michael Eisner, was CEO.  Roy Disney was off the board.  Walt was long dead.  Eisner turned Disneyland into a commercial money machine with product lines galore from every conceivable movie made.  He retired the great artists long considered filmdom's finest animators, cheapening the resulting product.  Our boys loved it, of course.  My husband and I found the park a bit more sterile, not as tidy and disappointing.  Was it the magic of our youth we no longer saw?  Or was it simply the new corporate "look" too often duplicated?  I vote the latter.

People talk about Disney World in Florida.  I've never been.  My children are grown now and the likelihood of going to DW is slim.   For me, it's Disneyland in Anaheim that will always hold a special place in my heart. 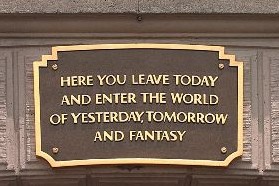 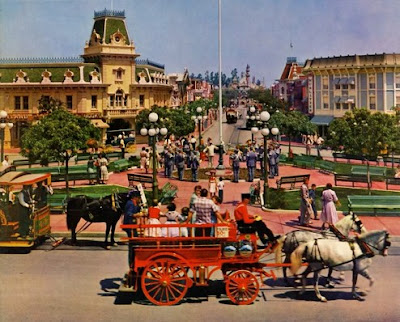 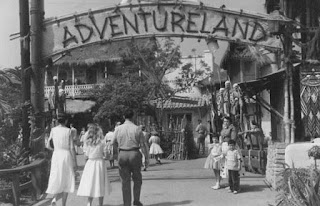 Posted by California Girl at 12:08 PM

smiles...we went to the one in florida as kids...hoping to take the boys this year...maybe in the fall...disney is a very cool place...when i worked at citi they closed the park for us one night at universal...was very cool

reminiscing does make memories in the mirror look better.
I had a similar place, Riverview. Unlike Disneyland, Riverview was torn down so it didn't change for me.

I went to Disney World once, for one day only. Not really able to see everything!

Thanks for sharing your happy memories. Growing up in Kansas, I longed to visit Disneyland. I finally made it when I was 27. We took our son there when I was pregnant with The Hurricane. We went back two or three more times, and we went to Disney World twice, if I recall correctly. I liked Disneyland better. DW is so large it's overwhelming.

I went to the one in Anaheim when I was a teenager. I remember Mr. Toad's Wild Ride and the dreaded It's A Small World. Talk about an earworm! Uh-oh, I think it just woke up... :-)

DJan, Thanks for mentioning "It's A Small World". Ear worm indeef. The only person I knew who liked that ride was my mother.

I went to Disneyland many times ni 1966 and 1967 on Navy days..for Navy personnel and their dates, it was a blast. Commercial but so much fun, we ate at a nice place for Navy personnel and went to all the rides, had Carnation Ice cream cones and so much food, one could barely go on the many rides..I loved it! We took our only child in 1981 & 1982 & 1983 it had changed so much I hardly recognized it but it was still fun, now Sea World was so different in San Diego, I remember a roommate working there and got in for free, there was basically not too much, when we went back in 1981 and 1987 (I won a huge trip hotel, 2 days at Sea World) it was a huge difference and a blast, I think Disneyland is not the happiest place on the earth and Sea World is better!!!!!!!!!!!!!

When I was at Cal Arts (California Institute of the Arts) one of the classes meant to bridge the old with the new - was the Disney Seminar. Animators and other artists from Disney's classic period would talk to us about their work. Lots of cool stories about Fantasia, etc.

I was at DL a few years ago, it was so crowded it was more like survival than fun.

That must have been something. They were the great ones, producing the magnificent work which, in my opinion, marked Disney's heyday. CIA is the school Disney founded,correct? Orginally known as the Otis Art Institute?

No, not Otis, Chouinard Art was the Disney acquisition that evolved into CalArts. Walt wanted a mixed of all the fine arts with commercial type arts. At times the tension of the two different worlds was tense but if a student was talented and passionate enough the place was the best experience possible.

Oh right, Chouinard. I actually remember the rivalry. The father of one of my closest h.s. friends taught at Art Center from it's inception. There was much back & forth as to which was the "best". The old school snobs looked down their noses at Chouinard as "commercial", if I recall correctly. My father wanted to send me there. I gave my Art Major in Jr. College. I hated being graded for my work. I'm sorry I didn't go to art school now. Ah well.

GREAT post! Talk about bringing back memories...
I also went there shortly after it opened. It was September 22, 1955. My dad took me there for my birthday.

I have no idea how many times I've been there. I learned early, to never go during the summer though.