Reprise: The Love of My Life

My cat has been gone three years and three months but I miss her as if she just died. I wrote this a month after she died and want to again share my love. 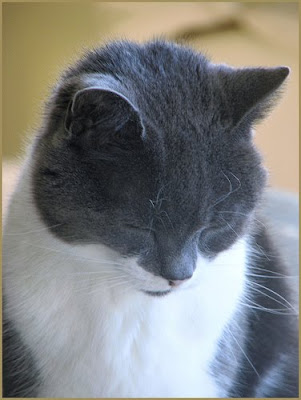 One of the great loves of my life has died. It's not my husband or child or an old boyfriend or similar...it's my beautiful, adored cat, Maggie.

It may sound funny to describe a cat in such grandiose terms but, in many ways, she was.  I loved her unconditionally.  I forgave everything:  her almost daily habit of serial killing small animals; her constant hair shed; her vomiting the remnants of the small animals she'd devour; her staying out all night in summer causing my husband, sons and me no end of worry.  Maggie did not love me best.  Oh no.  She adored my husband and sons. She liked menfolk.  My eldest son was her early favorite.  They had a very companionable relationship til he left for college. She then became enamored of my husband whose exceedingly warm body was well suited to her needs.  She would practically sleep on top of him even though he did not encourage her.  I, on the other hand, wanted her next to me always but I was always her last resort. 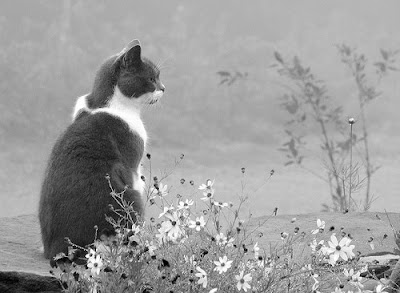 Maggie was a dainty, tiny cat.  She looked like a kitten all her life, never weighing over 6 lbs.  She had perfect confirmation and markings.  The boys and my husband brought her home in 1999 after a visit to a local animal shelter where they also brought home a female dog named Zoe.  Maggie was about 18 mos old at the time though she looked like a kitten.  She had tremendous confidence and a sense of herself which attracted the menfolk immediately.

Early on, we decided not to limit her environment to the indoors. Our property abutted a national forest. We had regular visits from red fox, black bear, moose, wild turkey, the occasional bobcat and weasel. It was a calculated risk.   Maggie had energy, curiosity, aggressiveness and exceptional hunting ability.  For ten years, we waited for the other shoe to drop. 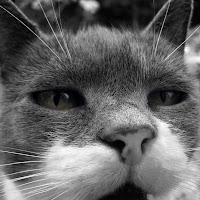 She had two close calls that we know of.  Early on, while driving down the driveway to school, my son and I saw Maggie, back arched and ready to fight two red foxes.  They had her cornered at the junction of our driveway & our neighbors' easement driveway.  Zoe, our dog, Maggie's companion from the animal shelter, jumped out the car window and gave chase to the foxes who were loath to leave the tiny morsel.  My son jumped out to scoop her up and Maggie was saved.


The  second close call was Labor Day 2009.  I found her curled up in a ball on the porch, bleeding, with teethmarks, lacerations and damage all over her body.  We rushed her to the vet and waited anxiously overnight  for the results.  $800 later, she was thriving with numerous stitchings and salve.  The doc ordered bed rest.We kept close watch for the next week and she rallied beautifully.  I breathed a sigh of relief and
thanked God for saving my baby. 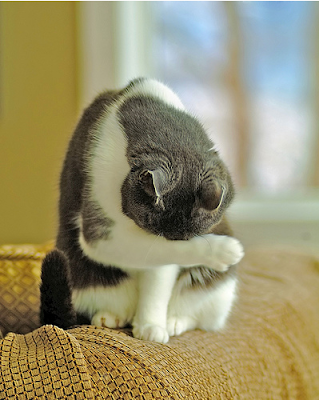 Then, on December 10th, three weeks after moving out of the family home we shared and the only home she'd known, my son awoke to find her staggering and listless on the floor of his room after she'd fallen off his bed.  He alerted us to her distress and we observed her for a few moments before finding an emergency vet hospital  open.  It was 8AM.  She couldn't walk right.  She wouldn't look at us.  She didn't want to be touched.  She was dying before our eyes.  Again, we rushed her to the vet.  They xrayed her, they hydrated her, they took blood samples.  She had a seizure and they sedated her to quell the tremors.  They told us they'd monitor her progress.  When we walked out the door of the vet hospital, I began to sob.  I almost collapsed in the parking lot and my husband and son helped me to the car. 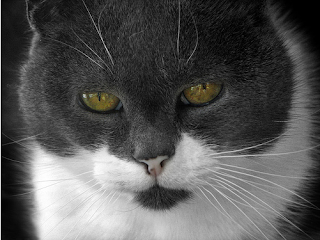 We drove around a while.  I couldn't stop crying.  I didn't go to work.  We returned to the house we now share with my MIL.  My son was quiet and scared.  At 12 noon my cell phone rang.  I answered.  It was the doctor.  Maggie hadn't made it.  The vet did not know why.  I speculated poison.  The vet speculated a "toxin" or a brain tumor that might have grown too large and suddenly killed her.  The vets don't screen for toxins so we'll never know.  An autopsy was out of the question.

I took the news calmly.  I had known when I said "good bye" to her at the vets and walked out that door full of more grief than I'd felt in years.  But my husband and son were stunned.  My son bent over double, holding his head, crying as though his heart would break.  My husband just couldn't believe it.  Our Maggie was gone.  We'd watched tv in bed the night before and she'd curled & cooed & purred to us as she accepted our pets, strokes and love.   She'd done her "roly polys" which I called her rolling about on her back.  She was fine.

The worst part of any death is the hole it leaves in your heart; the void that will never be filled.  We move on, we adapt and we finally accept.  But we never forget and we never quite let go. 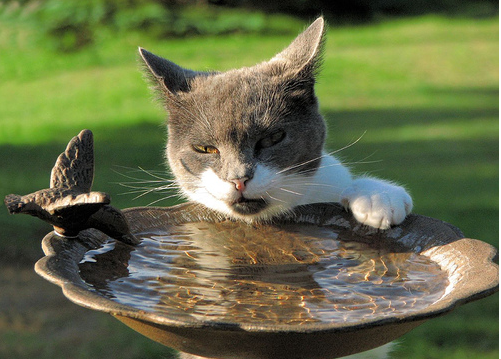 Posted by California Girl at 5:05 PM

You have broken my heart with this story about Maggie. I too know the pain of loss that just won't let you move on. Even though it hurts, that pain is there because of our huge love for our furry creatures. I'm so sorry for your loss. I hope you will think one day of allowing yourself to love again... even knowing that this will be the outcome, it's worth it.

I'm sorry to be able to say that I know exactly how that kind of loss feels.

Oh, she was beautiful!! I certainly feel your pain. I cried for three days when my first cat died. He was 18 years old...such a long time to bond with a pet...and the very first pet of my life since my parents wouldn't allow pets. You have such lovely photos of her...and wonderful memories, too! Thanks for sharing her story!

Those whom we love will always be with us. Your beautiful memories of Maggie and the wonderful photographs tugged at my heart. Thank you.

"The worst part of any death is the hole it leaves in your heart; the void that will never be filled. We move on, we adapt and we finally accept. But we never forget and we never quite let go."

Hi! C.G...I'm so very sorry, to read about the loss Of your beloved; Maggie...She seemed like the ultimate femme-fatale [Oops! I meant feline-fatale]...I will let you pet me until no man in the household is around...Ha,ha!

She was very beautiful and what a personality shining through even in the photographs.

Deedee, I absolutely love you for this, thanks. CG

So sad. Your story really got to me. About three years ago, we lost our long time cat. He was my buddy and whenever we were around each other, we were attached. Our beloved pets seem to have access to a part of our hearts that humans don't. It hurts when we lose them. There isn't a day goes by that I don't think about my friend... It just hit me that I think Morgan Freeman said that exact line in the Shawshank Redemption when talking about his friend Andy who had escaped from the prison.