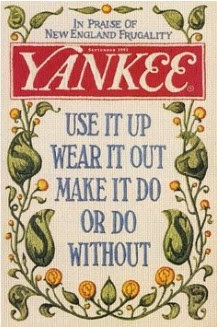 New England frugality is not a myth.  It's the real deal.  I was raised that way by a Mid-Westerner whose roots originated in Revolutionary New England.  This distinctive trait must explain why Dad liked to "recycle" before it was called that.  He'd re-use large mailers by sticking a label over the old address with a new address & putting a postage label stamp over the old postage.  If he could unstick a used stamp without USPS indicia, he'd reuse it.
In those days, soda came in 7 or 8 oz glass bottles.  It was common practice to save the bottles and return to the store for a refund.  Plastic, the seminal one word response about the future from "The Graduate", was not much of a presence in the 1960s.
We had a compost pile in the "way back" ( that area of back yard nobody could see as it was screened by tall bushes.)  The compost pile began after incinerators were outlawed in the City of Los Angeles.  He saved foil and reused.  He collected rainwater under the dripping eaves of our home.  No idea what he did with it.   He saved stale bread to feed the birds.  He wore ancient wool socks, preferring to have them darned over buying a new pair.  My mother was NOT into that.   He was tight as a tick.  Thank goodness my mother oversaw the bills and the books.  She was just the opposite which balanced things nicely for us kids.  I'm becoming a chip off the old block.  I won't get a smart phone, I find myself saving foil.  I started a compost pile.  I save my stale bread to make bread crumbs for cooking.
Do you think it's genetic?
Posted by California Girl at 3:00 PM

smiles...we used to save the glass bottles and return them to the grocer...and go find them as well to do the same...we recycle as well...anything organic, such as rinds, peeling or such i leave out for the deer...

Brian, either it's genetic or just common sense.

Historic Quaker and Shaker values, The Agricultural Era, The Great Depression, WWII ... all have had influence on who we have been, at least between 1900 and 1950. Today, not so much.

Don't think the whole approach would be genetic but I would not be surprised if the tendency to worry more about your future than most might be. I don't save foil but collecting some rainwater and recovering screws, springs and various hardware off of things about to be recycled or thrown out is common around our place.

Dad was a young man during the Depression.

Genetics or not, it is a good thing to be frugal as long as you balance it out with a splurge here and there.

We have a compost pile but with only two of us here most of the time there is not always that much to compost. Although the dogs jump in and eat anything they can find of value so it does kinda defeat the purpose of the thing.

We used to take a wagon and go out and hunt for those used soda bottles then take them to the liquor store and trade them in for candy. We would split the money and if we got a quarter each then that was a good haul. For just a quarter we would walk out of there with a fair amount of candy. I am not even sure if a quarter would buy anything more than a few pieces of bubble gum today.

But it did teach us to work for what we got and not to think it should all be given to you.

Janie, if it makes you feel any better, I wanted to "pull a Medea" on my sons when they were teenagers. I was either in tears or in rage half the time. Thank God we all lived through it.

Hi Mrsupole! So nice to hear from you. Our older dog gets into the compost pile as well and the result has been she now has to wear diapers at night. I've also abandoned the compost pile. I guess next year I'll try a compost bin, as originally suggested by my younger son.

Hope you are doing well and coming to grips with the loss of your mother.

Your Dad and mine sound like brothers. He's also a New Englander as was I until an adult. I recognize the tendencies you described and my Dad added buying only day old bread, renovating old bikes for the next child in line and constant admonitions to turn off lights and appliances not in use. Time doing fun, free activities were our rewards rather than toys or things. Most Christmas presents were homemade. Not a bad way to live actually!

Grandmother: I forgot about "Turn off the lights!" admonitions. That was constant. He didn't like running the sprinklers either. Of course, we lived in SoCal and my mother had beautiful gardens loaded with rose bushes and we had to water them a lot. Drove him crazy.