How New Englanders Act Out West 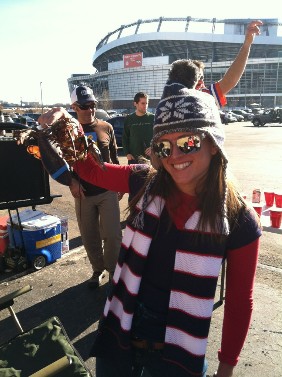 After living anywhere for any length of time, in this case New England for 14 years, I love to share the idiosyncrasies of each region, warts and all.  You saw a typical New England sports fan peculiarity in this post.
Today is crucial for New England sports fans who, by the way, are RABID.  If the New England Patriots defeat the Denver Broncos aka "Orange Crush", they will clinch the AFC Eastern division.
As you can see, rabid Patriot fans are tailgating at Mile High Stadium.  This little lady (l.) is holding up an about-to-be-cooked Maine lobster...or, as they call 'em here, "Lobstah".    Now THAT is tailgate cuisine at its best.
I have no love lost for the Broncos.  This California girl spent many many years living in San Diego, the fiercest rival the Broncos have.   I hope Tom Brady kicks Tim Tebows' butt which, for more than team loyalty reasons is a priority.  Tebow, an avowed pro-lifer at the tender age of 24 is vocal about his position on pro-life. Sorry but, I just don't think men's opinion on this subject should count.  They don't carry the baby, deliver the baby and many never take much responsibility for the baby.  Yes, this is a gross generalization and there are plenty of men who take total responsibility and are terrific fathers but... this kid isn't a father, he isn't married and he's a Denver Bronco.  But, I digress. 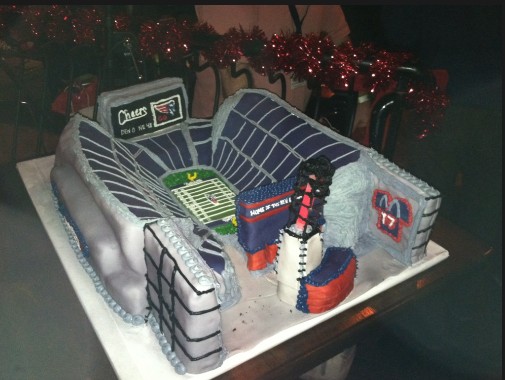 I assume this is a cake.  I cut and pasted these photos from the Twitter site, realpatriots.  They were posting lots of twit.com photos.  The descriptions are not always enlightening. 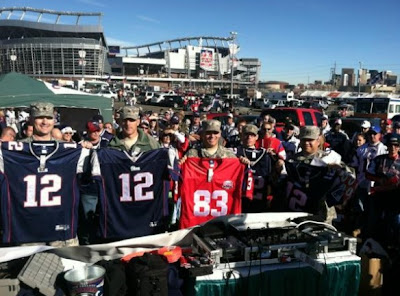 This photo needs no explanation.  Our troops in Iraq came home today.  Did you know that?  The last troops left to come home today.  10 years, 4500 casualties later.  Our men in uniform are celebrating at the season's biggest game of the year.
God bless them. 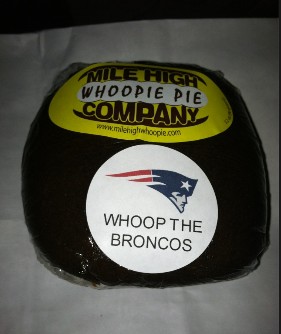 Whoopie pies are HUGE in New England.  dThis appears to be an actual whoopie pie with a stirring slogan on it to "whoop the Broncos".  Why it would be made by the Mile High Whoopie Pie Company, I'll never know.
Enjoy the game.  It's now 3rd qrtr and the score is 27-16.  This writer may just have predicted the final score correctly.  Hope he had some money down.

Posted by California Girl at 6:32 PM

Some of us New Englanders do pronounce our Rs.

smiles....watched a little of it...mine are on tomorrow and would much rather see NE lose to have a shot at home field...and the ravens of course...glad to see the troops come home though...

You got your wish! Congratulations!!!! Yayy!

I totally agree concerning Tebow ... his pro-life values are contemptable.  Historically it's been privileged old white guys in congress deciding what women can or can't do.  With Tebow, we now have an ignorant young privileged white guy using his fame and popularity (?) to push his caveman values.

I don't understand Tebow mania.  It is creeping me the hell out.  I'm almost missing Favre right now.  And that's saying something.

I mean no disrespect Bets.  I understand your ProLife choice and that of other women.  I think it's women who should decide, not men.   I believe women should have control over their bodies (as long as it isn't a method of birth control.)  Do I understand the painful crucial no-turning-back implications of such a decision?  I do.

The tweets were flyin' last night as were the FB chats.  So, we're in for another 4 weeks of football, at least.

Assuming you're a Colts fan.  I heard on the tv sports news this AM that Peyton will not play the rest of the year.  That isn't good.  He's awesome.

Yes, when you're saying words that end in "a"...like "Claudi-er", words like that.

"Claudier?" That's just insulting. I don't do that.

Wow, that it some cake! And those whoopie pies look good! Happy Holidays to you and your family!