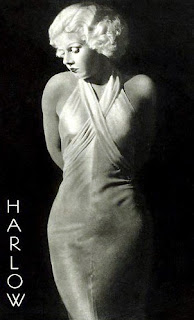 I just updated my Shelfari book shelves which, if you're curious about my reading habits, you can see towards the bottom of this blog, right side.
While on the glorious vacation of my last post, I read two books:  "The Lost  Symbol" by Dan Brown and "Harlow" by Irving Shulman.  The Dan Brown book was a fun read, the perfect beach book.  But I zipped through it and needed something new.  I found a 40 year old paperback copy of a book I'd read in junior high, "Harlow". It was an original paperback and I wondered if I had remembered her story with any reliability.  I had but I hadn't.  I was now reading about a woman from the perspective of a woman.  I'd admired her as a child, loved her movies which I watched on tv with my mother.  I was intrigued by her tragic marriage, unfulfilled love affair with William Powell of "The Thin Man" fame and her unexpected, some say "preventable" early death. 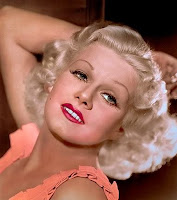 Jean Harlow has always held my fascination.  She was beautiful, sassy, sexy and impossibly blonde. The terms "blonde bombshell" and "sex goddess" were coined for Jean.   She started the "platinum blonde" craze because her hair, described as baby fine, and blonde had a whiteness to it. She may have enhanced it onscreen via the bottle but she was always towheaded.  Thousands of women dyed their hair platinum blonde to emulate her.


I loved her speech mannerisms and hard edged dialect.  She began her career playing scandalous parts.   Her characters were typically girls from blue collar backgrounds who, through sex, brains and/or hard work managed to make their way in the world of men, show business, the white collar environment, even the jungle.  ﻿My favorite examples:   "Wife Vs Secretary", "Dinner at Eight", "Red Dust", "Bombshell", "Red Headed Woman". 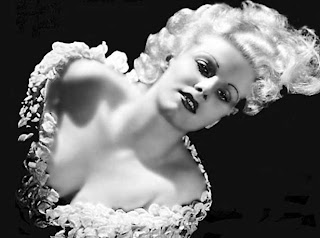 I love her comedy, her sarcasm, her wit.  She would stand toe to toe with the biggest stars in the business and be on equal footing.  Over the years, her acting has been derided but I think she's terrific.

Harlow was very photogenic with lovely cheekbones, a dimpled chin, a kewpie doll mouth and that shimmering hair which demands your attention.  In the 1930s, studio photographers were the best in the business.  She left a large library of fabulous images.

My favorite Jean Harlow movie is "Dinner at Eight".  It's considered a comedy classic.  Written for the stage by George S. Kaufman and Edna Ferber, it was adapted to the screen in 1933.  Here's the most famous clip from this oft quoted film.

The following video is a bit long but contains lovely photographs of a true screen legend who was just getting started.  Jean Harlow died of renal failure in 1937.  She was 26.

Posted by California Girl at 4:29 PM

she certainly was a beautiful lady...and i enjoyed the lost symbol

Hi! C.G...
This is a great post in every way possible...very informative, and pictorial.(In other words, nice photographs.)
Thanks, for sharing the videos too!
DeeDee ;-D
[Postscript:I'am just discovering actress Jean Harlow, through another classic film fan...Who admire her greatly...By the way, a new book was just released about her life this year on the centennial Of her birth.]
Amazon.com

Brian: One of a kind. If you don't watch any other movie, see "Dinner at Eight". It stands by itself.

DeeDee: I am an old movie fan and she was always a favorite. I wish there was a decent movie channel that played a wider variety of old black & whites. So many great films.

Jean Harlow has been a favorite of mine since my boyhood in the 1960s. From the age of eleven or so, I could stay up as late as I wanted on any night that wasn't a "school night." I watched tons of classic films on late-night TV. Dinner at Eight has always been my favorite Harlow film as well. I recognized the first clip before I even bothered to play it! Thanks for a great post!

She was pretty awesome. I have a wonderful collection of old books that my Aunt collected years ago with 40's and 50's screen legends in them. Great fun to flick through and Jean of course features large! Maybe I should go platinum as a way of 'fading to grey' now there's a thought, then again. . . .

You have piqued my interest in watching some of these classics. It is amazing that she was only 26 when she died. The "machines," mentioned in one of the clipsthat would do all those jobs, could possibly have extended her life until she could have had a kidney transplant now...

Fox, Baino, Tanna: I wonder sometimes who will recognize or be interested in the stars from that early era. I have a great love for most as I shared the movies with my mother when tv was using them as daytime "fill" and we only had 3 channels in L.A. At that time, the Thirties was only twenty years in the past. That's like the Eighties now.

I've owned and/or looked through several dozen mags from the 1930s and 1940s, and it's interesting to see who was popular then, as opposed to what names are still recognized now. For every Jean Harlow or Clark Gable, there are a dozen people like Patsy Kelly or Charlie Chase.

Oops. In my haste earlier, I misspelled Charley Chase as Charlie Chase!

I've never done a 'net search for either Charley, so I don't know what you'll find. The link is safe. It's just a story about a writer's confusion resulting because of both.

A different world. It all seems so glamorous now, but those were tough times... great post!