Nowadays, Halloween seems to be more about grownups, their parties and elaborate costumes. But for me, it will always be about my children. 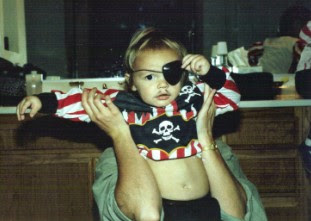 When they were 1 & 2, we dressed them in pirate pajamas, smudged their faces with beards & moutaches and carried them door to door for their first "experience".  They lasted about 45 minutes.  It was the beginning of many happy years to come. 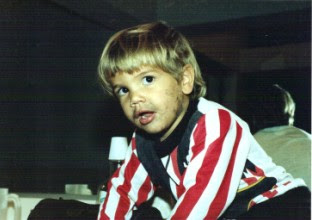 The following year, the pumpkin carving began.  Their father took them to pick out the pumpkins, then sat them on the ground to watch as he carved. 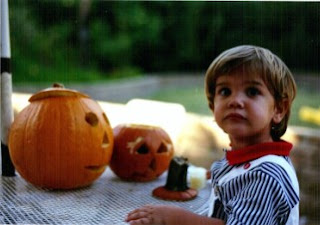 They were charmed, mystified and delighted all at the same time. 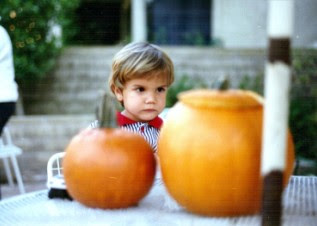 After that, they always had their own pumpkin on which to draw a scary face.  They learned to dig out the seeds, saving them to dry in the oven and, later, feed to the birds.

As they grew, they learned to carve and it was the highlight of the season, after the candy collection of course!  I  decorated the entrance to our home each year using the home made bats, witches, ghosties and black cats cut out of construction paper at school.  I made spider webs of black string which hung from the porch overhang and brushed children's faces.  We had the white fuzzy webs, ghost lights on a string, trees filled with lights and brown paper bags of sand, each with a candle to light the driveway. Carved pumpkins filled our porch.  We played a selection of scary music on the stereo heard up the driveway and into the street.  We lived on a cul de sac in southern California and Halloween was generally warm allowing us to leave the front door open, the electric lights off with only the flicker of candlelight to show the way.

The main event was taking the boys trick or treating.  We'd visit the homes of our neighborhood and a few beyond.  So many people decorated and dressed up for the kids, it was always a surprise and a treat.  We'd take our dog on a leash and the boys' two best friends, a brother and sister, little towheads and cute as buttons.  Dressing the boys was my husbands's task and he approached it with artistry and vigor.  One year he painted the face of one son as a skeleton and the other was a vampire and they were dressed accordingly.  Another year, earlier, they went as Oscar the Grouch and a duck!

So another Halloween approaches and my boys are grown and away.  But my memories are sweet and my heart is full and I wish everyone the kind of Halloween my husband, sons and I were so lucky to enjoy.


Click here for a cute Halloween message from Jacqui Lawson.
Posted by California Girl at 10:38 AM

A beautiful post. This year will be the first year my daughter will understand it and possibly remember it. I'm taking her to a halloween party tomorrow :)

i love the looks on his face in the carving pics! cute pirates! we are taking the boys to a party...a bit safer it seems than going door to door. about 50 families in all joining in to make it all about the kids! happy tt!

I'm totally with you on this ... Ramp down the adult stuff and let the kids have their moment, no matter how silly they are.

Thank You for this theme. Your boys look adorable. Happy Halloween.

"They learned to dig out the seeds, saving them to dry in the oven and, later, feed to the birds."

Pumpkin seeds? Given to the birds? They're too good for 'em! You should have saved them for me!

It makes me happy, too, how much my daughter enjoys Halloween. This piece really resonated for me.

ADORABLE little boys!!
I enjoy the glee and fun my kids have too...

Heh, heh! I'm with SF, those seeds are for human consumption; let the birds find their own seeds!

As an adult with no kids, I'm enjoying my adult celebrations, although those are actually Samhain celebrations rather than Halloween ones. I'm going to a Dumb Supper and memorial Saturday night, which sounds like there might be some dancing to a local bluegrass/square dance band afterwards. But no costumes - Samhain doesn't include that rather late "tradition".

Sweet, sweet post alive with images and memories of family and children. I so enjoyed it. What a hubby you have!

CG, I LOVED this post. Made me nostalgic for "the good old days." Also, made me wish I had been visiting your house on one of those Halloweens! Fun family times... Your children were (and still are) adorable!

The last two pictures were so cool in the fact that your son's expression was like something from a scary movie! Great halloween shots!!

for me halloween is all about the kids. I love living in a neighborhood where we get tons of trick or treat'ers
the pics of your boys are wonderful as are your shared memories. thanks

Very nice post! I also miss all the happy Halloween hulabaloo that my children engaged in in anticipation of the holiday. I'm hoping to be able to do the same with my grandson one day!

I love the pumpkin curving custom you have! We don't have it in my country :)

It seems we miss-out on a lot in Oz where Halloween is practically ignored. This is because we have our big party day next week......The Melbourne Cup. We should combine the two!

Thank you all for the nice comments. I wrote from the heart this time. I miss those "little" boys. Everyone who still has children, cherish this time with them. It goes quickly.

Those Pirate outfits are hard to beat. Aaargh!

Such a shame we can't 'freeze' them at about 7 and 5, old enough to walk and not wear nappies, young enough to have fun with and hit the sack at 7! Happy Halloween. Mine don't know the joys of trick or treating, we don't do it here but we do still visit the streets with Christmas lights in December and big as they are, they still exalt an 'ooh and ahhhh!'

what a lovely empty nest post. It looks as though this is the first year my daughter wont be dressing up and wandering the streets.... she might be watching a scary movie though!

That brings back so many wonderful memories. We had much the same experiences, only it was usually very cold! Warm sweat suits under costumes. Dads from the neighborhood all going together while Moms hand out candy. Great memories. Thanks for the reminder.

Yes,It's A Lovely time For Kids.Its good to Create Memories.

I didn't know birds liked pumpkin seeds. I should have saved the ones from my pumpkin then!