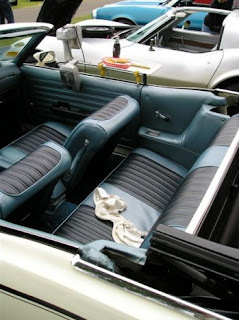 The very first thing that came to mind when I read the TT word was how we used to park to neck.  My fondness for parking knew no bounds as a teenager.  And I wasn't the only one.  Most of us girls operated under the constraints of remaining virgins until we were married.  Most of the guys operated with the intention of thwarting that plan.  To park and to neck was a pretty good prelude to some kind of sexual activity, you know, first base, second base, third base...HOME!   They called it "scoring".  How very male.

Interior shot from hotrodhotline.com
One of the great things about cars back in the day was bench seats.  Unless a guy had a sports car, the car had bench seats.  Bench seats allowed you to spread out, as it were.  You could lie down.  You could have sex.  You could just fool around.  It was comfortable.  Bucket seats were unsatisfactory.  You'd end up climbing in the back seat which was usually too tiny. 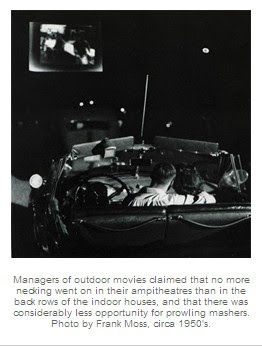 A favorite place to park was the drive in. What a gift!  An evenings' entertainment with a movie, food and usually some heavy necking.   If I was headed to the movies on a date, my parents didn't often ask "where?" They usually wanted to know "What movie?"  My father was much more concerned about the risque value of the movie than the risque activity that might ensue.  Of course, we usually double dated so he probably figured little would happen.  I remember one particular night on a triple date.  My best friend and her boyfriend were in the back of the station wagon.  Remember those little fold down seats?  His brother drove their parent's wagon so he was in the front seat with a new date, a nice quiet girl.  My boyfriend and I were in the middle seat.   His brother and my girlfriend were definitely hot and heavy in the back.  At one point she yelled at him, "Bill!  Why don't you ever cut your fingernails?"  I think my boyfriend and I started laughing but our driver was very embarrassed.  Some first date!
I actually recall some of the the movies I didn't really see:  "2001:  A Space Odyssey", all "The Pink Panther" flicks; "One Million Years BC"; "Planet of the Apes"; "Fahrenheit 451" and probably many more.  None of these movies mattered to us.  The ones that did, the ones we thought would be important or worthwhile, we dressed up for and went to the movie theatres in Westwood or Hollywood or Santa Monica. The experience was just better with big screens, great sound system, beautiful comfortable old theaters.
But I digress.  It's about parking isn't it?  I still think parking is a nice way to spend an evening.  Take a drive, go sit on a hill overlooking a city of sparkling lights or the ocean while you park on the sand or a drive in restaurant where you can still eat in the car.  I love cars and the joy I've experienced in them...and that includes parking!

Posted by California Girl at 2:06 PM

nice to see you today.
very unique and fine tuned take on the theme.

Yep, this brings back memories. My first car had a bench seat. Get the picture?

hehe. and i had a pick up truck...a little more roomy...smiles. wonderful take cali!

Ahh, the days of our youth...
You got my memory banks going full tilt... a long time ago...

It's a shame there are so few drive-ins remaining!

I never even drove until I was 20! Missed out on that whole car thing but then again, woldn;t ahve done me much good--nowhere to park a car anyway adn no girls in my school.

This was great - funny and entertaining. I quite enjoy your no-holds-barred style, and yeah, it brought back memories. The drive-in in my neighbourhood was gone by the time I was parking in cars, but there was always the stunning view of the city from the top of the hill. I can't go by there - ever - without thinking of the night a cop shone his flashlight through the passenger window!

What a great post to bring back fond memories! In Boston we used to say we were going to the submarine races when we went to the local reservoir to park. I also got a visit by a cop when parking with my future husband!

Haha area we great minds or fools? I used to check the movie synopsis in the newspaper so that I could answer 'questions' when I got home because oh yeah there would be a quiz. I was woken by staff once or twice after falling asleep in the back of a station wagon at the drive in. Ah those were the days. These days, I'm woken on a couch for snoring.

two awards for you.
Happy Saturday!
:)

Ahhh, yes, parking and necking, some of my fondest memories of teenagerhood. We sure knew how to drive the young boys wild, didn't we?

My first date with my husband was at the drive-in and we saw Romeo & Juliet, and knowing I would get in deep doo-doo, stayed for the second feature which was Barefoot in the Park. The most popular parking spot in our area was (and still is) called Gobbler's Knob. Don't ask. But since I lived out in the country, we usually just found an old deserted farm road or pullout...no cops shining their flashlights in the windows there!