Blue is not a favorite color of mine; I seldom wear it, don't care for blue rooms and find it makes me, well, blue.  On the other hand, blue is the color of the ocean , it's the color of the sky, all of which I adore.
A perfect blue. Yves Klein (1928-1962), Blue Monochrome, 1961, The Sidney and Harriet Janis Collection. Monochrome painting was defined by Yves Klein as an "open window to freedom as the possibility of being immersed in the immeasurable existence of color." He synthesized his own blue, International Klein Blue and used this pigment in order to evoke his boundlessness vision of  the  world, being blue the color of infinity.
from Pigments Through the Ages

Theme Thursday's color memes have taught me a great deal.  In school, I studied Color Theory and Art History but the research I do for the memes is teaching me Color History thanks to the historical, religious and cultural significances.

Blue is a primary color.  There are three:  red, yellow, blue.  Blue was not, however, the first color "perceived by man".  Red was.

Ancient Greece had no word for blue.  According to Wikipedia,


The modern English word blue comes from the Middle English word bleu or blwe which came from an Old French word  bleu of Germanic origin. In Germany, to be blue (blau sein) is to be drunk.  Drinking produces urine which was used to dye cloth blue with wood or indigo.

According to Pigments Through the Ages,  the first blue was made from a mineral called azurite. The Egyptians manufactured Egyptian blue but the process was lost. During the Middle Ages, blue came from azurite and ultramarine, an expensive mineral found in Afghanistan. During the 15th century, smalt was created by finely grinding up blue glass. Smalt was used for painting.The first pigment made by modern chemistry was a blue, Prussian blue, followed by cobalt blue and cerulean.

Blue is the color of fidelity which is why brides are always encouraged to wear "something blue".  The mineral lapis lazuli possesses life giving powers according to ancient Egyptian beliefs.  Blue colored hippos were made to represent the life giving properties of the river Nile. 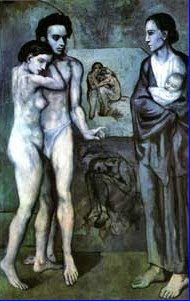 The color blue is significant in modern art.  Pablo Picasso's Blue Period refers to a series of paintings in which the color blue dominates and which he painted between 1901 and 1904. The blue period is a marvelous expression of poetic subtlety and personal melancholy and contributes to the transition of Picasso's style from classicism to abstract art.  from Pablo Picasso Blue Period 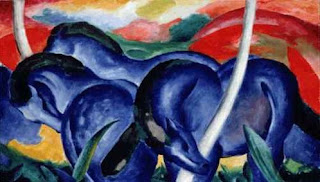 Wassily Kandinsky and Franz Marc published an Almanac in 1912 named "Blauer Reiter" (Blue Rider). The Publication was preceded by two expositions of the famous group of artists based Munich with the same name. Both painters loved the color blue and horses. Franz Marc’s blue horses became quite famous. In the Romantic times the Blue Flower mirrored Man himself as part of Nature.  Franz Marc
reached far beyond this concept in Blue Horses 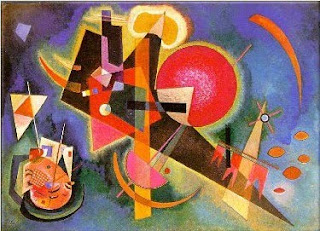 In the Blue by Wasily Kandinsky 1925

Russian painter W. Kandinsky wrote in his famous book "On the Spiritual in Art" in 1910:
"The inclination of blue to depth is so strong that its inner appeal is stronger when its shade is deeper. The darker the shade of the blue color, the stronger is its call into the Infinite, the stronger is the yearning for Purity and finally for the Transcendental."

Posted by California Girl at 8:36 AM

Very interesting! Blue is my favorite color, and I like all the shades of it except cerulean. Thanks for the information, most of which I didn't know.

fascinating trip throughthe color blue...interesting that they had no word for it as witht he water and sky the color seems so prevalent...nice pics to accentuate the blue as well. hope you have a great day cali! happy tt!

What a great way to get to like something- find out more about it! I found it fascinating. Thanks.

I like blue, in my wardrobe and in interior decorations as well as sky and sea and flowers... :)

I like blue and I love the blue sky which you know here in Cali we have a lot of blue skies. But I do not like blue houses for some reason. Well maybe a few but not many.

Thank you for all the info about blue, I never knew they had so much trouble making blue. Thank goodness it got easier because I do love my blue jeans.

No blue rooms? On my...my family room would send into a deep depression! LOL! :)

I have just bee educated on the color blue and loved it. I am pleased someone went down this path with Blue and with such brilliance. Nice. My Theme Thursday is HERE .

I studied art and art history as well the art is glorious. I never appreciated the monochromatic - not when I was working so hard to create something with volume

thanks for the study in blue

I'm at the bluemoon

Fascinating discussion of the color blue. I have an ornament of the blue hippo from some museum. His name (which they gave him, not I) is "Bill." And I really like the Kandinsky you used, but mostly for its use of the color red.

I enjoyed your blue collection. Blue and fidelity...I didn't know that. I agree with you about the ocean and almost put that in my blue post.

These are some intriguing facts about blue, one of my favorite colors, but one I don't wear a lot. I like light blue paired with brown quite a bit.

I love French blue too.

I've always known it was one of my two favorite colors and now I know why!

Wow!!! thank you for sharing all the "blue" information... I'm pleasantly surprised...

Love the Little Blue Horses. Blue has never been a favorite of mine... until this past year, I've become very attracted to soft blues, turquois, and seaglass colors.

It's also the third most popular color on flags!

Don't ask how I know that.

How fascinating all of this is. So much I didn't know before. Thanks.

Enjoyed your history of blue. I am fond of it when it has to do with BLUE JEANS or BLUEBERRIES! It is not a favorite of mine either.

Happy TT and have a wonderful weekend.

Sorry, just love blue. Well mixed in with a little white and yellow. Very interesting. I learn something new every day. Now if I could master remembering it . . that would be a coup

How fascinating!! Thanks for all that background on blue, particularly the last quote from Kandinsky. That is exactly how I feel about the blue of a late summer evening sky.

I have been influenced in my choice of computers and cars because their optics were blue...

I love Williamsburg blue, but I rarely wear blue. I'm a sage-y green person which has blue undertones. I painted the bottom half of my dining room blue, kind of like that azurite, only grayer and lighter, maybe.

They do look cute on your side-bar!!
I hope you are doing well ~~ It has been 102 degress in Richmond this week... Yikes!

Don't know on which blog you'll look for my comment, but about the painting and link, go ahead, and thank you!
When you go on my wordpress blog, you'll find out which blue is my favorite!:)

People sometimes tend to think, “if only I were a celebrity, everything would be better”.

However there are several troubleshooting steps you need to perform in order to determine the problem.

Every now and then, new stars emerge and disappear in the blink of an eye and every smallest detail about the same becomes important celebrity news.