I am a "Mad Men" devotee.  I watch it every week, without fail;  have since the beginning.  If I can't watch it, I record and watch it later.  Sometimes I'll even watch the new show and it's encore (back-to-back) to better understand the ins and outs of the characters.  There are many layers in these shows;  if I'm concentrating too much on one plot line, I may become confused by another.  I haven't had this much fun since "West Wing" my all time favorite series television.

I was initially drawn to "Mad Men" for several reasons:
From the get go, I was pretty much hooked.  I had problems with the one-dimensional aspects of many of the characters and the stiff unyielding, pathological behaviour of Don Draper and his icy wife Betty. 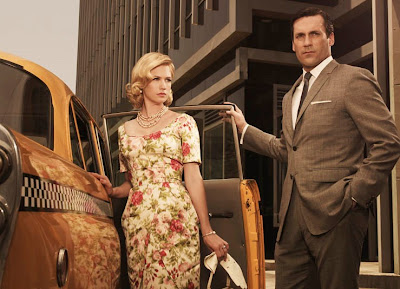 
But over the past few seasons, the writers have sought to flesh out the characters, explain some of their behaviours and make them more human, more likable and identifiable.

Last night's season finale tied up a number of loose ends while moving forward with new plots, new options and a wonderful promise for the next season.  For a well-written review, go here. 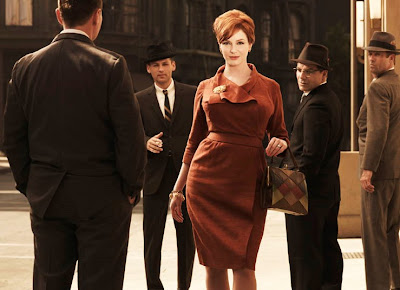 I am super happy to see Joan Holloway back.  She's way too smart for her husband and the rest of the "boys" in the agency.  It will be interesting to see where they take her.   She's been under-utilized this season and she was always too good to be Roger Sterling's plaything.  She's a dramatic foil to Betty Draper's picture perfect but deeply unhappy suburbanite and Peggy Olson's passive aggressive not-quite-but- almost-feminist.

Last night's show was one surprise after another, the biggest (in my opinion) being the agency principals risking their way out of a planned scenario orchestrated by their British owners who've surrepetitiously sold the agency to one of Madison Avenue's most fabled firms, McCann Ericson.  I wonder what the folk at McCann think of that angle? 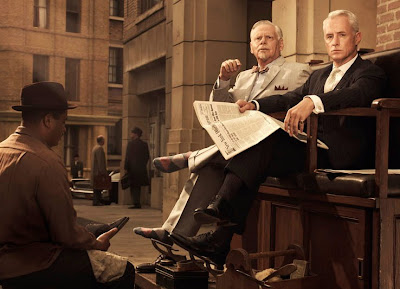 One of my favorite aspects to the show are the costumes and set decor. The shows' creator, Matthew Weiner, is reported perfectionist when it comes to details.  For those of us who grew up in the Fifties and Sixties, it's a true blast from the past.  The costumes are beautiful too.  I love to see the fitted bodices over flowing skirts of billowing fabric, the sheaths, the gloves, the hats. 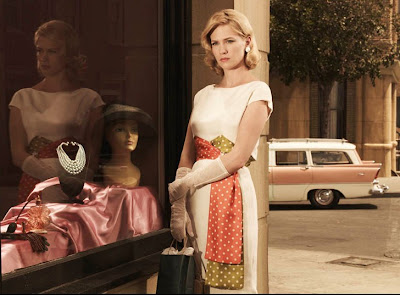 I just wish the show were on air for a longer season. I've no idea why the producers keep it so short.  I
thought it began as a mid season replacement for something else (can't remember what) but now, it's so wildly popular, one wonders at the limited amount of production.  Perhaps that is all about wanting what we cannot have?  Kinda like in the show...

all photos by Frank Ockenfels 3 from amctv.com
Posted by California Girl at 2:06 PM

ok, i am intrigued now...i have never watched it before...seems i may have been missing out...

Sounds good. One issue I have with TV and film versions of the recent past is how period clothes were thought to have been worn.

The classic case is the 1950s and leather jackets. According to movies and TV, just about every social misfit wore leather... and it's further assumed there were lots of rebels, greasers, punks, etc. in every school and at every drive-in.

Same goes with 60s clothing .. the stuff of Mad Men or the thought that every kid had bell bottoms and wanted the hippie look is not exactly correct.

It all makes good TV but the vision is a super saturated version of what really happened.

okay, guess I am going to have to find the past episodes on video. You've got me. Sounds like I have really missed out!

And, I LOVED West Wing. It is probably my all time favorite.

I've not seen it but have to say the clothes look fabulous.

BTW, who is this artist on the side bar? nice stuff there.

Brian: It's an intriguing show, sometimes uneven week to week, but overall alot of fun.

Bill: I agree with you and I know the clothing in particular reflects the styles of those years without being exact. My father wore a fedora all his life. He never gave it up. They became less of an accessory by the late Sixties but Daddy always said it was "stupid not to wear a hat if your head was cold." All my friends knew him by his hats. As for bell bottoms, I wore them from the time I was 14 til I was 16 or 17 and they went out of style. Anybody remember crop tops?

...mmm: Artist on the sidebar is my girlfriend Joelle. Her web site is:
www.joellefineartdesigns.com
You should be able to double click
any of the images to go there; same with any of the art I post.

I don't think we have it here. Then we tend to buy every American cop and CSI style show that was ever made! Certainly looks like he has an eye for detail. My mother used to dress like that and my father always used to get cranky at us kids sitting on his trilby which was always perched on the back seat of the car!

Sounds like a great show that I would love to watch. Thanks so much for sharing and for the review link!

Every time I see a commercial about this show, I feel compelled to check it out but I never do. And I hate picking up on shows in the middle... I guess I need to see about getting a hold of season one. It looks very interesting, and your depiction of it only further peaks my interest!

Marguerite: Yes, I thought it was an intriguing review.

A male friend of mine has referred to Peggy as his role model. I think it needs to have a short season...dramas generally have become more and more elliptical, so that to watch an older drama- well , they can kind of thud along.

AS: you may be right. it certainly leaves the viewer wanting more. As for Peggy as a role model...I see her as a transitional woman who will fully embrace the women's movement when it hits. she'll bust some cojones for sure.

I've entered a contest to win a walk-on role on that retro-licious TV show, "Mad Men".

If you wouldn't mind taking a couple of seconds to vote for me, go to my blog, or copy and paste the following link which goes right to my picture: