Baseball Season Right Around the Corner! 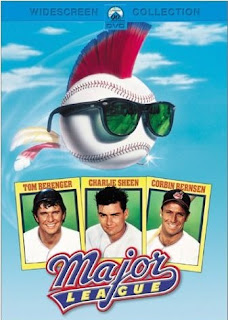 Yesterday, from our sick beds, my husband and I were sorely in need of comic relief. I recently purchased "Major League" a favorite of mine at a $5 bin in Wal Mart so I put it on. For two solid hours we laughed ourselves silly while parroting the lines we've come to know so well:

"JUST a bit outside."

"Forget about the curve ball Ricky. Give 'em the heater!"

"Remember fans, Tuesday is Die Hard night. Free admission for anyone who was actually alive the last time the Indians won the Pennant."

I could go on and on but it's better to rent the movie and watch it yourself. They aren't as funny out of context anyway.

I have planned for the past year to write a long post about baseball movies I love. There are so many. None as funny as this, however. It's a classic. Crude, rude & seems pretty spot on. It always makes me laugh and it always makes me miss going to baseball games. I no longer live anywhere near a major or minor league field so I watch it on television. Last year, we attended one major league game in Cincinnati while visiting friends. My favorite team, the LA Dodgers played the Reds. I was particularly excited to see Joe Torre as the new manager. I respect his abilities greatly.

Posted by California Girl at 12:09 PM

Every time Wild Thing comes out from where ever they keep relief batters and the crowd goes wild singing WIld THing and he is wearing those goofy glasses....well, I get chills!!

Don't know this movie but there's nothing like a good laugh to chase the virus away. Hope you feel better.

Alphawoman: Welcome! just looked at two of your blogs and it looks like Just a Hippie Gypsy is your newest adventure. I'm wondering if you are in Indiana now? I wasn't sure where you referred to the Wild Thing tune? If you're in the KY area, you could be going to Cincy games? What a fantastic ballpark.
Please visit again.

RL: I like the hockey quote. I should follow hockey, living so far north in hockey land, very French up here too. But no.

I, too, love baseball movies, as well as other sports movies. The Rookie, The Natural, The Replacements, Hoosiers, Coach Carter, Remember The Titans, etc come to mind.

"The Pride of the Yankees" is another fave. waaaahhhh!!!