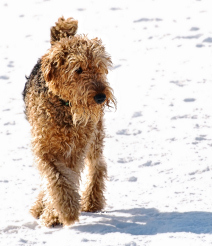 I grew up with a wild and crazy Airedale named Daisy. We picked her out of a litter when she was a pup.

Our first dog had been poisoned by someone in the neighborhood; very traumatic for a nine and six year old. My father did not want my younger brother and I to grow up without a dog so it wasn't long before he announced we should get another, this time a pure bred.

I wanted a poodle. My mother had a cousin in the area who raised toy poodles. Poodles were all the rage in those days. Her cousin, Anna Mae, bred apricot toys. They were the cutest little wriggling balls of curly peachy fur with tiny black noses and bright brown eyes. I can see them now. My mother was all for the poodle. Poodles are smart dogs and a small one seemed manageable.

Dad was having none of that. He wanted a terrier. I don't know why. He found a breeder of Airedales and off we went. When my brother and I saw the litter, we gravitated towards the runt. My father warned us the runt was not the best pick but we didn't care. Home we went with our new baby girl in our laps. I don't recall who named her but she was, forever more, Daisy Dumpling.

Daisy was an energetic dog to my mother's everlasting annoyance. Mother hung our clothes outside on a clothes line. After Daisy arrived, she would tear them off the line in delight, running amok & depositing the sheets and towels and bras around the yard. Our rooster, Henry and his five wives, didn't fare much better. Tinkerbell, our first dog, had been a Lab mix, gentle & quiet. She didn't mind the chickens and they didn't mind her. But Daisy thought the chickens were her personal playthings. One day my mother came home from the golf course to see Daisy in the back yard, tossing a big ball of white around. Mother soon realized it was her favorite hen, Fluff. Daisy eventually killed every one of those hens by chasing them in circles til they dropped dead. Henry was mean enough & tough enough to survive her. He'd just claw her.

When I became a teenager and started smoking cigarettes, Daisy would lap at the smokey air as though it were a special treat. When we smoked joints, we'd blow the marijuana smoke in her face and she'd get stoned. She became a bit unreliable in those moments.

When Airedales are small, they are mostly black with brown markings. As they grow up, the brown becomes more prominent in the face, ears, legs and underbelly. The black resides mostly on their backs. Daisy was never large and she was somewhat off. My father attributed that to her being the runt. He loved her dearly and called her his "clown". She was loyal, fierce, funny and smelled to high heaven. Airedales have this oil in their skin and it stinks. No matter the bathing, they smell. She drove my mother crazy.

Daisy lived a long life. We introduced her to a cat named Rasputin and they both survived. She was supplanted somewhat in her dotage by a new dog, a pound dog, named Noodle. Noodle began to position herself as the alpha dog when Daisy was old. They had a fight one time and Daisy was hurt and she did not recover. My father blamed himself.

It is the natural order of things that the strongest survive and prevail. Daisy had a wonderful life and was loved and cared for and my dad really had nothing to reproach himself for. But he was a softie when it came to dogs and he never forgot nor forgave himself.
Posted by California Girl at 5:06 PM

I loved this post. Sweet and funny. Anyone who had a dog during the 60's and 70's passed on a sniff or two of pot! (And they do get stoned!) Animals add so much to our lives. They are funny and loyal and dear. We have always had dogs - currently a black lab named, Lucy. I think Lucy has been my husband's favorite, although he won't admit that. We had two golden retrievers who were with us for their lifespan, and I agree about not feeling bad when their time comes, as long as you have given them the best life you can. But I also know that is easier said than done.