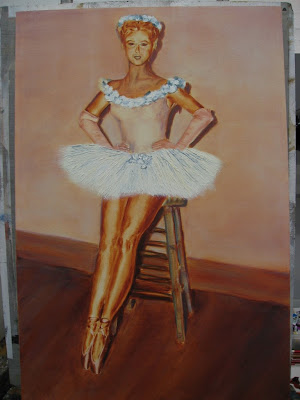 One of my dearest friends, Robin, has painted an oil portrait of her mother, Doreen. It is a faithful reproduction of a photo which hung on a wall in their home when Robin and I were growing up. I loved that photo. Her mother was so delicate and beautiful...a little girl's vision of herself grown up.

When the original "That's Entertainment" debuted in the early 70's, Robin and I saw it together. We spent the entire evening picking out her mother again and again and again. It is much easier to find someone you know on a full sized movie screen than on a television screen. I know because I watch those movies whenever they're on tv, always looking for Doreen.

The most touching thing about it all is how a wildly sarcastic 16 year old girl (me) tried to imagine the slightly frazzled middle-aged woman I knew as this lithe, beautiful ballerina. Doreen turned 85 this year and Robin is surprizing her with this painting which, I think, is a great tribute to a lovely lady.

Posted by California Girl at 4:58 PM