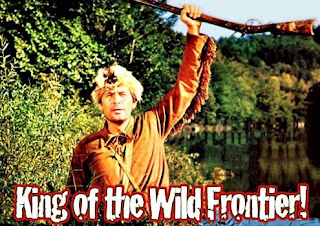 Davy Crockett is dead.  Fess Parker, the actor who portrayed the famous frontierman, died Thursday at his home in Santa Ynez Valley.  He was 85.

My husband had a coonskin cap.  My brother had one as well.  Most boys I knew growing up ran around with little fake frontier rifles and caps and played at cowboys and Indians.  All of us eagerly watched his show on the Sunday night "Disneyland" as it was then called..  According to this sentimental op-ed in the NY Times,  Fess Parker suffered a great deal playing the iconic Crockett.

He retired to the northern part of Santa Barbara County in the beautiful little town of Los Olivos.  He opened a winery.  My husband, friends and I visited the winery back in the '90s and tasted some of the best wine we'd ever had.  His label fetches good prices.  Try it and raise a glass to the man who made the coonskin cap a Boomer legacy forever.
Posted by California Girl at 10:48 AM

"Born on a mountain top in Tennesse, greenest state in the land of the free. Raised in the woods so's he knew every tree. Killed him a b'ar when he was only three. Davy, Davy Crockett King of the Wild Frontier."

Loved that show and I loved Fess Parker. He was a "real" gentle giant. R.I.P.

I loved Davy Crockett. Thank you for the link to the NY Times and your tribute to Fess Parker. He always seemed a true gentleman. I'll raise a glass to him.

I've got my usual wine, which I will drink tonight with a toast to Fess Parker. He lived a good, long life, and I hope to live such a good one...

I don't remember seeing him as Davey Crocket but definitely many childhood hours were whiled away watching Daniel Boon.

Susan: great memory! I can only remember the first and last lines. My father used to sing it to us @ bedtime. He'd also sing it about our Airedale, Daisy. He loved that dog and he called her Daisy Dumpling and he'd sing "Daisy, Daisy Dumpling..." and so on.

Tanna: Well, I need an excuse to go buy some of his wine and I thought the NYTimes piece was a lovely reminiscence.

Baino: That's the interesting thing about the Times piece. Mr. Parker apparently was extremely stressed during his Davy Crockett years but he later came back to kinda do it all over again as Daniel Boone. I think they both died at the Alamo.

my mom told me as i was driving back yesterday...sad. the kentucky headhunters did a great rendition of the song...