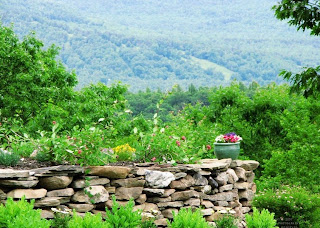 Hand built stone wall holding up our flagstone terrace
My family and I are in the final stages of moving from the house in which we raised our children to the large rambling home of my mother in law.  As you can imagine, it is a move fraught with emotion. 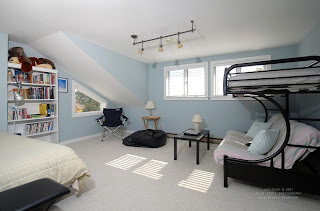 Boy's room
We had been talking of selling our home for a number of years, back at the top of the market in 2005.  We had bought a split level home on top of a mountain in 1998, moving in Thanksgiving weekend.  It had spectacular views, alot of potential, and not much else.   The boys were 11 and 10 and we'd lived in New Hampshire a year.  The house had promise and we made an acceptable offer.  We moved in Thanksgiving weekend.  We began renovations the following January.  We never looked back. 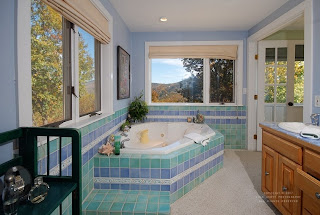 Master Bath created  circa 1999
As houses go, it was spacious, with large rooms and a fairly open floor plan.  It was built on a slab, something Californians understand but New Englanders do not.  The bank had a heck of a time finding comps for the appraisal.  We were getting a good deal and we believed we'd make money on it.  The views were too good, we had closet space galore and three bathrooms, soon to be four.   Our seller, the original owner, had installed an odd assortment of fixtures, cabinetry and bathroom appliances from various and sundry projects on which he'd worked.  The bathrooms had flesh toned fixtures,  the cabinetry was left over from a condo project on which he had additional pieces.  His electric work was definitely not up to code but the house was sound and he was a good guy who installed a new heating system and replaced the roof before we moved in. The negatives were an unfinished downstairs, mostly exposed concrete slab, a dingy, poorly designed kitchen, and the dirt road on which we lived..    The positives were the large rooms, the front porch we would turn into our living room, the 270 degree views and the national forest abutting our property.  We had privacy and a safe yard for the dogs. 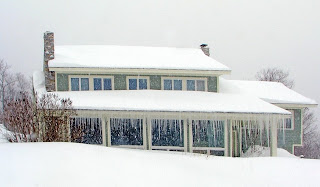 Winter at our home
Posted by California Girl at 11:51 AM

Boy, those kinds of moves are tough. I've left a lot of good friends and memories in quite a few places. I hope this one works out well for you and maybe this time it will be permanent. I know never to say never.

My husband learned in a seminar once that moving is one of the most stressful events one can encounter. And it can take up to 18 months to really settle in and feel like it's your home. Give yourself time. :)

we have moved wuite a bit...but i guess this is a little more than moving...i feel you...

A good person like yourself will change anything into a nice home.

So this has been what you have been up to! Waiting for Part II...

Any time that you leave a home where your family was raised, it hurts.

I loved that beautiful house too, so I can understand how hard it must have been to leave. But a large rambling home sounds pretty nice and I'm sure that you'll turn it into a gem, if you decide to stay there. Hang in there, cher, and have a wonderful Christmas!

Aww Cali, I know a couple of people at the moment who are or have moved for various reasons and feel the same way. One of my Irish commenters had to transplant her family to England because her husband couldn't get work in Ireland and another friend in the US had her mortgage foreclosed. Whatever your reasons for moving, it's sad leaving a house that has 'picked' you. There's time I'm sure to find something that you will love. Have a good Christmas even if it is on unfamiliar territory. Minka seems to know you better than I . .but I'm sure you'll find the perfect refuge.

Yes, I'd say leaving that location and the home you created from good bones would be hard... and the memories. But, I know your next stop in the journey will be good, too. So glad to hear from you!!!

My best wishes to you and your family for a very Happy Holiday!

Susan: It is indeed one of the five great stressors in life. I don't have them memorized but I know a couple of them include DEATH and DIVORCE. Those two probably follow MOVING!!! HAHAHAHAHA!

Brian: thank you for the feel. hahahahahaha! (can you tell I'm in quite the mood today?)

Minka: what a sweet thing to say and thanks for the "good person" part. I am anything but when I get irritated. Luckily, there are pills for that!

Marguerite: We're in a holding pattern at the new place. Waiting to see if the MIL can adjust to the invasion she requested. sigh.

Baino: Never thought of it in terms of the house picking us but that sounds exactly right. It did indeed.

Noni/Tanna: Yes, the house has good bones. I'm not crazy about the farmhouse but my husband thinks it will clean up nicely. He's the expert, not me.

PKat: Merry Christmas, Happy Holidays and all the best to you too.