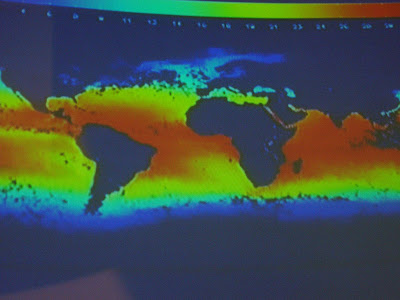 Wednesday, April 22nd is Earth Day. Perhaps that is why TT picked the theme to be "earth" just prior to its 39th anniversary. Hard to believe it's been 39 years. That would be 1970. I think I remember it but it is vague in my mind. Of course, everything from those days is vague in my mind.

In 1970 we were concerned about the environment but in a conservationist sort of way. We were still embroiled in Viet Nam and just becoming aware of environmental issues.

I serve on a local chamber of commerce Green Team steering committee. My initial interest stemmed from extended exposure to the environmental concerns of Southern California. We went through everything from severe droughts to mud slides, from gasoline shortages to the proliferation of the Honda Civic as a gas saver. That's what made them famous in the U.S. By the mid-Nineties we were reorganizing and recycling in earnest.

California is such a large and populous state. It's always going to experience the detrimental effects of overpopulation and pollution. I mean, what can you say about a state whose largest city, Los Angeles, is dependent on water coming from four other locations outside the city and state? They do not have any way to capture and recycle rain water. It all goes down the gutter. Mass trans in LA is a joke. Everybody drives their cars and sits in gridlock day after day.

A few years ago the debate was whether or not global warming was real or manufactured by the bleeding hearts and liberal Left. Now the debate is about how fast is it coming and whether or not we have time to save the planet and ourselves.

The Green Team is celebrating Earth Day with a Community Garden kickoff. We haven't had a community garden in our small town for a few years since the last one, a family farm coop, folded. Everyone is very excited. 47 people came to the initial meeting. Our group has succeeded in getting the land for the garden donated and we're now working on tools, vegetable and flower seeds. The soil has been tested and it's very healthy. We are psyched!

Just for the record, I do not think we are doomed. But we are on the precipice of a sea change. Before his transformation, Scrooge endorsed "reduce(ing) the surplus population." Of course, the only thing he had in mind was ridding the world of the needy who relied too much on the rich... kinda like the Bushies. But overpopulation and over development are at the root of much we now suffer.

Subscribe in a reader
Posted by California Girl at 10:15 PM

I feel your L.A. water-starved pain. My area, in upper northern California, is one that sends water to L.A. Part of president Kennedy's Central Valley Water Project. But with you, I will gladly share.

telling post. the community garden sounds great, and who knows may even be a chance to meet some neighbors. seriously, thanks for all you do, keep fighting.

A nice view of Earth Day thru the years - good to get the CA perspective! How cool that your community is starting a garden.

I love the fact that you are on a Green Team.

I was 7 in 70. I remember Give a Hoot- Don't Pollute, Pollution Probe around that time. In subsequent years we always did a clean up and there were always a plethora of projects on "Pollution"

I don't know where the turning point with our kids was when it was cool to ignore the earth, shun peace and play nothing but agressive computer games. When did that happen?

Very interesting. I hope the new community garden is a blooming success!

I like it. I do believe that basically much of everything comes down to overpopulation. The world is only so big and can sustain so many.

Oh, now about this "steering committee". I think it's unwise for more than one person to try and steer ANYTHING! You don't see me and my wife both trying to steer the car...

I didn't know Earth Day started in 1970, could be to the new baby boy I had on March 1st that year. I don't remember much about that year except I had a colicky son.

You'd think, after all this time, we'd be further than we are ; (

Since the days of water rationing and turning lights out etc when not used, I'm surprised people out here still don't do it that much.

I idn't realize your TT posts were here, sorry ; (

I was just wondering if it has warmed up yet where you are. They are expecting us to get into the 90's this weekend. Yes we are so overpopulated here now. I am so glad I do not have to drive in rush hour traffic any more. I remember at times that it would take 30 minutes to go about 50 feet. You are spending so much time just sitting there. Plus everyone speaks different languages and in some areas you actually feel like you have traveled to a foreign country. Signs are not even in English, and so you cannot shop in them cause you do not know what they are selling or what kind of business it is. When was the last time you were here. I hope in about 20 years everyone will have assimilated into speaking english or we will all be speaking spanish.

And something needs to be done about public transportation. Taking the metro train is fairly easy, but once you get off it is almost impossible to get to your destination unless someone comes and picks you up, then you are stuck in that traffic. If they had shuttles to take you to your jobs than that would help, or a fold up bicycle that could be carried on the metro would also work and be better. I think so much could be done that is not being done. We also need to make bicycles with the side cars to transport two people or things like groceries, would be good too. We would lose weight and save the environment, two pluses in my book.

I really like the idea of a community garden, the friendships that are formed there have to be great. And people helping people has to be a win, win situation for all who join up.

Thank you for sharing this. God bless.

This is a great start but still so much to do. Waste is one of the biggest problems. We consume faster than we can recycle most items; most of which still ends up in landfills. Or dumped off shore.

I agree we need to change to help the climate. But I've often wondered why there hasn't been some real incentive to move into more rural areas and decrease some of the population in already congested cities. I'm not talking about cookie cutter suburban messes, but cities with an epicenter and appropriate public transportation, sidewalk and bike lanes. Making them pedestrian friendly and green all the same time.

I love that your town is celebrating Earth Day like this. Hooray!

Best of luck to the Green Team ! Sounds like a great project, C G.

This is the first warm day (it is 70) we have had since last October. Such a bitter cold winter makes days like this all the better by contrast. I enjoyed your view and The art by Joelle is stunning.

Wow, I was 17 in '70 and totally clueless. But my sister had one of the first Honda Civics. Back then it was CVCC and then they changed it so people could say it as a word. I'm not sure what the letters stood for. I'm guessing the last two Cs were for catalytic converter.

I've progressed a lot over the years. Composting, energy-saving, recycling, etc. In the summer, I even save the dishwater and water plants with it. I'm finally getting a clothesline again after too many years of not having one.

So great that you're involved in community gardening and on the Green Team.

Too bad we didn't all jump on the bandwagon back then, and maybe the car manufacturers would have listened to us instead of the oil companies. But it is never too late to begin a massive green movement. Whether or not it is too late for the planet, is another issue. Love the victory-garden concept springing up all over. Nice way to commune with neighbors.

Thanks for the history lesson. It always surprises me that Earth Day has been around for such a long time though it has gone through a certain transformation.

Good luck with the Green Team.