I was in my house on the mountain with the kitchen contractor, the electrical/plumbing contractor and the heating & A/C guy who was cleaning our oil furnace.   It was the first meeting of the minds with respect to completely gutting, re-wiring, re-plumbing and renovating my kitchen.  It was going to be beautiful.
The phone rang.  It was close to 9AM.  My girlfriend in San Diego was calling. It was three hours earlier, her time.
"Where's Scott?"  she asked without preamble.
I hesitated, wondering why she was asking this question at this hour.  "He's at work."
"Is he on a plane to D.C.?" she responded.
"No.  Not today."  My husband travelled regularly on an American Airlines shuttle, Boston to D.C. "Why are you wondering about Scott?"
"A plane from Boston just hit the World Trade Center.  Turn on your tv."
I ran into the den and turned on the television.  I called in the guys who were there to transform my kitchen.  As we stood together watching the news, the second plane hit the second tower, live, in real time.  But it was so unreal. 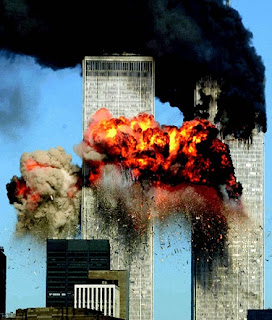 My father called next.  I don't know if he called before the Pentagon was hit or after the fourth plane, hijacked towards the White House, was sacrificed by the brave passengers aboard, crashing into a field in Pennsylvania.  Dad was a WWII veteran. He had no illusions about the planes.  He had seen the country under attack before when the Japanese bombed Peal Harbor.  He was crying.  As far as he was concerned, we were under attack and it was WWIII.
I didn't know what to think or believe or do.  This was a moment of incredulity so great I could only sit and watch the videography play on the news, trying to wrap my mind around the images.  I called the school to find out if I should pick up the boys.  I called my husband to make sure he was okay.  I think it was a Thursday.
I still run into the men in my home that morning.  They remember me and where they were because of what happened.  Incredibly enough, I am again working with the kitchen contractor on a new plan for my mother in law's house.  He commented on the timing of the project.  It's identical to our first project together nine years ago.
"I hope this doesn't mean something bad is going to happen again, " he said to me.
Terrible incidents are like that.  Their moments of revelation never leave you.  And you know just where you were. 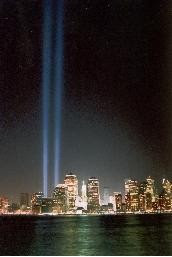 Posted by California Girl at 12:18 AM

Hi! C.G.,
I was just awakening...when I heard the news. (sometimes I fall asleep with the telly on...and upon hearing the news...)
...I quickly ran downstairs and told my mum...who was "staring" at the telly with a "blank" look on her face.

it is a little hard to read all these today...remembbering that day...as you may remember i was in the air that day and emergency put down in ATL...we saw the tower go down then they cut the tv...10-15K people in teh airport with no where to go, far from home and in shock...it was surreal...and the tragic loss of life...

I was sleeping (I lived in CA) and my husband came running into our room: "Come and see this!" We went to the TV in time to see the plane hit the second tower, real time. My husband's from NYC and has family there. We couldn't quite comprehend what was happening for a long time but watched with incredulity, sadness and fear.

I was at work having an annual review. One person had a small TV in her office and we all gathered around it to watch the horror. Many tears were shed in disbelief. Still are.

One never forgets...and I don't think we should.

I was with 25 first graders when my daughter called to tell me!!! I thought it was an accident at first. I couldn't stop myself from watching it on tv. So horrible!!

What a somber day. There really are no words, but thank you for this post.
xoRobyn