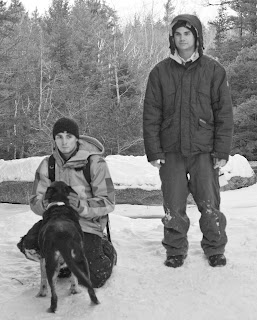 We called our eldest son last night to tell him his University was cancelling his classes because he hadn't paid his tuition.  This has happened before so we weren't surprised.  However, when my husband spoke with our student, he was irritated to some extent but then said, "I don't want to pay for classes I don't need."
He needs six more units til he can graduate.  He has been paying for college through student loans via the Federal Stafford loan program.  It's cheap money but they have requirements, one of which is "half time enrollment" up to each school.  In his case, I believe it's 10 units.  But, for some reason, he's decided to take only the six units he needs even though he does not have the money to pay for them.
My husband's theory is  he is afraid to graduate and start his life.  We discussed this for a while, trying to remember how we felt.  I remember graduating with my B.A. Liberal Arts in English Lit.  I was very well educated but not trained to do anything.  My husband took a B.S. in Child Development and went on, after a few years of marriage, to get his MSW so he could be a social worker.  We struggled for a long time and I know how this feels.
My son will have to start his life regardless because the federal loan criteria requires ongoing presence in school or you start paying back the loans until you return to school.  Son #2 is currently paying $101.00 per month for a small amount of loans he took during his two stints in college.  Soon #1 will have a much higher bill, I'm afraid.
How do you guide your child at this point in their lives?  He's 23 years old and has, for all intents and purposes, been independent from us and our financial help for over three years.  We are very proud of him because of this.  He scrapes by as a part time waiter.  School funds give him the additional support he needs.  He's studying Environmental Studies and we think there are many directions in which he can go.  But, we think he's scared.
If anyone has gone down this path, I'd love to hear about it.
﻿

Posted by California Girl at 9:52 AM

C.G. said,"My husband's theory is he is afraid to graduate and start his life..."

Personally, I experience something similar to what your son, maybe going through when I was in college. (Afraid to a certain extent to face the world outside of those "hollow halls." However, let me be perfectly clear I'am not sure if your son is facing the same dilemma that I went through.)

C.G.,
Thanks, for sharing a very open and straightforward post once again with your readers.

Generally speaking... I think at that age one tends to hold on strong to opinions one does have and finds it hard to look into the future with a realistic concept of things like how loans might come to be a heavy burden down the road if all does not go according to plan. It's usually also easier to listen to friends rather than one's parents... ;) From my own experience I also think there is a big difference between feeling encouraged vs obliged to live up to expectations. Have you told him how proud you are of him? "Flattery" sometimes opens up more doors than "advice"...

i would encourage him...share your opinion, let him know the consequences you see and let him make a decision, and tell him he is the one that must make it...sometimes, esp at that age, you have to let them do it...

If he's paying for school, then the consequences are his and he'll figure out what to do about them. If he asks for advice, you have your opening. Otherwise, you don't. Have you told him how proud of him you are though? Everyone needs that kind of feedback.

Dee Dee: we're not sure what he's going through. When he was home this summer, he talked about how tired of school he was and he wanted it to be over. In his words, "I hate school." I pointed out he has so little time left for a degree and to "get it over with." I know he knows this is true. But he's just not feelin' it. He did tell us he didn't know what he would do when he gets "out of college."

Dawn: not sure who he's listening to if at all. He does know how proud we are. We are very loving to both kids (even when they are driving us berserk).

Brian: In my heart of hearts, I know I have to let both my sons go. I have in so many ways but things like this suck me back into the throes of the worried parent. Bryan (my Bryan) knows what I/we think. I'm not sure what HE thinks.

Grandmother: You are right about that. He is, ultimately, paying the bill which, by comparative school loans, is minimal but still in the low twenties.

Thank you all for your considered responses & thoughts. XO

Two things I communicated to my kids in college: you need to make it on your own eventually, but if you fall/stumble I'll be there to pick you up/help you out.
I think you can make it, because you are smart/capable, etc. Let me know how I can help you best!

My own opinion about it is that right now people in college do not have much to look forward to - it's so hard to find a job for experienced people with a degree. For people just out of college it's even harder.
Also, it has been quite common in the past decade for seniors to suddenly lose all motivation!!
Further, I wonder if he wants to do further studies?

They say that as long as someone is in school, he/she is still an adolescent (even thou people are in their twenties).

Jeanette: They don't have much to look forward to although I think he could get a job in the USFS. One of my friends is a ranger with them, thirty years now. She loves it and says they're always looking 'round the country. He's also talking of going back to Costa Rica where he spent May of this year studying environmental issues.

Delaying life is a big problem for today's young people. And when one reads the daily news, one can certainly understand why...very few job prospects. It's wonderful that he is independent (I wish our daughter was), and I hope he isn't digging himself into a big hole of debt.

Do we ever stop worrying about our kids? I don't think so.

I understand where you are coming from. My daughter and son-in-law are perpetual students and have racked up quite a large debt going to college, and continue to do so. They get one degree and then start working on the next one. But since they are financially independent,
and both hold down jobs, as well, I do not interfere or give advice. I feel that it is their life and their choice.

Oh dear. Just having the degree will bump him up to a different salary bracket than if he didn't have it. When I graduated and started my first job my boss told me I made 15,000 more a year because I had a diploma! Your son is so close...tell him it will pay for itself many times over!

I think this is common - especially in this economy. Our youngest is returning to graduate school, with our help, this month. But she is only taking two classes! She dropped one! I have to admit, she works part-time, but it is costing us a handsome sum each month - we want to to get it over with, already! I do think there is some arrested development with this generation.

This is very fine web site, thank you and look at that [url=http;//ciufcia.pl]gry dla dzieci[/url]

Hi - I am definitely happy to discover this. Good job!